Originally seen on CBS-TV in prime time from October 14, 1961 through September 12, 1962, The Alvin Show was based on the popular Chipmunk records. The records were sung by Ross Bagdasarian, who supplied the voices of David Seville and all three of the electronically altered Chipmunks. Bagdasarian first employed the technique of recording singing voices at a slow speed, then playing them back twice as fast, for his 1958 hit record "Witch Doctor". Bagdasarian's children, Carol, Ross Jr., and Adam reportedly thought the sped up voices sounded like chipmunks. Bagdasarian, who originally planned to make the characters rabbits or butterflies, listened to his children and introduced Alvin, Theodore and Simon later in 1958 on "The Chipmunk Song". The recording was a smash hit, selling more than four million copies just seven weeks after it's release.

This is the ending to "The Alvin Show" featuring the Viacom "V of Doom". As...
Posters 0
mikee_kid12
Alvins World: Space Cases pt One
Alvin Hiccups takes you through his life of dissappointment when it comes to television. In this article, Alvin gets very upset when his favorite show 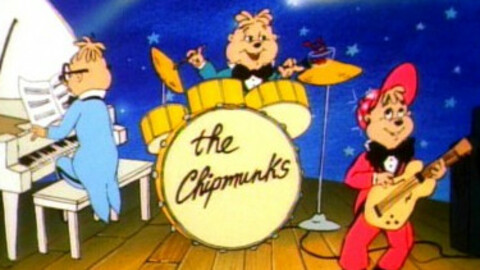