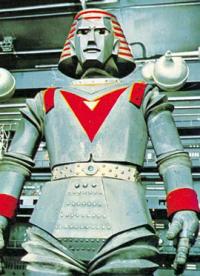 An ordinary boy, Johnny Sokko, is swept into an extraordinary adventure. While on a voyage he meets a curious but friendly man, Gerry Manno, who secretly works for a TOP SECRET organization known as UNICORN. When an alien terrorist group known as the GARGOYLE gang attacks their ship with a giant monster, Johnny and Gerry find themselves on an island base were a disgruntled scientist is secretly constructing the most powerful robot known to mankind. The scientist shows them the robot and a wristwatch control device that once spoken into will place the giant robot under that persons control, Johnny impetuously grabs the watch and gives giant robot his first commands. Johnny gains control of the robot and all of his awesome powers and must help UNICORN defeat GARGOYLE and the evil Emperor Guillotine.

1
Quote O' Matic
Johnny: "Thank you, honey, this is a beautiful party! You invited all my friends. Good thinking!"
Added By: Clint_Olson
The Room
An unhandled error has occurred. Reload Dismiss