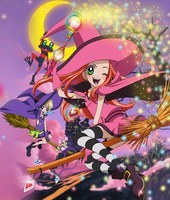 an anime television series produced by Studio Pierrot, which aired on TV Tokyo from July 2, 2005 to June 24, 2006. Sugar Sugar Rune won the 29th Kodansha Manga Awards in the children's manga category.In the Magical World, the future queen is chosen by selecting two young witches and sending them to the Human World, where they'll compete to capture the hearts of boys. Whoever has collected the most by the end of the competition is crowned queen. This generation's Queen Candidates are best friends and polar opposites Vanilla Mieux and Chocolat Meilleure, the daughters of the current queen and her former competitor (respectively). They're aided by their assigned mentor and guardian, pop idol witch Rockin' Robin, and their two animal familiars, Blanca the mouse and Duke the frog. But the girls have more to deal with than just competing for hearts at school. There's something weird about the cool, mysterious middle school boy Pierre, who resembles the evil king Glace—and he seems to be after Chocolat. Now, both trapped within their own new goals, the two witches must fight their way and retain a friendship which no magic can defeat.