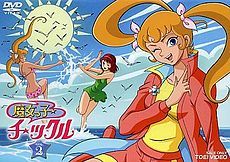 Majokko Chikkuru), also known as Magical Girl Tickle or Magical Girl Chickle, is a 1970s magical girl manga and anime by Go Nagai. Unlike Nagai's earlier (and more popular) Cutie Honey, Majokko Tickle is closer to the more traditional mold of magical girl anime such as Mahoutsukai Sally, and unlike Nagai's other, more popular works, was created for an audience of pre-teen girls.The anime television series was produced by Toei Company Ltd. (the main office, not the animation studio), with the actual animation produced by various other studios, including Nippon Sunrise. It consisted of 45 episodes and was aired across Japan on TV Asahi from March 6, 1978, to January 29, 1979. It brought the magical girl genre of anime back to Japanese TV screens for the first time since Toei Animation's Majokko Megu-chan aired its final episode in September 1975. Some episodes were scripted by Masaki Tsuji, a longtime friend of Nagai's and head writer on his earlier series Devilman, Dororon Enma-kun, and Cutey Honey. Go Nagai also wrote the lyrics to the opening theme song. Majokko Tickle is notable for being the first magical girl series to feature a "double hero" (Tickle and her human "sister" Tiko, or a "lucky pair" as they are referred to during the series). Reportedly the series was inspired in part by the popularity of Pink Lady, a female pop duo who were known for performing their songs and dancing in perfect unison and who sold millions of records in Japan during the late 1970s (they also later had a minor hit in the United States called "Kiss in the Dark"). Pink Lady had an enormous audience of young girls, and Majokko Tickle was considered an opportunity to capitalize on the similarity. In fact, one of Pink Lady's hits ("Southpaw") was featured in one episode, in which Tickle and her "sisters" Tiko and Hina watch the duo perform the song on TV. The Majokko tickle will be one of the last magical girls old series among Lun Lun and Lalabel and in fact the last before, Himitsu