Pappyland was a children's live action television show that began on September 1, 1994 and ended a few years later. The show starred Michael Cariglio as Pappy Drewitt, an artist/49er type character who lived in a magical cabin in a bizarre land with many different creatures and people. More than half of the show was shot on bluescreen. Pappy and other characters danced, sang, and taught life lessons and other children's television fare but, the main focus of the show was watching Pappy draw pictures. The camera was positioned directly above his paper and, he would carefully explain the purpose of each technique used. The purpose was for children viewers to be able to follow along with Pappy and create the same image as he did. 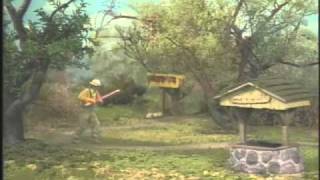 24
Quote O' Matic
Peter Shepherd: "This will not be an easy mission - monkeys slow the expedition."
Jumanji

19
stitch1993
No more Puppets? part 1/3
Remember when a lot show had puppets?
An unhandled error has occurred. Reload Dismiss