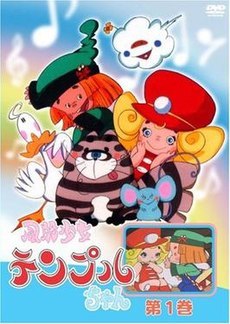 Fūsen Shōjo Tenpuru-chan, lit. Balloon Girl Temple) is an anime created by Tatsunoko Production.Temple is a lovely little girl who is more fond of music than anything else. She happens to board a balloon one day, and is excited by her journey until she is caught in a sudden storm and is blown away from her parents and home. She is in tears until she meets a drummer boy named Tam-Tam accompanied by animal friends who also play musical instruments. Joined by these new friends who play music to keep up her spirits, Temple sets out to find her way home and she finds love with the drummer boy. One of the final works credited to Tatsunoko Production co-founder Tatsuo Yoshida, who died in September 1977 shortly before the TV series premiered, it is widely believed that the curly-haired heroine of this series was named after Shirley Temple (indeed, Temple was renamed to Shirley in the French dub). The series was a success throughout Europe and Latin America in the 1980s under several differing titles, including Temple e Tam Tam (Italian), Shirley la petite fille en ballon (French), and Sabrina y sus amigos (Spanish). Harmony Gold attempted to produce an English dub to sell to the American market under at least two different titles - Sabrina's Journey and Tiffany's Traveling Band - but Temple the Balloonist has never been released in English. Characters Edit Temple Farmer (voiced by Kumiko Takizawa) is an adorable little girl who loves music and dance, wears a red majorette's outfit and loves to twirl her baton. While taking a balloon ride with Fuwatto, she is whisked far away from home by a sudden storm and tries to find her way home, accompanied by her traveling band. She comes from a wealthy family and is somewhat spoiled and indulged by her parents, but matures as her journey continues. Tomtom (voiced by Noriko Tsukase) is a drummer boy who was working for an abusive boss in a traveling musical troupe, but manages to escape with Temple's help. He becomes Temple's compan