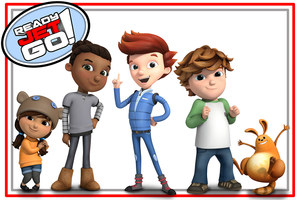 a preschool CGI animated television series produced by Wind Dancer Films. The series premiered on PBS Kids on February 15, 2016. It was created by animator Craig Bartlett,[1] and is produced in cooperation with NASA's Jet Propulsion Laboratory. The show is aimed at kids ages 3 to 8. On August 17, 2016, PBS Kids announced the renewal of the series for a second season, which premiered on April 2, 2018.Jet Propulsion and his family are from the fictional planet Bortron 7 which orbits around a red dwarf called Bortron. They live at Boxwood Terrace in Washington,[3][unreliable source?] where they study human customs and Earth environments for a travel guide. Jet has made friends with neighborhood kids, including Sydney, Mindy, and Sean, whose parents work at the nearby Deep Space Array. The Propulsions' car turns into a flying saucer, which they frequently use to take the older kids into space. Their alien identities are known to Sean, Mindy, and Sydney, but they otherwise make some effort to conceal their origin. As of early June 2016, it's unclear whether anyone else knows who they really are.[citation needed] At the end of each episode, scientist Amy Mainzer (also called Astronomer Amy) hosts educational interstitial segments: the segments are not included in the export version.