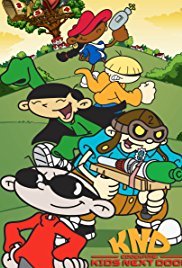 Codename: Kids Next Door, also known as Kids Next Door or by its acronym KND, is an American animated television series created by Tom Warburton and produced by Curious Pictures in Santa Monica, California. The series debuted on Cartoon Network on December 6, 2002 and aired its final episode on January 25, 2008. This show has been considered as one of Cartoon Network's most popular in its history. The series came about as the result of a viewer's poll by Cartoon Network.