The Groovie Goolies, created in 1970, was a take off of Filmation's wildly popular The Archie Show with a monster bend. Combined with another show featuring a character directly spun off of The Archie Show, Sabrina The Teenage Witch, the Goolies were a group of hip monsters, many of whom were, in look and sound, pop-culture echoes of the classic horror-film monsters created in the 1930s and 1940s, mostly by Universal Pictures including Frankie (Frankenstein's Monster), Wolfie (The Wolfman), Mummy, Drac (Dracula), Batzo and Ratzo (two mean green-skinned kids), Bonapart (an animated skeleton that might have been Napoleon Bonaparte), Dr. Jekyll-Hyde (bicephalous, a reference to Dr. Jekyll and Mr. Hyde), Hagatha (a witch), Bella La Ghostly (who looks very much like Drac and like Lily Munster), Broomhilda, and Hauntleroy. The show originally aired as Sabrina and the Groovy Goolies, and also featured Archie Comics character Sabrina the Teenage Witch with her aunts Hilda and Zelda. Sabrina had had previous appearances as a supporting character on The Archie Comedy Hour the previous year. In 1971, Sabrina was spun off into her own show. Adding music to the series, Filmation hoped that lightning would strike twice: the previous success of The Archie Show produced several musical hits. Like most animated comedies at the time, Groovie Goolies contained a laugh track. Never a critical success, the Goolies had legs, reappearing in 1972 as The Groovie Goolies on their own solo show, and again in 1978 as The Groovie Goolies and Friends. 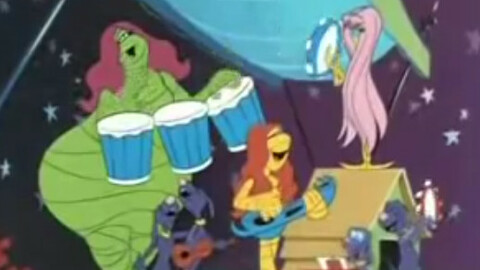