Birdemic: Shock and Terror (often shortened to Birdemic) is a 2008 independent romantic horror film written, directed, and produced by James Nguyen. The leading cast is made up of Alan Bagh and Whitney Moore. Inspired by Alfred Hitchcock's The Birds, Birdemic tells the story of a romance between the two main characters as their small town is attacked by birds. 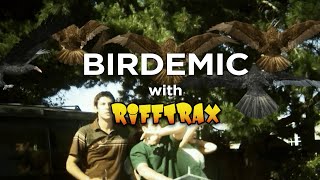 0
Quote O' Matic
Frogger: "That was a good idea fanny, don't get any more! -Frogger"
Frogger