Macross: Do You Remember Love?

Dimension Fortress Macross: Do You Remember Love? (è¶…æ™‚ç©ºè¦å¡žãƒžã‚¯ãƒ­ã‚¹ã€€æ„›ãƒ»ãŠã¼ãˆã¦ã„ã¾ã™ã‹, ChÅ JikÅ« YÅsai Makurosu: Ai Oboete Imasu ka?) is an anime movie based around the Macross television series. The movie is a condensed version of the events in the first Macross series, with new animation. The storyline of the movie does not fit directly into the Macross chronology, but within the Macross universe, it is a popular movie (ie. a movie within a television series). In Macross tradition, it features transforming mecha, pop music, and a love triangle. The movie gets its name from its romantic themes and also by the song sung during its climatic battle sequence by Lynn Minmay (voiced by Mari Iijima). The movie is perhaps best noted for its well-executed animation and character design and its pop soundtrack. The plot revolves around Hikaru Ichijyo (a hotshot pilot) and his love triangle with the coquettish pop-star Lynn Minmay and the fortress' first mate Misa Hayase. This story is framed by a war between humans and the alien Zentradi over possession of the space fortress Macross, which harbors tens of thousands of human civilians after the aliens bombarded Earth. However, it is revealed that the all-male Zentradi are fighting a war against their female counterparts: the Meltlandi; both genders, bred for war, are stricken by their contact with Protoculture (human culture), most particularly music. The release history in the United States has been spotty at best. Originally, two versions of a Toho-commissioned dub had been released in the United States throughout the late '80s and early '90s. The Toho dub (named in Japan "Superspace Fortress Macross") had been created for international sales, and used Hong Kong and Australian-based actors. The better known of the two US releases of the dub is a heavily-edited version that was released by Celebrity Home Entertainment's "Just For Kids" label in the late '80s, renamed Clash of the Bionoids. It has been heavily criticized by fans of the film for extreme cuts -- nearly thirty minutes were excised from the movie to make it acceptable for U.S. viewing -- to both plot and visuals (the ending, in particular, has been edited, with Hikaru calling the Macross after Boddole Zer's explosion cut out, giving some viewers the false impression he died in the blast. Many other concepts and why for's became confused due the heavy editing.) Later, a subtitled version was briefly released before, presumably, it was suppressed due to the ongoing legal battles between Big West, Tatsunoko Pro and Harmony Gold. Robert Woodhead, head of AnimEigo, has said publicly that he would like to release the film (AnimEigo released the first pressings of the Macross series in the US), but believes it will most likely never get a proper DVD release in the United States due to the legal wrangling. The movie was released in widescreen in both dubbed and subtitled format by Kiseki Films in the UK on video in the 1990s, but was notably one of their few catalogue titles not released on DVD. During one of the action scenes towards the end of the movie, Hikaru fires a barrage of missiles towards the enemy leader, Gorg Boddole Zer. As an inside joke among the animators, two of the missiles are drawn to look like cans of Budweiser and Tako Hai (a drink which literally translates as "Octopus Highball"). A video game by the same name was made based on this feature anime. A loose game sequel called The Super Dimension Fortress Macross: Scrambled Valkyrie was also made. Narumi Kakinouchi, one of the creators of Vampire Princess Miyu, was the assistant animation director for this movie. During a shot of Minmay and Hikaru running down the streets of Macross City during the "Teenage Dream" sequence, a bumper sticker for KMEL in San Francisco can be briefly and clearly seen as one of the holographic "billboards." While in San Francisco sometime just previous to the production of the movie, Shoji Kawamori had heard the FM radio station and became a fan. He had the animators place the sticker in the shot as an inside joke/tribute. During Minmay's concert, McDonald's Golden Arches are seen as is a Honda logo. Maximilian and Milia meet face to face during their battle in their natural sizes, in which Maximilian immediately falls in love with the giantess. He later undergoes enlargement in the sizing chamber so he can fight side-by-side with his lover, a reversal of the events in the TV series. Later aired on the sci-fi channel and showtime. 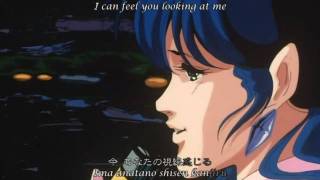