In the third sequel to the hit comedy Police Academy, Commandant Lassard (George Gaynes) decides that the police force is overworked and understaffed, and he comes up with the idea of recruiting civilian volunteers to work side-by-side with his officers. Of course, with the hapless Carey Mahoney (Steve Guttenberg) in charge of training the new Neighborhood Watch groups, one might reasonably expect things will not go smoothly; meanwhile, the duplicitous Capt. Harris (G.W. Bailey) sets his sights on Lassard's job, and he schemes to get his aging boss out of the way. Series regulars Bubba Smith, Michael Winslow, Bob Goldthwait, and Tim Kazurinsky are on board, as is Sharon Stone, who moved on to bigger and better things a few years later. 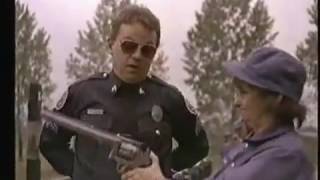 0
Quote O' Matic
Forrest Gump: "There was Dallas, from Phoenix; Cleveland - he was from Detroit; and Tex... well, I don't remember where Tex come from."
Forrest Gump