The movie "Jin-Roh" is about those in society who are predators among prey. But these "beasts" never bother to change their shape; like Red Riding Hood's wolf, they merely drape themselves with human clothes that do not even disguise the eyes, teeth and claws of a killer. Society rightly fears them. In "Jin-Roh," the Capital Police are themselves hunted -- marked for elimination as a force by their own government, and by a public eager to forget the past. 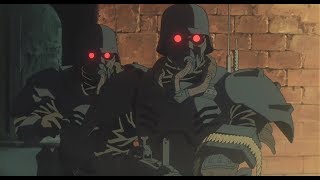