The Bourne Identity is a 2002 American-German action spy film adaptation of Robert Ludlum's novel of the same name. The film was directed by Doug Liman and adapted for the screen by Tony Gilroy and William Blake Herron. Although Robert Ludlum died in 2001, he is credited as the film's producer alongside Frank Marshall. Universal Pictures released the film to theatres in the United States on June 14, 2002, and it received a positive critical and public reaction. The movie is the story of a man shot by bullets and with no memory as he is rescued by a sailor. The man goes on a journey to regain his memory but has to deal with the ongoing onslaught of assassins.

This is a DVD trailer for the movie.
Posters 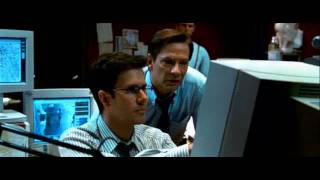 0
Quote O' Matic
Roxanne: "Why do these things always have to start with young, beautiful co-eds going into the basement?"
Added By: Clint_Olson
Evil Toons

30
JohnMatrix
Nes List of Lists
A summation of part of my NES obsession
An unhandled error has occurred. Reload Dismiss