America's most inept law enforcement team mixes business with pleasure as they head to sunny Florida in this comedy. The aging and often-confused head of the Police Academy, Commandant Lassard (George Gaynes), has reached mandatory retirement age, much to the pleasure of the devious Capt. Harris (G.W. Bailey), who is still scheming to take over his job. Lassard, Harris, and a handful of the Academy's "distinguished" graduates (including Bubba Smith, Michael Winslow, Leslie Easterbrook, and Marion Ramsey) travel to Miami Beach for a special ceremony to commemorate Lassard's years of service as he leaves the force; however, a luggage mix-up puts the clumsy cops in the middle of a massive illegal arms deal. Police Academy 5: Assignment Miami Beach was the first film in the long-running series that did not star Steve Guttenberg (Bob Goldthwait also left the franchise at this point), but most of the other regulars bravely soldiered on without him. 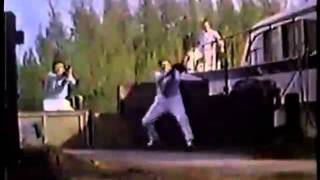