A review for the Gamecube platformer
By Benjanime
On
Before I begin I want to let everyone know that this is a paper that I wrote for my creative writing class during my freshman year of high school, though I've added some bells and whistles to it to make it more interesting than the original that I'd written, and it's only fair to upload this review since the game is already ten years old, so I hope you guys enjoy it!

Super Mario Sunshine Review, written as of April of 2003

The crew at Nintendo always know how to deal out a good set of cards when it comes to developing video games, and the Super Mario series has never been a slouch. Super Mario Sunshine is the recent Mario platform release for the Nintendo and it packs quite a punch.

The plot of this installment starts when Mario, Princess Peach and the Toads are on a flight to Isle Delfino, but they're given a disturbed welcome as the citizens accuse Mario of dirtying up the residence with a goop-like substance. Noticing the culprit, Mario sees a strange doppleganger of himself in a liquidized form. Taking the accusation, Mario is given the task of cleaning Delfino with a water spraying device called F.L.U.D.D. as well as retrieving Shine Sprites.

First I'll start with the graphics. The settings of the levels as well as the characters are fresh and vibrant, and are a sight to behold, and the graphical effects such as the spraying of water from F.L.U.D.D. and the water effects from lakes and rivers are a treat to look at. Everything is bright and colorful and feels right at home.

The soundtrack is comprised of music that fits evenly with the environments, like with the Delfino Plaza you get a paradise-sounding tune, to Gelato Beach, a tropical and comforting track. The sound effects are very appropriate for the target audience, as they're pulled off in a cartoon-like fashion, and they're a treat to listen to along with playing the game. There's even a bit of voice acting involved.
The gameplay to some, may get used to, but to start you have a couple of Mario's moves from Super Mario 64, such as the three timed jump, the side somersault, the wall kick, ground pound and the diving slide, though unfortunately the long jump is gone, but F.L.U.D.D. substitutes for that, which I'll talk about next. In total there are four uses for the water spraying device. The spray nozzle, which shoots water forward that lets you aim, the hover nozzle, which lets you make it across some long gaps during a jump, the rocket nozzle, which shoots you upward at a great distance, and the turbo nozzle, which shoots you forward and lets you run across water. You'll eventually run out of water in your tank, so you'll next to find an area that's filled with water to refill the tank, and all of the F.L.U.D.D. actions are used with the R trigger, while pressing the X button changes its function

As far as the control mechanics go, getting the Shine Sprites relies on the same mission based structure of Super Mario 64, and they go from easy peasy to challengingly difficult. There are some bosses that you'll meet along the way too, and they usually go from the same range of difficulty. 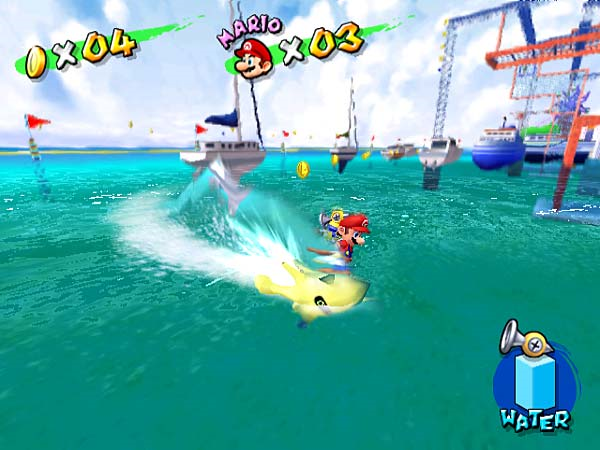 You'll also find a lot of well hidden blue coins in the levels, which getting ten at a time are requiring for paying to a citizen in Delfino Plaza to earn a Shine Sprite. Many mechanics of the levels range from platforming to minigames, which all offer their own unique challenge, and you never feel like you're getting too much of the same deal.

You can also fix the camera by moving it with the C-stick or fixing it with the L trigger. My only complaint is that the L trigger is also the same button as the ground pound, so it may take time to get used to as it did for me, as fixing the camera can only be done when you're on the ground, and also when you're in some tight spaces it can be a bit of a chore to fix the camera at how you want it to see exactly where you are.

Overall, this is still a great Mario platformer by heart. It has a couple of flaws, but to make up for it is the longevity that the game has to offer with the time that you'll put into getting the Shine Sprites and blue coins. Give this game a go if you're hungry for a challenging platformer. 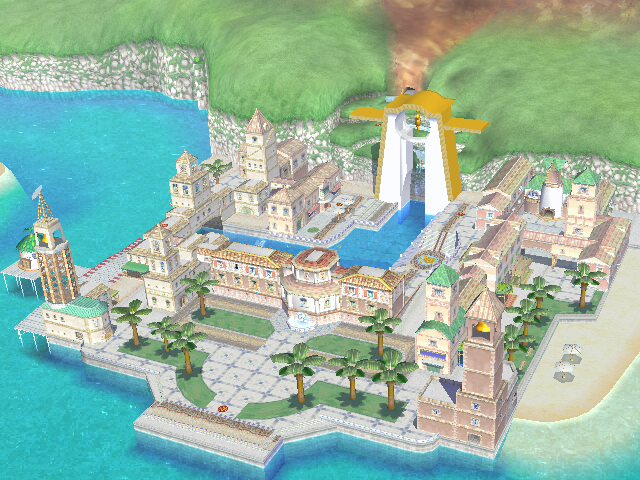 24
Quote O' Matic
Rick Riker: "[opening the front door] Uncle Albert! [Albert turns and shoots a nail from a nail gun; Rick catches the nail]"
Uncle Albert: "[amazed] How did you do that?"
Rick Riker: "It's... easier than it looks."
Uncle Albert: "[shoots Trey in the hand] Nope. I don't think so."
Added By: Clint_Olson
Superhero Movie 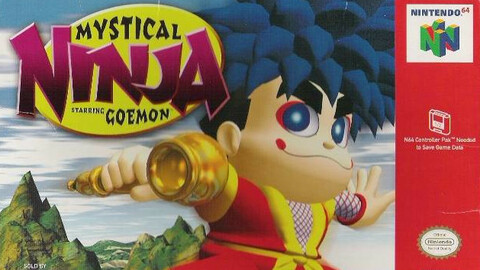 10
Bro
Hollywood, Blockbuster, and the N64 - Part 3
Did you rent any of these?
An unhandled error has occurred. Reload Dismiss