TF The Movie... Aka Star Wars

One of my biggest regrets about the transformers franchise is that it was a cartoon based on a toy range and not the other way around. It existed to sell, and compliment, an existing group of toys and it is this fact that stops it being a Teenage Mutant Ninja Turtles freight train or a Power Rangers phenomenon. It is comparable to the modern day Pokemon craze, a weak cartoon (Pokemon, not TF!) that has the action figure/merchandise in mind before a cartoon script has even been touched.


Looking back on TF the movie I find it hard not to taint it with this ‘toy commercial’ moniker. Yet I have on at least two occasions put this movie on at 1am, after coming in from a boozy night out. I think that part of me gladly enjoys regressing back to an undemanding 10 year old, a time of innocence and ripping the packaging excitedly off a new toy. What better place to share this, than with fellow ‘junkers’?

TF the movie has a lot going for it in the nostalgia stakes, so much so that even with my now-trained eyes, I barely notice the half cooked plot racing along at the speed of light in it’s cynical attempt to introduce as many new additions to the toyline as possible in it’s short running time. But despite these crass money making attempts to subvert the kids, there were some corkers weren’t there..? Huh? 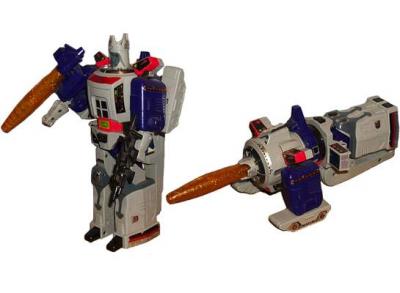 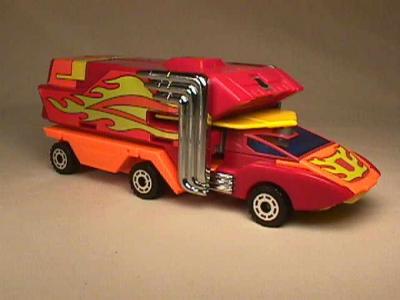 Come on!!!! Anyone?!?! Although with hindsight, the Galvatron toy does perhaps look a bit too much like a sex aid, the film introduced a great array of new characters: mostly celebrity voiced, only to be replaced by more mundane voice actors in the new series.

But, aside from the action figures, TF: the movie was an unusually brave affair. For me personally, it was the first film I ever saw in the cinema and I still remember the strange sensation of seeing these commercials for something epic, something that could only be watched at the cin-e-ma. Taken along by a reluctant father, I was taken aback by the dark and cavernous room and more than a little timid. But wait, what were all these trailer things?!! And then shortly after, wow, a gigantic mechanical planet eating another planet!!


Unicron makes his appearance in a dark opening scene, wiping out nearly a whole species just for his evening meal. Some of the shots of him scouring the planets surface have seemed to inspire Roland Emerich, for they certainly resurface in Independence Day years later.

The film moves on from this to the start proper, with large Star Wars-inspired rolling credits announcing who is bad and who is good. The ‘maniacal Megatron’ and the courageous ‘Optimus Prime’ are locked in a struggle the gravely voice over tells us.

However shortly into the film and it’s apparent that nothing is sacred in this new crusade to sell some new toys. Look below at robots known and loved… 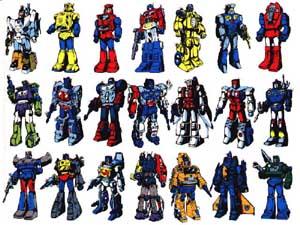 Some of these bad-boys are made short work of in the first ten minutes. A shuttle attack and climactic battle at Autobot City leaves at least Ironhide, Brawn and Red Alert dead and many other fan favourites, Optimus Prime, Megatron, Ramjet etc, dying. To me this seems to be a slightly crass attempt to follow the Star Wars thang again, it’s all very downbeat and reminiscent of the beginning of Empire – Megatron even produces a lil’ lightsaber-like weapon in his fight with Prime; complete with action-film dialogue.

“Why throw away your life so easily Prime?”
“That’s a question you should ask yourself Megatron…”

Oh and the autobots finally get their own equivalent of Soundwave, in the form of Blaster (Ghetto Blaster?). He has transforming tapes of his own you see and they make short work of Rumble, Frenzy Ravage, Laserbeak etc… 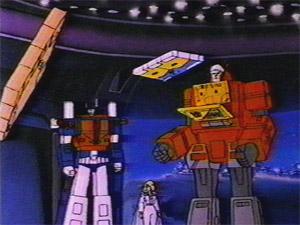 Finally the siege ends and the decepticons scarper in Astrotrain.
The autobot matrix of leadership is passed on to Magnus Prime, although the fact that Hot Rod touches it first (amidst a blue glow) pretty much gives it away that it’s already chosen who it likes. Prime dies and Megatron gets cast into space by that deceptive little arse-burger, Starscream.

SS: “Astrotrain has requested that we lighten our burden…..”
Survival of the fittest is suggested.
SS: “All in favour say aye.”
Aye’s all around.
SS :“And against…?”
A small dying group of decepticons in the corner groan and raise their hands
“n…n…naaaay….”
SS: “The Ayes have it!”

As Starscream carries Megatron to the door and proceeds to chuck him (“Oh how it pains me to do this….”), we get the best line of the film from Megatron…
“W-wait… I still function….”
SS: “Wanna bet…?” Throws him out….
“Staaaarscreeeeeeeeeeeeeeam!”
Found floating in space by Uncron, Megatron and the other dying decepticons are resurrected and bestowed new powers, as long as they can grab hold of the matrix; the one thing that, BAH BAH BAAAAAHH, can destroy Unicron.

All credit to the late Orson Welles and his last film appearance: his voice gives Unicron just the right sound of omnipotent menace and the scene where he rebuilds the decepticons (complete with shots of their skeletons as he scans them.) filled me with dread in the cinema. 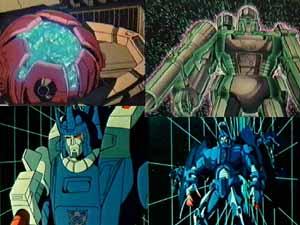 So there you go, Frank Welker voiced Megatron, to Spock voiced Galavatron all in under 10 seconds.

Ultramagnus is having a bad time of it and doing a bit of an underwhelming job at leading the Autobots out of trouble. He ends up with them severely ass-whipped and crash landing on the planet of Junk. No wonder he looks stressed. 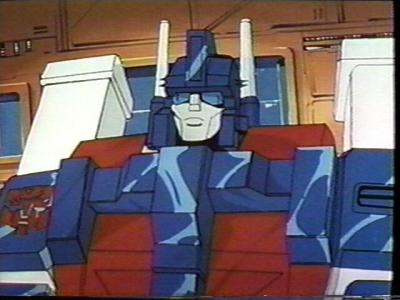 When on Junk, we are exposed to yet more savagery in the face of the sharkticons and even now I wonder if the idea of an evil revolving head sentencing people to death at the hand of these babies is a nice thing for a kid’s film. Worse, is the one remaining survivor from the ‘planet eating’ at the start of the film. The last of his race and he gets dumped in the pit… nice 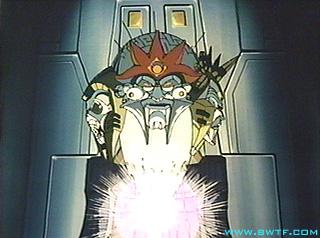 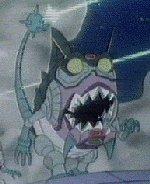 Luckily HotRod, Cup and the Dinobots are on hand to pummel them into submission, before running off to join their mates… they team up with the hitherto mischievous Junkbots and decide to go and bring down Unicron. Only trouble is, they’re having serious doubts about the matrix… see Ultra Magnus tried to defend himself from Galavatron with it and got blown to pieces for his trouble…. And to top it all, the giant gun touting bugger then went and took it for himself.

Unicron is none too plussed with Galvatron’s attempts to use the matrix on him (Seem’s Megatron has quite a lot of Starscream in him after all.) and as punishment says that he is going to eat Cybertron; at which point he turns into Robot form... and swallows Galavatron before proceeding to claws junks out of the Transformers’ homeworld. 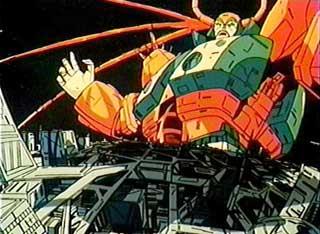 The autobots turn up at this point and are a little shocked… their response to this is to crash through one of Unicrons eyes and go exploring his insides… as you do. Whilst in there, Hot Rod is inevitably separated and stumbles across Galvatron. The bad guy proposes an unlikely truce and is quite happy to save Cybertron with Hot Rod, but Unicron has a hold on him (well, he did resurrect him) and would rather see Galvatron strangle Hot Rod. I wouldn’t have thought he had a windpipe personally, but there you go. Again, this whole part makes me think of Star Wars… “Yes my master...” “I must obey etc…” 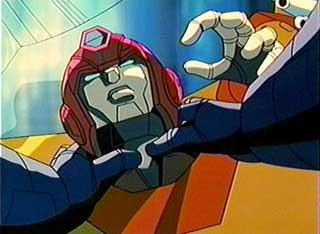 But hey, we know Hot Rod is special… he grabs the Matrix and shockingly, is able to open it. He transforms into Rodimus Prime (To Optimus’ voice telling him “Ariiiise Rodimus Prime…"– the SW references keep coming thick and fast…. Obi Wan – use the force anyone?!?!? )

Galvatron is cast into space by the newly big and strong Hot Rod and the power of the glowing blue orb aka the matrix proceeds to give Unicron a very bad case of indigestion.. 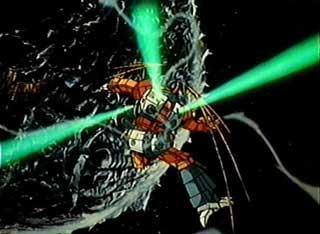 Considering I always put this film on to try and return to childhood, it’s bizarre that I always come out of it loaded with cynicism and thinking about sex…

20
Quote O' Matic
JiJi: "I'm going to put my paws together and pray that you're not serious"
Added By: System
Kiki's Delivery Service
An unhandled error has occurred. Reload Dismiss