The four best Ninja Turtle games ever
By LeoMikeRalphDon82
On
Looking at my screen name, you can tell I am a TMNT-fan. I am not a fan of the new series that came out in 2003 though. I am a fan of the original 1987-series, back when animation looked like animation. My Saturday mornings consisted of eating cereal and watching TMNT on CBS. Then I discovered that there were video games to the cartoons and this is what my article is about. 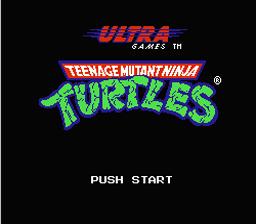 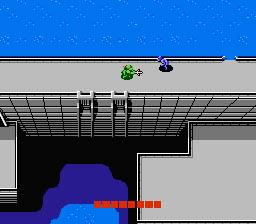 Teenage Mutant Ninja Turtles
This was the first game in the series for the NES. I came across it one day at my cousin's house. We started playing it, I wasn't to fond of the game though. The over-the-top view for the map and then going into the sewers to fight was not my style. The turtles looked all dark and the moves were just awful. It was also a lot harder than the other games that came out later on.
Each turtle served as a life in the game. Confused?!? That means that once a turtle was lost that counted like one life. So you got four lives total to start the game. The good thing was that you could switch turtles at any time, so you didn't have to rough it out with only one turtle per life. Any lost turtles could be rescued throughout the level. Each turtle was better than the other in one way. Take Donatello with his bo, he had better reach but slower speed. You also were able to pick up a secondary weapon for use like the ninja stars. 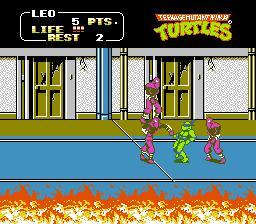 Teenage Mutant Ninja Turtles 2-The Arcade Game
Originally it was an arcade game. I first came across it when I was at a Blimpie's in Brooklyn, NY with my aunt. I asked for a quarter and went nuts on the game with Leonardo. The game was a straight forward beat 'em up style, think Final Fight. The NES port of the game had two extra levels and others were extended. One major difference was that the garage level boss was Baxter the fly instead of Rocksteady and Bebop. 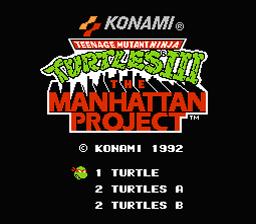 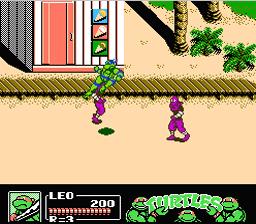 Teenage Mutant Ninja Turtles-The Manhattan Project
The last TMNT beat 'em up style game for the NES. Also, in my opinion, the best one. I was similar in game play like TMNT 2. The backstory is that while the turtles are on vacation in FL. Shredder invents a device that removes Manhattan Island from the ground. The turtles have to save April and Manhattan from Shredder.
I begged my pops to cough up the cash for this game when it first came out. I still remember the spot he bought it from. It was on 82nd Street in Jackson Heights, NY. I ripped the game box open and popped it into the NES. Spent hours playing it. With my cousin we made it to the last level before running out of lives and continues. With a neighbor from the building I made it to Shredder but once again lost out due to lives and continues. I remember having to pause the game and leave everything on to get a bite to eat and coming back and just continuing.
All the classic villains are in the game like Leatherhead, Rat King, Rocksteady, Bebop, Slash, and others. The different colored Foot Soldiers made an appearance as well. I still play this game on my NES Emulator on the PC. 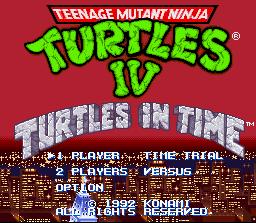 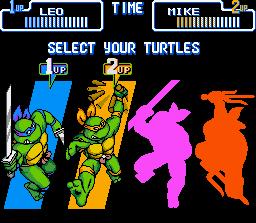 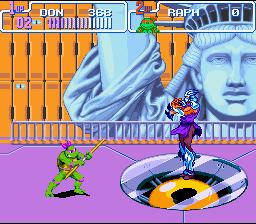 Teenage Mutant Ninja Turltes 4:Turtles in Time
This one came out for the SNES, also a port of the second TMNT arcade game. Similar to the arcade game in mechanics with a couple of extra levels and bosses for the SNES. The titles obviously explains what the turtles must do. You go from the past to the future fighting soldiers and bosses to rescue the Statue of Liberty from Shredder. In the SNES version you fight Super Shredder. This game had the ability to catch and throw soldiers which was necessary to defeat Shredder in his tank in the third level. I played this one at my boy's crib cuz he had the SNES. I had the Genesis, due to my sister crying that she didn't want the SNES but the Genesis. I did play Hyperstone Heist but it wasn't the same like Turtles in Time.

Other games came out for the Gameboy and a Street Fighter-type game came out for the NES and SNES. I didn't like them much. The new games for the PS2, X-Box, and Gamecube I have no interest in playing. If I were to try the games its just to unlock the port of the original games in Battle Nexus and Mutant Nightmare. Now that I have the Wii, I'm going to get the internet hooked up to it and download the classics from the Virtual Console. Ohhh man, I can't wait.

GIVE ME FEEDBACK, POSITIVE OR NEGATIVE, SO I CAN WRITE A BETTER ARTICLE NEXT TIME AROUND.

48
Quote O' Matic
Jack: "That's what everybody says, but with all due respect miss, I'm not the one hanging off the back of a ship here. -Jack"
Titanic