What happens when the wiley web-slinger takes a trip to the capital of Manitoba? Would you believe Electro getting beaned by a hockey puck? And drugs?
By icymatt
On 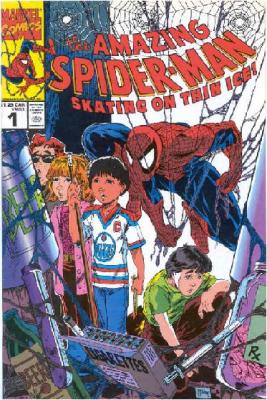 There have been many wacky anti-drug propaganda over the years, but that's really not important. What is important is that while comics, specifically Marvel, haven't forgotten Canada's existance (mostly thanks to out pals Len Wein and John Byrne), it seems that most of the superhero action in the Great White North takes place in the 'bigger' places, like Toronto and Montreal. The Prairies are apparently not important enough to be portrayed in comics. Well, until Marvel decided to team-up with Canada's Crime Stoppers (the police equivalent of 'Squeal on your neighbours for cash!' McCarthyism) to produce an anti-drug comic set in the capitol of Manitoba, Winnipeg! Yes, in a once-in-a-millionbajillionquadrillion event, your friendly neighborhood Spider-Man makes a stop in the mosquito-ridden, crime-filled Prairie city.
Oddly, this comic was written by Dwayne McDuffie, who would later go on to write for DC animated properties like 'Static Shock' and 'Justice League'.

We begin this story rather normally, with Spidey battling Electro in a Warehouse. The wall-crawler has the upper-hand in the beginning, until he Spider-senses a fairly generic-looking crook behind him, distracting him long enough for Electro to blast him into submission (take a note on this thug, he plays an important role later in our little drama, as obviouly hinted when he uses the thought bubble to say an cryptic message.)

When Spidey comes to, he notices the crime he smashed with his flying self is filled with hockey pucks, and an invoice that said they were to be shipped to Winnipeg. So, naturally, Spider-Man assumes that's where Electro is heading next. Going back to Peter Parker, he phones up ol' JJJ, asking for train tickets to the 'Peg, apparently to cover the big science fair. Jameson, convinced, sends Parker on his merry way.

In Winnipeg, Peter finds a community rink where the big science fair contender, a girl named Beth, is practicing with her teammates, a merry band that go by the moniker of 'The Aces'. There, he meets Herb, the coach (who is apparently based off a real person). We then learn of Alan, who is a real athlete. However, he's been slacking off as of late, for reasons....UNKNOWN! Peter then decides that the kids will enjoy a visit from Spider-Man. Cut to 'Winnipeg Mall' (which, believe it or not, doesn't really exist. They had the galls to send Spider-Man to Winnipeg, yet they don't even do the research on what any of the malls are called. Geniuses!), where...Gasp!...Alan is taking cigarettes and beer from some very shady punks, much to the dismay of his teamies.

Spider-Man clings to the walls and watches as one of the punks hands Alan one of the pucks he found in Electro's crate, and it's full of pills! DANGEROUS pills no less! It's time for a Spider-intervention!
Alan comes face-to-face with the wall-crawler, and agrees to come with him on a journey of self-discovery...er, I mean knowledge.

Spider-Man lectures Alan on how alchohol is the most prominent drug used by kids his age. Then we see the drug-pushing punk, Ben, from before, now looking as if he's getting older men to buy beer for him. Of course, there's more going on here, MUCH MORE! Spidey and Alan follow Ben all over the city, selling drugs all over the city, and then into an ominous warehouse (Spidey's past luck with ominous warehouses should give you a clue what comes next). Spider-Man follows him in, and finds more crates filled with pill-filled pucks. But, right on cue, Spidey-senses are-a tingling....

And look! It's our old buddy Electro! Apparently, he came to Winnipeg trying to avoid superheroes (what? The Alpha Flight don't count anymore?). While outside, Alan and his teammates are confronted by that generic thug from before with the punk kids, equipped with blades!
Spidey and Electro duke it out once again, but this time, interrupted by Generic Thug and his punk army threatening the kids! Generic Thug says he just wants Beth, for reasons....UNKNOWN! When Spidey shoots down that concept (and if he didn't, what kind of superhero would he be?), GT tosses Beth and has his punks throw a barrage of knives at Spider-Man, which he dodges with ease. Spidey proceeds to ensnare the punks, but where's Generic Thug?

Spidey looks outside, but there is only an old lady...or so he thinks! It is actually GT in disguise, and he is able to escape.
Now that Spider-Man's done with that..back to Electro! Now, here comes the scene that makes this whole mess worth it...

So, Electro's ready to jolt Spider-Man's system again, but instead of fighting back, Spidey tells Alan and Beth to take care of his nemisis. How you ask? With hockey pucks, because rubber is an insulator, thus rendering Electro's powers worthless. The kids shoot...and bean Electro in the noggin, knocking him for a loop. How Electro ever got over being beaten by a couple of kids from Winnipeg is a mystery for the ages. In the end, the crooks end up in prison, and the day is saved. Hurrah!

Afterwards, right on cue, the 'Aces' win the hockey game (what hockey game, and to what importance, is pretty much unexplained.)Alan has certainly learned his lesson. When offered drugs, he does Nancy Reagan proud and JUSTS SAYS NO. Meanwhile, Petey on the phone, telling JJJ that he's going to cover the science fair in Frederiction. Of course, this is to keep an eye out for Generic Thug, just incase he strikes again. It says 'To Be Continued', but I have never, ever seen or heard of this mysterious second part. Anyways, who cares? It takes place in Frederiction, the poor man's Winnipeg. Which is even sadder, considering that Winnipeg isn't the richest of cities.

There you go, Spidey's most bizarre adventure has been chronicled. Revel.
4
Login To Vote!

5
Quote O' Matic
Lady Amalthea: "I can feel this body dying all around me! -Lady Amalthea"
The Last Unicorn