A Trip Down Victory Road

One short sugar fueled afternoon in the eighties in a small California town.
By Coltyhuxx
On
A Trip Down Victory Road

Too few kids today will ever experience the joy of juggling a standup arcade session with the knowledge that twenty feet away a hot Straw Hat or Chuck E Cheese pie has just hit the table. Mom's polite reminders put undue pressure on you, and god damnit if you're not Cpl. Hicks trying to rescue Newt with the welding torch, "I know","I KNOW!"

Hmm, Straw Hat Pizza, on Mission Street in my still hometown of Santa Cruz, CA. Fond memories of that little 8x5' gamer den. I guess if I'm 6' now, and was 4' then... well then doesn't it, and I'm being math-y here, make it almost twice as big?

There is one day in my arcade loving youth that stands out in particular. It was smack dab in the middle of fifth grade, when my best friend Teja stole almost $50 worth of quarters from his mom (she was strange about things like this and, he believed, she kept boatloads of the silver coin in some huge fantasticall jug in her, very locked, room). Legend, lore, mythos? Well since this isn't a feature on juvenile criminal activity let me state simply that (a) he found it and (b) we stole it. All the while I stood watch in the hallway while he performed the duties of lead burglar. Some sweat and some rustling were soon followed by the largest cheshire grin this fifth grader had ever seen. The plan was on.

"Where should we go?"

We headed straight to 7-11 for some serious merch, paid for in politely stacked columns of stolen dimes and nickels. Though we less than an thirty minutes away from our criminal past we didn't see the need to make life any more difficult for our 7-11 cashier. Regarding this, I should add that we were sort of, what is referred to in the Dungeons and Dragons world, as a chaotic/good** caliber of person. Unscrupulous in some moral arenas – gladiators of virtue in others. "Whateva you want" was the offer Teja had made, and so my response to such temptation was a double fisting of a cherry Slurpee and a coke - Lord of the Beverages, wise and fair. And hey, they really are different beverages (for the record, as well as to prove my consistency I still roll deuce-style if I can ever get out to Wendy's, with the chocolate frosty and the Coke). You’ve been there - you're rollin’ deep as you finish the second "chute" of your Nerds. Check your magazine. Shake it. No rattle. Eyeball for any rogue corner pieces. Clean. Some Hot Tamales, some Skittles, some Toffifay (ritzy), a Violet Crumble (classy) and, why not, a Strawberry Charleston Chew (that isn't that good, but it's that big). Some food scientist really ratcheted back the flavor and quality throttles on that one. I'm pretty sure he was somehow involved with the launch of Mambas. Mambas, the most willingly shared candy in all of candy's history. “Would you like some of my Mambas?”, “Oh no, that's ok, I'm pretty deep in this here box of cherry-mint candy canes.”

That's a serious sugar rush for a ten year old. The buzz resides in weird places like inside of your eyes and behind your knees. So you cool it off with some peanut buttery goodness - like Reese's cups. By the time we got to the pizza place we couldn't even operate our combo bike locks because of the sugar-tremors. And a compulsion to run everywhere - like you "ain't walkin'" to the front door let alone the other side of your bike. And you certainly "ain't walkin'" to the change machine. Where's that standup of Track and Field, if you know what I'm sayin' - little flecks of plastic buttons would be flying everywhere. Fifty foot long jumps and six seconds 100 meter dashes if you harness the power lurking inside just right. 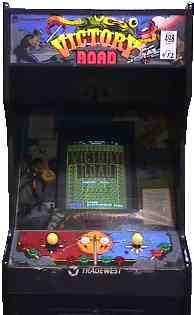 We weren't there for games of the yesteryear, however. We were there for one game alone: Victory Road, the sequel to the better known Ikari Warriors. When those spinner joysticks were introduced.. well it must have been like seeing Wizard of Oz jump to color in the 40's. I was seeing and playing in another dimension, one in which I could shoot independently of the direction of my avatar was running. Not to mention, some sweet voice synthesis challenging me to "come get him"? Shops, bosses , swords, red grenades of mass destruction , two player co-op, warps.... Check! Check! Check! CHECK!

VICTORY ROAD YOU ARE OWNING MY SOUL!!! 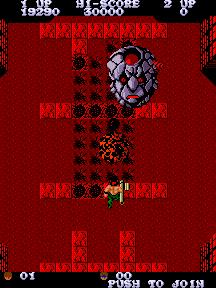 Teja must have had two, maybe three SOLID pounds of quarters in his sweatshirt pocket. It was stretching his that one behemoth pocket out very closely to knee level. We just kept slamming in quarters, one after another, finding deeper purchase into the darkest levels of this video contest than ever before. Formerly menacing bosses ($2-$3 quarter eating finesse-less bastards) were droppin’ little 8-bit bombs in their shorts. You just couldn't dent the supply of lives our coin provided, so actually…“You’ll never defeat me.” And sure, the gameplay was festively sloppy but it was pure fun. Successful hits from our avatars turn boss faces into wretched grimaces, indicating pain. Repetitive grimacing has a know causality relationship with “flashing red” syndrome – which many leading health experts believe to be the precursor to imminent boss monster death. But on this end, nothing but big smiles, and eyes fused to the screen. Fused and focused with more terrible intensity than a television would ever receive - what’s not for a parent to be worried about? And all through this maelstrom of video-adolescence tiny little three cent jolly rancher wrappers fell, flitting and spiraling toward the carpet below.

It was one of the first times I'd ever simultaneously experienced absolute and total unrestrained sugar binging and "free" arcade playing. Parents don't let you do this for, arguably, good reason and then when you're an adult and you can, you don't want to as badly. This is a bad system! You know, I might just have to grab a Charleston Chew and hit up the Boardwalk for a game of Tron tonight. Only now, I can pay my own way.

Carey Hillhouse, if you're out there I owe you and your jar twenty dollars. 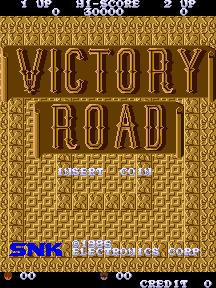 **Chaotic Good
Chaotic good characters are strong indivualists marked by a streak of kindness and benevolence. They believe in all the virtues of goodness and right, but they have little use for laws and regulations. They have no use for people who "try to push folk around and tell them what to do." Their actions are guided by their own moral compass which, although good, may not always be in perfect agreement with the rest of society.
6
Login To Vote! 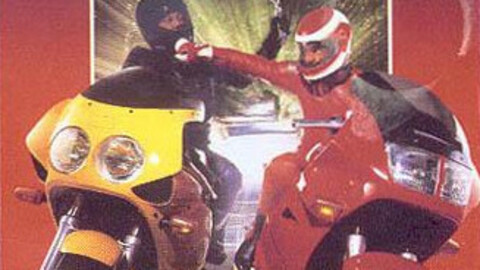