A look back at a Wes Craven movie.
By mysticwryter
On 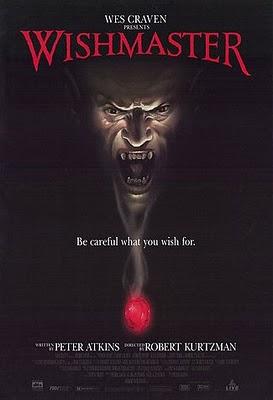 Ello! Yeah, The other day I watched Wishmaster, a film produced by Wes Craven, a horror depicting of a genie and his gruesome world he wishes to bring into modern day. I watched this movie over at a friend's apartment when I was 10. We sat there drinking mountain dew and having our Hot Stuff Pizza (courtesy of Ricker's Petro Station) trying to not freak out at some points of the movie (We were kids, some stuff really freaked us out.) As I watched it when I was older, I came to enjoy it. I really enjoyed this film for the history, the cast (some) and the gore and blood that is always rich in a Craven film. There were a few things that bugged me and some that which were pretty good for a "B" rated movie. I'll start with a summary then bring in the good and bad points.

We start with an opening scene in Persia around 1100 BC where chaos has insued with people dying horrible deaths and some changing into lizards, mummified masks and one where a man's skeleton has a mind of it's own. *Creepy*. A wizard stumbles across a Djinn, a demonic genie that was forged with fire, and a emperor who has awoken him. The wizard explains that "all this creature needs is 3 wishes to awaken his world." He then produces a fire opal and repeats three words "Nib Sugrath Baheme" and which the Djinn is then forced into the opal along with his chaos that he brought.
End Scene. 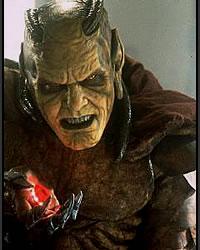 We are brought to modern day to see Raymond Beaumont, a male debutant and collector, watching the Ahora Mazda dangle above him as its being transported from ship to port. He states he's waited 10 years for this piece to be in his possession.

He spoke too soon.

The cables break holding the statue after the operator knocked over his drink, which was spiked with whiskey (yum) and plumets to the port, breaking upon impact with Beaumont's assistant underneath, killing him instantly. The other workers rush over cleaning up pieces of the statue when one discovers a red opal. He steals it and pawns it off.
The stone is brought to Regal Auctioneers where Nick, da boss, looks at the stone and wants to see its real value. He brings it to one of his appraizers Alex Amberson who takes a look at it. Upon recieving it she rubs it clean with her shirt, waking the djinn from within. The djinn escapes his retched prison and brings Alex a flash of his face. She tells Nick that there's something wrong with it and takes it to her friend Josh to analyze it in his lab.
Josh does a few tests on the stone, trying to find out what's wrong with it. Aw....stupid man. An explosion occurs and he's injured badly. We stumble upon an infant djinn who tells Josh he can take the pain away. Case in point, Josh dies in a pool of blood as the Djinn grows and vanishes.
Alex comes upon his dead body with the detectives there, having a breakdown/freakshow in the mix (ugh). She tracks down the worker who had the stone to Raymond. He tells her to visit a professor at the nearby college named Wendy. She visits Wendy and proceeds to tell Alex about the history of the stone and the Ahora Mazda.
Alex is still being plagued by visions of the Djinn's face, now covered by a mask of another dead man named Nathanial Demerest, and the victims he has claimed. The djinn tracks down Alex through her boss, obtaining her address. After getting through him... 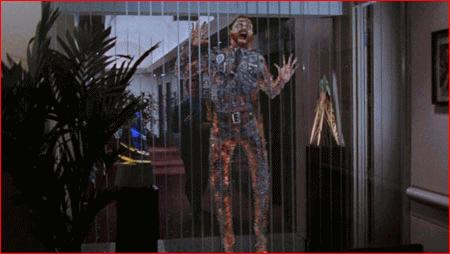 As Alex is still troubled by the visions, she goes back to Wendy to only find that Nathaniel/djinn has killed, removed the face, and portrays Wendy. Alex then grants her first wish; knowing her opponent (wish #1 granted). She then is in the world of the djinn, the fire red opal. After being terrified,she wishes to be taken to her apartment (wish #2 has been granted). Alex seeks out her younger sister Shannon whom the djinn has threatened to hurt/kill. Alex tracks her down at Beaumont's party for the proclaimed Ahura Mazda. Beaumont makes the huge mistake of wishing his party to be rememberable and then Nathaniel/djinn releases his chaos unto the party. 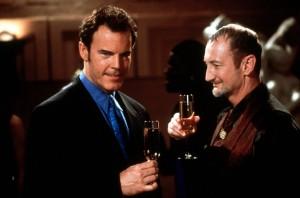 *Insert face of girl turning into glass "you can see right through me."* 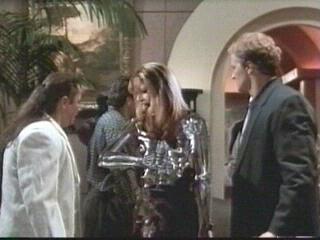 Alex comes face-to-face with the djinn who has already imprisoned Shannon in a painting with a burning house. The djinn tries to impose fear into Alex so she can make her 3rd wish. Finally, she wishes that the dockworker had not been drinking on the job 2 days previously, which would undo the coming of the djinn. The djinn is pulled back into the fire opal and we are back at the scene with Beaumont (like in the beginning) only this time the sculpture is lowered carefully and in once piece and Beaumont's assistant is alive and obnoxious as before.

As the movie fades we get a glimpse of the djinn sitting on his throne, waiting impatiently to be released again.

I'm weird when it comes to movies. I've seen a lot of "B" rated movies from The Mangler, Army of Darkness, to NOES. I loved this movie with the historical factors it presents with the folklore of the djinn. A djinn is a genie but is like the ruler of all genies in a chaotic realm, kinda like Shao Kann, Scorpion, Shang Tsung, Baraka all in one (sorry, I used MK for comparrison, lol). I love the cameos in the movie too (Tony "Candyman" Todd as the doorman, Robert "Freddy Krueger" Englund as Raymond, and Kane "Jason Vorhees" Hodder as the security guard at the jewelers). 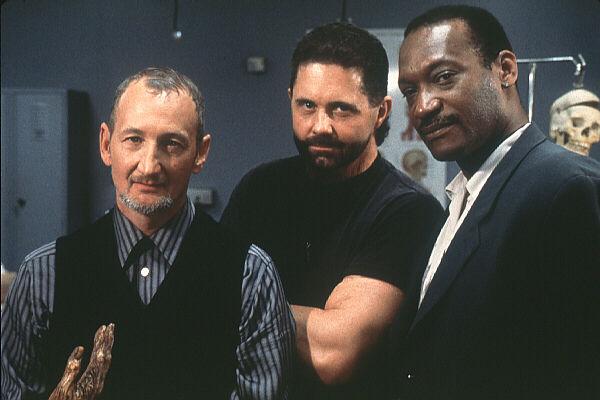 I Love these guys!!
Of course, I'm only naming a few and the only ones that did pop out for me but there are dozens that are in this movie!) They all had catchy phrases that lept them to their deaths but they were good anyway. I loved how Andrew Divoff personified the djinn, with the creepy voice (he used to eat jellybeans so he could get that voice to be so smooth and dark.) He was great as a villian and he had brilliant blue eyes (wowzers!).The killing scenes were creative and gory and shocking as I would imagine.

A few other things did kinda get me all "ugh" about the movie too. For once, the whole character of Alex. 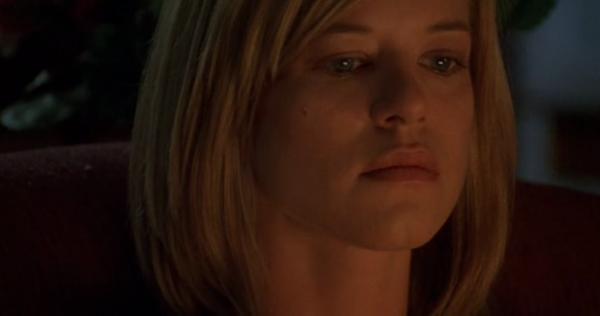 When she stumbles upon her dead friend Josh, she screams and fakes a brain anurism in the process. At one point it looks like her eyeballs are about to pop out of her head. Too much drama and too much expression for just a small bit to play is over doing it. Another scene where Alex sees more visions of the djinn's victims she falls onto the floor, crying wide eyed and screaming. At one point she looks like she's humping the air as her head bobbles back and forth on the carpet. It made me laugh rather than shudder in fear of what's to come. I know it's a "B" rated movie but come on, I've seen better acting from "C" rated actors. It just to me seems that the Alex character was pushed too hard rather than in Morganna's case (Wishmaster 2: evil never dies!) The dialect in some cases was plain, bare and just bland. The pharmacy where the hobo and the pharmacist have a few choice words. Eh, it was a scene but it was just not good enough.

All in all, it was still a good movie for the story, the effects, and some acting. I would give this movie a 3.5/5 given with the effects and history; 2 key ingredients in the rating.

I know there's a lot more to the movie but I don't want to carry this out for too long (as you can see, it's long anyway, lol). What are your thoughts? What was good? What was bad? Give me some ideas. I know I'm not alone.

*whew* Well, there goes one of my few articles I've written. Hopefully you will be hearing from me soon.

And remember:
"Fear one thing in all there is...fear the Djinn."
4
Login To Vote!
More Articles From mysticwryter

4
Quote O' Matic
Orb Creature: "Orb Creature: I have been trapped in that orb for eons, forced to do the biding of others. But now the warmth of your butt; has freed me. I shall fullfill my distiny, and bring about an era of perfect harmony to the universe. Jim: Check it out Peter! All -Orb Creature"
Earthworm Jim