A look at some of the lesser-known arcade games that deserved fame.
By the-micro-man
On
The 10 Greatest Arcade Games You've Never Played

You've probably been to an arcade and found the elusive GOOD GAME in this day and age. Or even back when 90% of arcade games were great. And they weren't too hard to spot. Classics like Donkey Kong, Mario Bros., Street Fighter, the Simpsons, Contra, Mortal Kombat, Ms. Pac-Man, Daytona USA, Frogger...

The list goes on and on. However, not all gems are so beloved and cherished. Many great games mysteriously go unnoticed, and end up dissappearing, remembered by hardly anyone, due to price, or lack of external attraction, or something like that. For instance, I've gathered up 10 great games you've may have never seen, and probably haven't played yet. At least, not in a real arcade cabinet. 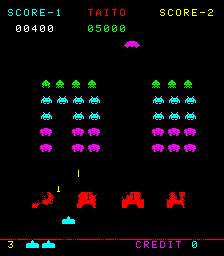 Did you know that Space Invaders actually had a sequel? Well, it did. This game is nearly identical to the original, except that it was now in full color and had animated sequences to top it all off. 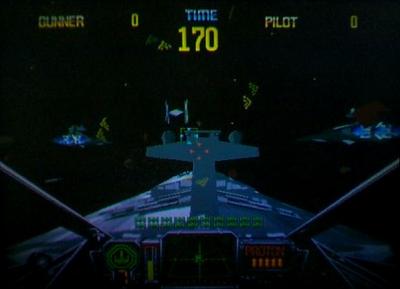 This game was only released in Japan, as far as I'm concerned, and it's quite rare. Many people view it as inbetween "Star Wars", which was released 10 years earlier, and "Star Wars Trilogy", which was released 5 years later. And it is, which curses it as being the ugly duckling of the saga. However, it's still fun if you can find an actual machine.

As far as I'm concerned, the plot is the same as the first Star Wars movie (Which is "A New Hope", for those who actually like new movies), and Darth Vader wants to blow up Alderan with the Death Star. You fly your X-Wing around outer space and fight through different stages of the game. First you have to fight tie fighters and defeat the Star Destroyers, then you fight the Super-Star-Destroyer, then you go onto the Death Star's surface, then the trench, and then, finally, the reactor.

It plays very confusing when emulated, but an actual arcade experience should make things better. If you can actually find it, please play. 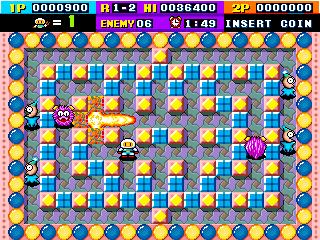 I'm surprised this game didn't become quite as popular as it should have. It's BOMBER MAN, for cryin' out loud! Well, there weren't too many BomberMan games out (only about 4) before this one, so it's a shame. Well, maybe another thing that hurt it is that for reason, around 1991 - 1992ish, Hudson was doing this weird thing where they suddenly started labeling a line of BomberMan games as "Atomic Punk". Now, I don't know about you, but "Punk" isn't exactly the first thing that comes to mind when I play a BomberMan game. The MUSIC isn't even punkish. It's a freakin' cutey-anime game when you actually play it!

Anyways, your Bomber-Buddy, King-Bomber, turns evil and starts trying take over the world with evil robots. So, you travel through 6 different worlds, such as carnival, egyptian, sewer, jungle, etc. -themed stages. You blow up enemies such as killer pom-poms, evil bearded knights, vaugely phallic/bowling-pin looking creatures (no, seriously, they look like penises), evil green one-eyed BomberMen (which were exclusive to the American version), and little red demons that can disguise themselves as blocks.

Also, a BomberMan game isn't complete without a battle-mode, so they did that, with a four-player battle game set in an old-fashioned japanese town.

The game's only flaws are its lack of wide distribution and limited soundtrack (only 5 in-game tunes), but I strongly advise that you play it on MAME, or if you're a law-freak, go on desparate measures to find an actual machine to play with. 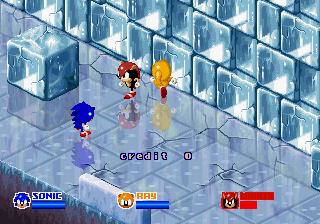 Yes, there WAS a Sonic the Hedgehog game released in arcades. Albeit, it's extremely rare in America. It features a fitting trackball-based interface, and a cool isometric style that slightly resembles Sonic 3D Blast. It also features two obscure sonic characters, Mighty the Armadillo, and Ray the Flying Squirrel. In fact, this was the only appearance of Ray anywhere.

The game's story is that Sonic and his two pals were being chased by Dr. Robotnik's giant tank, and they get caught, and are taken away to Dr. Robotnik's secret island, which is laden with traps. They have to escape, and try to put an end to him once and for all. The game, though challenging and laden with traps, actually contains very few regular enemies, which is a weird thing for a Sonic game. The only ones I really saw were jumping robotic snakes and a beetle robot in the desert stage, and robotic worms in the water stage.

Anyways, the game is quite difficult, but it's still fun to try, especially if you've got friends with you and enough coins. However, losing the final stage in the self-destruct sequence (which will end the game for you permanently) is enough to discourage a player from playing again. 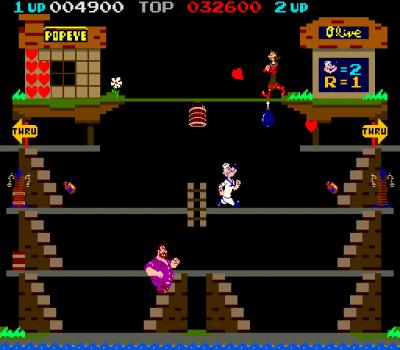 Whenever someone talks about classic Nintendo games (And I'm talking BEFORE the NES), you'll probably expect to hear about Donkey Kong, Mario Bros., Punch-Out!, or something like that. However, one gem still goes unnoticed: Popeye. Basically, the storyline is that Olive Oyl is being held captive by Bluto, and Popeye has to catch Oyl's hearts she throws to him for some reason. If you let one fall into the water, you lose a life.
I personally never beat the first stage, but the gameplay is appealing enough to make me keep coming back. The sprites were pretty high-res for their time, I might add. And who can resist when SPINACH is an invincibility powerup? Anyways, it's a great game based on a great cartoon made by a great company. 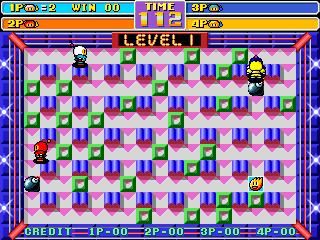 This game was also known as "BomberMan World" in some regions. Anyways, this game is the sequel to the first Atomic Punk arcade game. It features a slightly bulkier-looking BomberMan fighting KingBomber (who took over the United Nations Building) once again, but this time, he has to travel all across the world, fighting bad guys in real-life locations.

In the game, BomberMan travels through Japan, Egypt, Chile, Greenland, India, and the United States, as different stages, with backgrounds and enemies to match the terrain of the country. He can fight a vast array of wacky enemies, such as ninjas, chickens, crabs, ghosts, giant lips that eat bombs, dragons, and psychotic clownlike pests.

Once again, the game has a battle mode, which now has more variety. Each stage has a different color scheme, and the enemy A.I. for computers increases as the players progress. 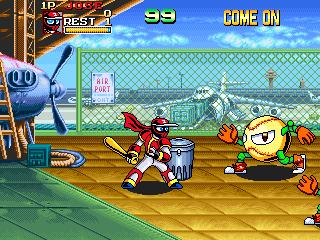 This game is a gem. It's a repetitive beat-'em-up (which IS a good thing), but the concept is more than half its appeal. I always joke with my friends that this game is like blending Teenage Mutant Ninja Turtles, Mighty Morphin' Power Rangers, and Professional Baseball on television together and making it into a video game. The game stars four baseball-playing ninjas, Jose, Ryno, Roger, and Straw. They go on a quest to recover five golden baseball relics which have been stolen from the Sports Hall of Fame.

In the game, you will fight evil baseballs, evil baseball-bats, evil tubas, evil dogs, and evil versions of nearly every other houshold object. You will throw home base plates like shurikens, drive cars and run your opponents over, and travel across the United States. One of my favorite bosses is the "Ghost Bull" boss in the Texas stage, which is a gigantic poltergeist bull composed of various items in the haunted house.

It's a really cool and fun game, so I advise you try to play this one, too. 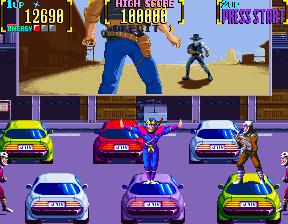 Another great ninja-themed game. This one is a sidescroller released by the great Konami. Basically, the world is on a verge of a nuclear holocaust, and an evil corporation named "Skull Enterprises" is mostly to blame. It gets real when a serious ninja hired by Skull kidnaps one of your fellow ninjas, and you have to rescue him and then destroy Skull Enterprises.

Everything about this game is wonderful. The music is extremely great, the graphics are beautiful, the game is quite lengthy and rich, and it contains many plot twists for an arcade game. Almost every stage is something new and exciting. You can also see a "movie trailer" for "Sunset Riders", a game released earlier on which this game is based, engine-wise.

Please play this game. It's one of the most epic and beautiful games I've ever seen. 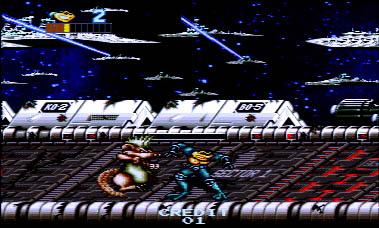 Most people haven't played this game, but it's pretty much everything great about the original BattleToads x4. What can I say? Blood and gore, actual voices, great music, great graphics, and wide variety in gameplay. Some stages are beat-em-up-style levels, others are raw sidescrolling stages, and some are automatically-scrolling shooter stages.

One of the best things about this game is its use of subtle details. There are little christmas trees in the second level, and as you get further through the cave, each sign you pass says something different. In the next stage, some of the rats are shown straining on a toilet seat before preparing to battle you. The bonus stage has the rat inside staring in shock as you blast his starfighter apart, and the fifth level has portraits of all bosses in the game. 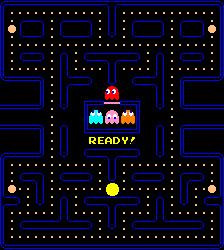 YES. THE ORIGINAL PAC-MAN. I DARED TO SAY IT. AND I DID. "Why is he putting the original Pac-Man on a list of rare games?", you may ask. Because everywhere you look, it's impossible to find an actual original Pac-Man arcade machine. Seriously-- you'll see those Ms. Pac-Man/Galaga Combo machines EVERYWHERE, but no Pac-Man! It's just sort of a paradox that a game's sequel is more easy to find than a version that's actually more popular. Still, "Ms. Pac-Man" is a fun game.

As for how great this game is? It's the most famous video game in the world, and it deserves every bit of it. The graphics were revolutionary for their time, the gameplay was actually original and broke off from the sports games and space games of the late 1970s. It actually got girls into playing video games, helping thousands of nerds everywhere. A game based on a pizza with a slice missing changed the world. You've been living in a cave if you've never played this.

Well, that sums this article up. I planned to make it longer, but I could only find 10 games this good. As my assignment, comment me and tell me if you've actually spotted one of these at your local arcade. I can name BattleToads, but that's about it. Thanks for reading my first article... Until then!
32
Login To Vote!
More Articles From the-micro-man 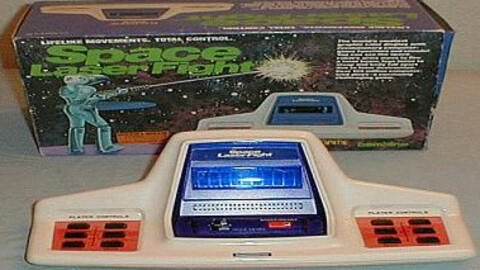