A void in my life that will never be filled.
By jnet0201
On
Growing up in Houston, I have had several opportunities to visit some great venues. I have been to both, the Astrodome for an Oilers and Astros game, as well as Reliant and Minute Maid Park to watch the Texans and Astros. I watched Rockets playoff games at the Summit and Compact Center and I have seen games at the Toyota center. I have been blessed to visit several others venues for various concerts and events.
However, there is one void in my life that will never be able to be filled. In October 2005, Six Flags Astroworld, which played host to so many great memories, finally closed its doors to the public. 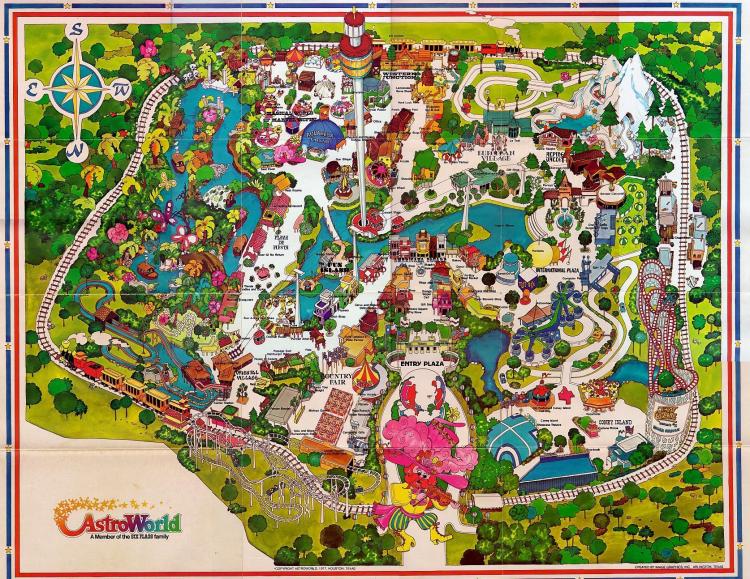 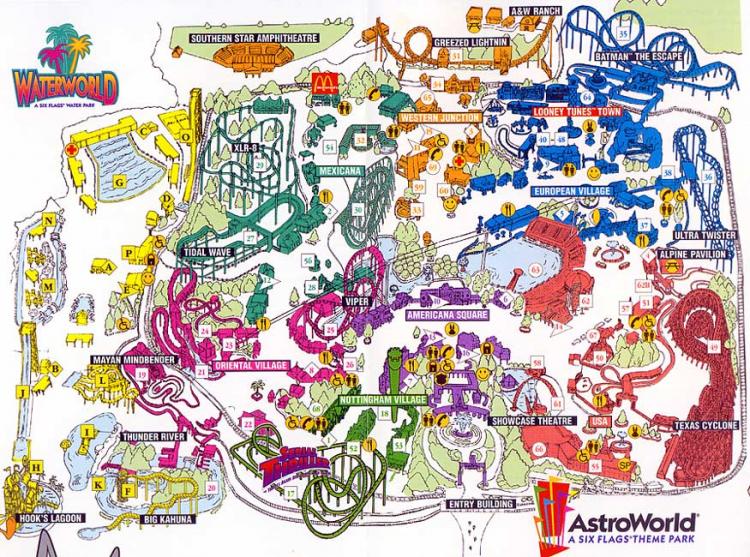 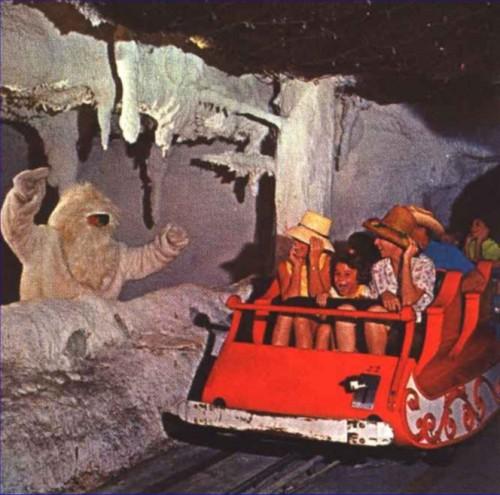 I vaguely remember riding this ride when I was 6 years old. Not for the fact that it has been a long time, but for the fact that I hated the dark. This simple roller coaster a was a dark tunnel ride through a mountain. Now I only remember a few clips in my memory because my eyes were shut almost the whole time we were in the tunnels. How ever I do remember the tunnels being very cold. I remember opening my eyes to see some miners with some pick axes along the side of the tracks. Then there was that damn abominable snowman at the end. Just when I thought that ride was over and I literally saw the light at the end of the tunnel, BOOM! Yeti! The sorry S.O.B. jumped out from the rock and scared the crap out of me. I had just seen The Empire Strikes Back a few weeks before and I was certain I was going to be hung from the ceiling. By the time I got the nerve to ride Alpine again, it was taken down. 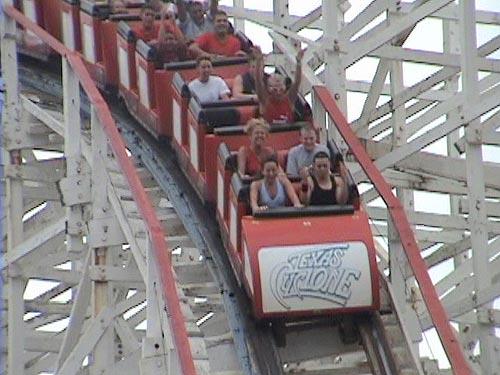 I can say three simple words about this roller coaster and everyone in Houston will know what I am talking about. Ready? Wait for itâ€¦The Back Car! Bam!!! Did I just push you into memory free fall or what? Okay, for those that don't understand let me explain. Before The Giant at Six Flag or the Rattler at Fiesta Texas, this roller coaster had one of the best first drops in roller coaster history and it was fast. Since it was a wooden roller coaster, the cars sat on top of a track. So when the coaster went down the hill and around that first sharp turn, you could feel that car bounce a little and come up off the track a few times. This added a whole element of fear and integrated an urban legend that someone died from the back car falling off the track.
I rode this coaster for many years as it continued to be a staple attraction for my visit.
Water Rides
The oriental village was home to a few rides, such as The Serpent, but my favorite was the Bamboo shoot. Bamboo shoot was a river log ride that was a great way to cool off on a hot summer day. It had a small drop and splashed a little bit, but it was in the shade and you got wet. 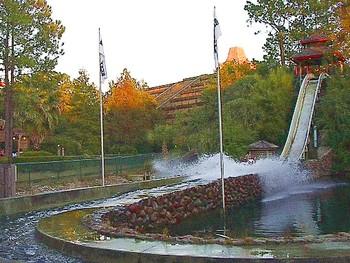 Then in the early 80's, Thunder River came along and It became the new cool down ride. Thunder River was an 8 person river rapid ride that had its passengers spinning and bouncing off rocks and mini falls. It was a blast and for the better part of a decade dominated as king of the water rides. It was finally dethroned by the Tidal Wave which was not a great ride, but created a huge wave that came crashing over the exit bridge. Then you walked around the rest of the day in wet shoes. 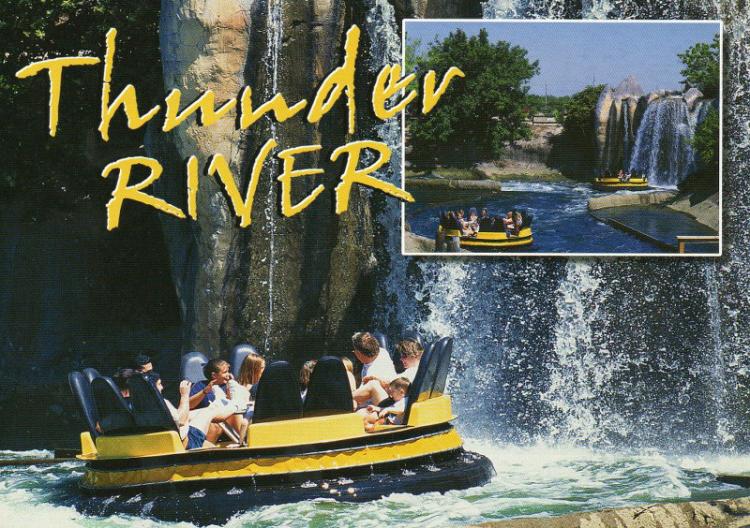 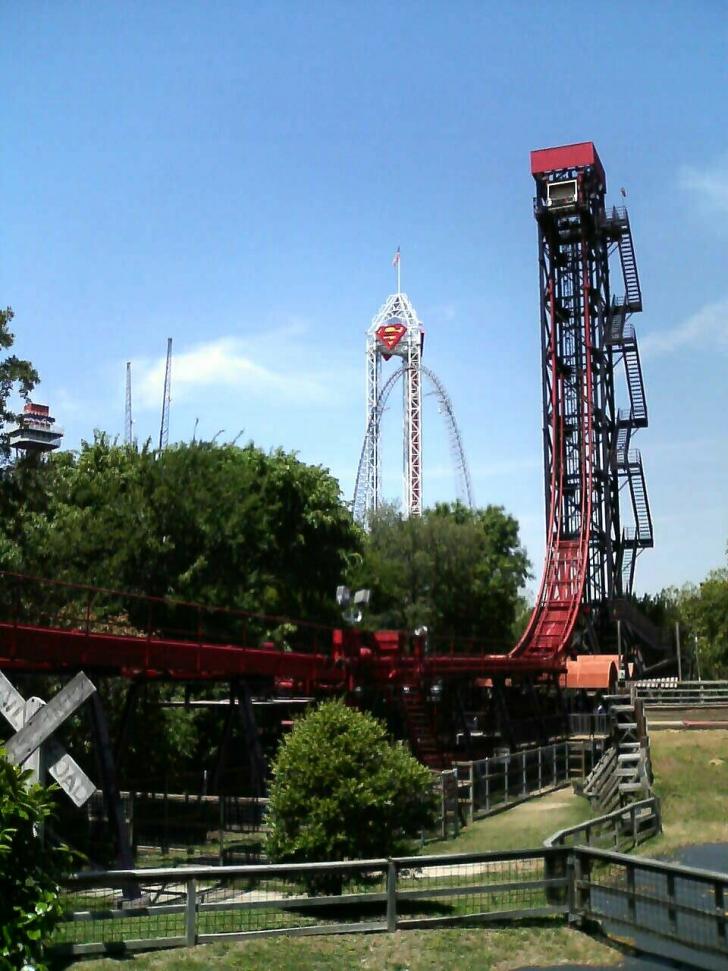 So the Sky Screamer was one of my two favorite rides. I am someone how is not really impressed with turns and loops . I am more excited about pull and G-Force. That is why I LOVED this ride. This was a 12 story elevator type drop coaster. You start out in a cage that seats four. It lifts you up 12 stories as you wait in anticipation. You look down through the catwalk floor as the cage slowly moves forward to the drop zone. You place a penny on your leg. You know you will lose it but who cares, it's a penny. You just want to see it lift off your knee during the fall. Then the warning sirens go off. Two sirens wale but mid way through the second you feel the floor drop out from underneath you as the cage plummets to the Earth. Right at the end of the fall the cage adjust 90 degrees as it begins to slow. You are now on your back and trying to breathe, laugh, scream, and relive the four second free fall. I loved that rush. 30 minutes before the park closed, when everyone was standing in line at the bigger Coasters, you could run through the line of the Sky Screamer 5 or six times before the park closed. 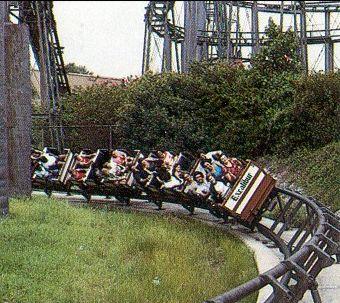 This was the first roller coaster in Astroworld. It was in Nottingham village right past the carnival games. Since it was older, it was a smaller but fun. A couple of turns felt like the car was gonna tip. That combined with being so old gave it a feeling of impending death. 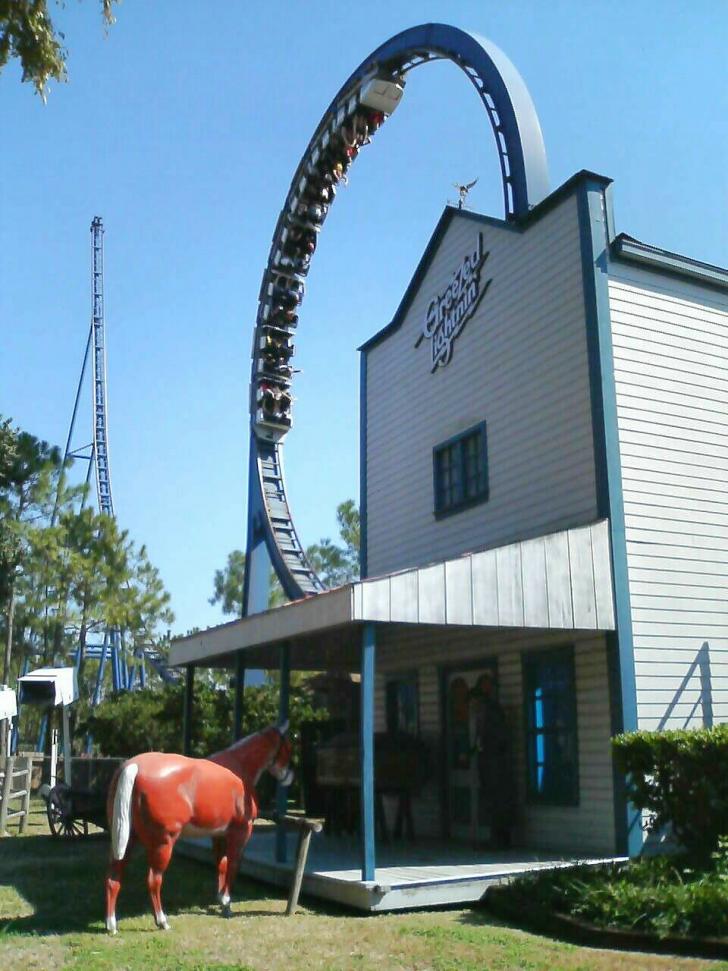 This was the second of my two favorite rides. It was a looping coaster, however the take off was the best part. It was setup a lot like the slingshot on an aircraft carrier. I have heard by some accounts that it took off at 4Gs while others say 6. I am not sure. I do know that it was fast enough to pull your cheeks back (and tighten up you lower cheeks). Going through the loop forward was fine, However backwards through it that I liked. You lost some momentum on your return so it was a little slower. That meant as you went through the loop, gravity pulled you down a little bit. Every time I rode this ride, I had the theme music to top gun playing on the boom box in my head. "Jester's Dead, YEE HAW!!!!"

Shows
So there were a lot of gun shows and there were a lot of stunt shows. When Warner bros bought six flags they all change to DC Superhero theme. I am not going to dwell on these. What I will talk about is the greatest show of the 80's and 90's, Videocity.
This was a dance club for teens back when videos were in its hay day. You could go, listen to your favorite Duran Duran song and spin until your heart was content. On Saturday nights, right after the 10 o'clock news, Channel 39 Gold would host air a dance program from Videocity, giving this city its own little American bandstand knockoff. Nothing like sporting your Vision and Bugle boy with a little bit of Mousse in your fro. Then, immediately afterwards, Paul Boesch Wrestling. 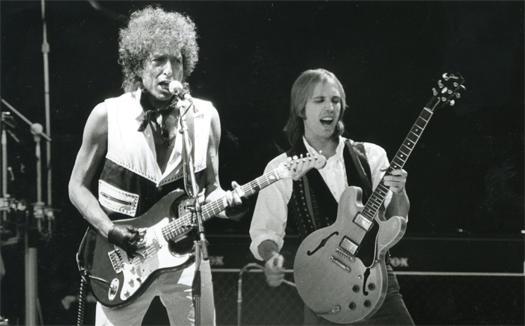 I was not at this concert, but I wish I was!

This was an AWESOME outdoor theater where several artists came to perform. My first concert treated me to Information society and Depeche Mode. However my favorite band to see there will always be The Beach Boys. At that time they were without Brian Wilson, but had a smoother groove sound. Man, they had some great slow dancing sons at that time. Those girls would rub up against you and â€¦well you know what happens to a 16 yr old boy with procreation on his mind.
So here is where I will end part one of my reflection. To tell the truth, the thought of being 16yrs old and slow dancing flustered me. Now I have to regroup and gather my thoughts. Therefore, look for part 2 to be posted really soon.
18
Login To Vote!
More Articles From jnet0201 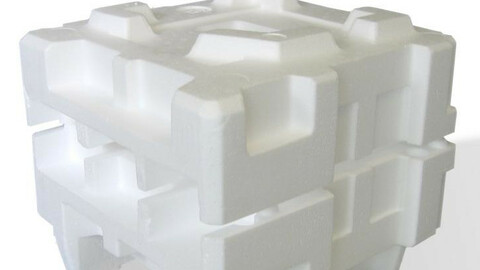 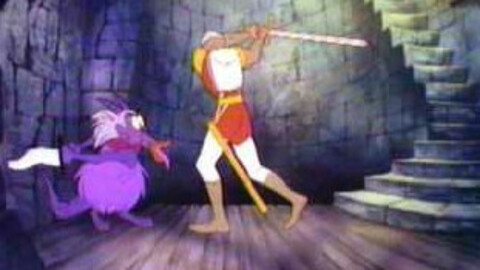