Memories of the 1963 Turbine car.
By eddstarr88
On 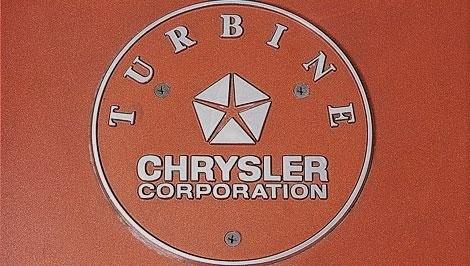 One of the great moments in the history of the automobile has to be the development of the Chrysler Turbine engine. This story goes back to a time when design concepts were prototyped and physically tested. For years Chrysler spent both time and money on an alternative to the piston engine. By 1963 Chrysler was ready with its boldest move yet. The Turbine car was not just a "concept car". It was a limited production car ready for real drivers to experience. Here's my take on the first and only jet car to take up residence in neighborhoods, just like yours, all around the nation. 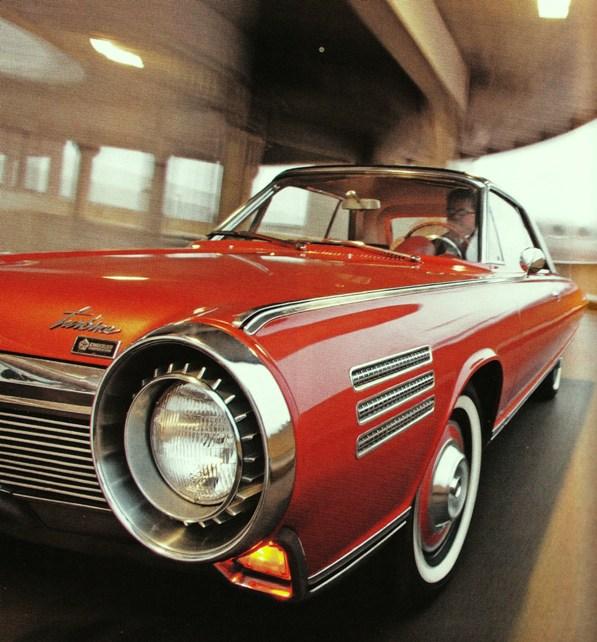 In the aftermath of WWII the power and efficiency of the jet engine quickly put the world on notice that the era of piston-engine aircraft was over. Developments in aviation begged the obvious question, "Why not jet power for automobiles"? Well who better to answer that question than Chrysler Corporation? After all Chrysler did win a contract to develop aircraft engines for the U.S. Navy during the late 1940's.

Chrysler Corporation's design work resulted in lightweight yet powerful turboprop engines that seemed uniquely suited for adaptation to automotive use. You have to admit it's an interesting question: "What if you took a jet engine's turbine power but, instead of producing thrust, you use that power to turn a second turbine that's connected to drive wheels"? The result would be a Jet Car for the Jet-Age! 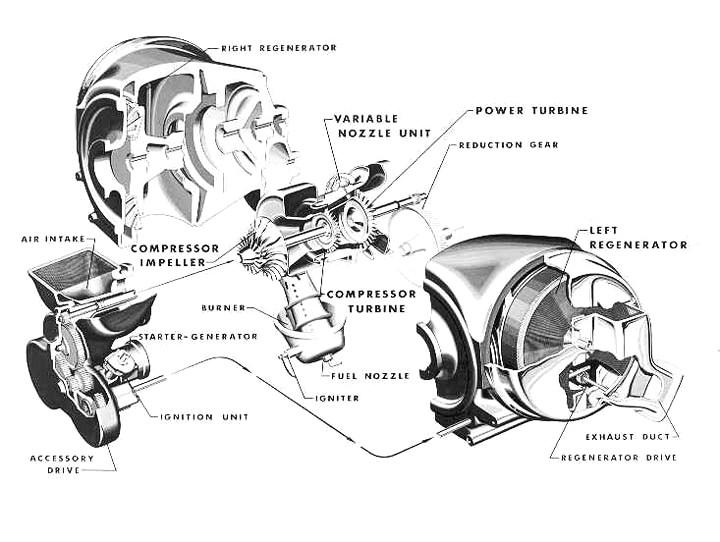 A turbine engine works by pulling air through an intake and compressing it. The compressed air is mixed with fuel and ignited. The explosive expansion power of combustion is forced through the blades of a turbine. The turbine spins under this power, and can be used to propel the drive wheels of a car. 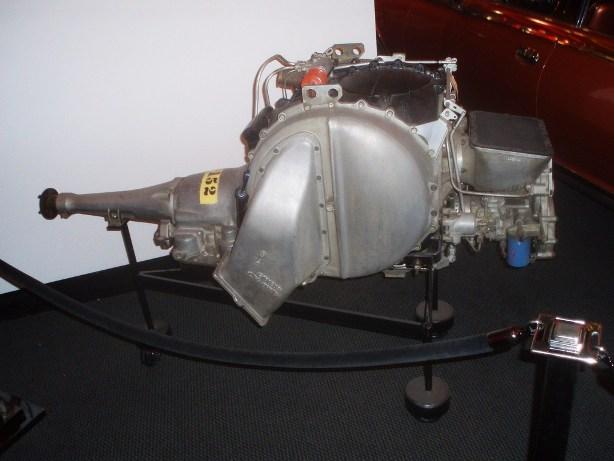 After experiments with several prototypes, Chrysler's "Generation IV" turbine engine fit the design requirements the corporation specified for real world testing and production feasibility. Chrysler had its jet engine ready for consumer testing. Now it was time to design a car impressive enough to showcase this remarkable powerplant. 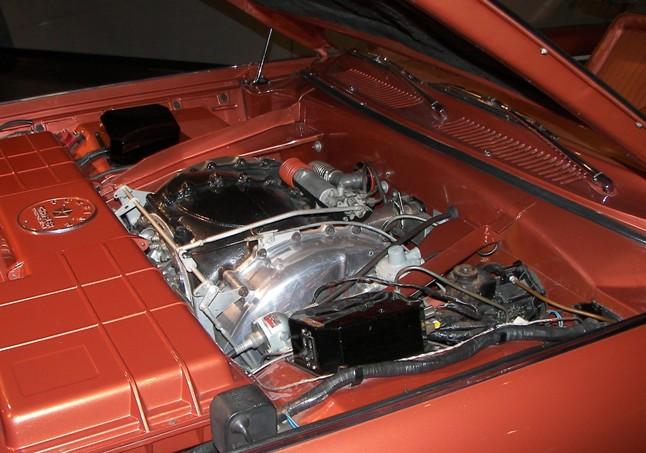 And the result of all that design work is what you see here.

This is the Chrysler Turbine car of 1963. 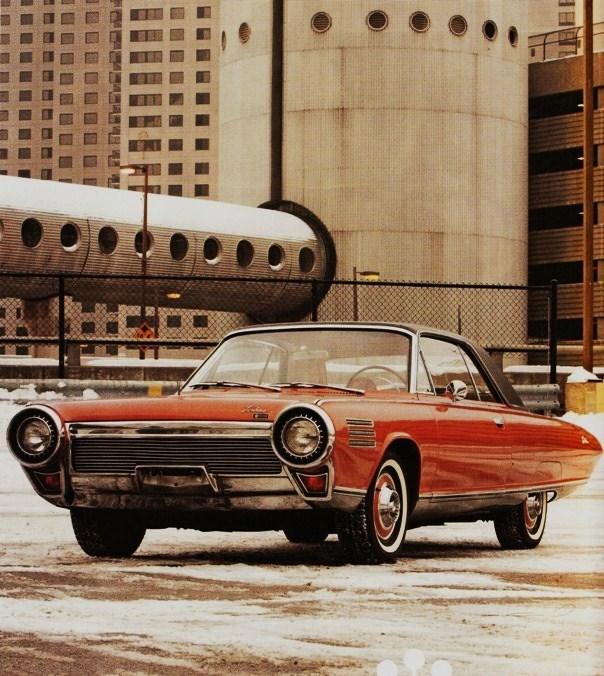 Here, finally, was the Chrysler "Thunderbird" the corporation always lusted after. Designed by Chrysler and built in Italy by Ghia, the Turbine car's body was a mix of familiar and unique design elements. Distinctive "thrusting" headlamps frame a simple, elegant grille. Flat hood with straight, declining height fenderline trailing to a compact rear-end with impressive tail lamps inside a simple looped bumper. The cars sides were unadorned. Nothing to mare the elegant lines, except the three vent-like side grilles just after the headlamps, before the front wheel openings. Notice the stainless steel fenderline upper molding running in an unbroken line from front fender to rear bumper. And the beautiful rocker panel moldings running along the lower bodysides, fender skirts and rear splash panel in an unbroken line except for the front wheel openings. The paint color was stunningly beautiful, Firefrost Metallic later renamed Turbine Bronze. The paint seemed to glow as if lit from within. Inside, a plush, four bucket-seat interior in Metallic Copper-Orange leather was a sight to behold. A brushed-metal center console ran full-length, front to rear, between the seats highlighted with "turbine" style vanes to emphasize the obvious. Top it all off with a limousine black vinyl roof with stainless steel trim and you have one of the most outstanding automobiles of the 1960's. Chrysler's chance to show-off and did they ever! 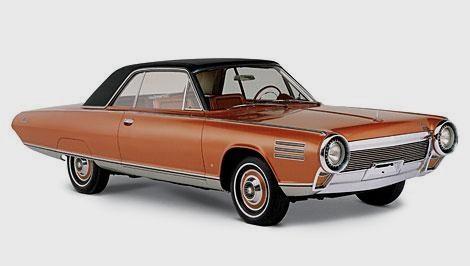 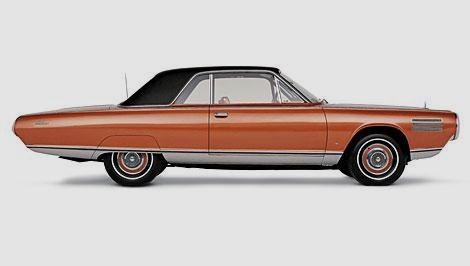 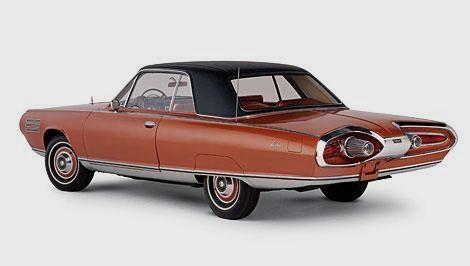 This was the car Chrysler would use in the most comprehensive consumer testing program in its history.

The goal: to produce a mid-size, 2-door hardtop car of approximately 4,000 lbs., yet fully equipped with every Chrysler accessory except air-conditioning. The plan: to build 50 of these limited-production cars, all identically equipped, and put these cars into the hands of ordinary Americans for real world experience with a jet-powered car. Laboratory testing only gets you so far; Chrysler wanted hands on data to determine if its turbine engines were ready for prime time. 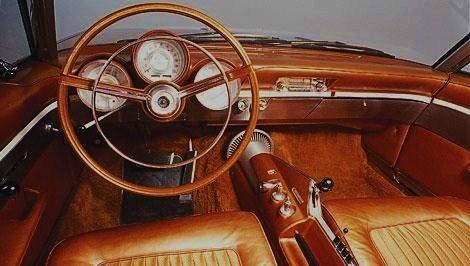 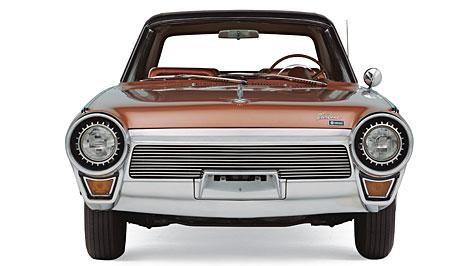 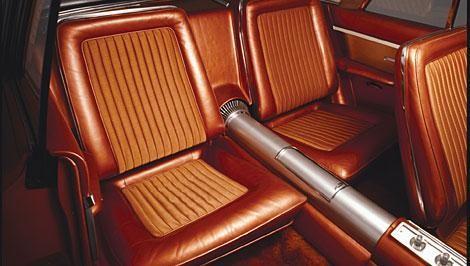 A traveling Turbine car exhibit crossed the United States, visiting large shopping centers and select Chrysler-Plymouth and Dodge showrooms. There were displays of actual Turbine cars, engine exhibits and other Chrysler product displays. Corporation representatives accompanied the exhibits to explain the Turbine car program and give away lots of printed hand-outs to interested visitors. 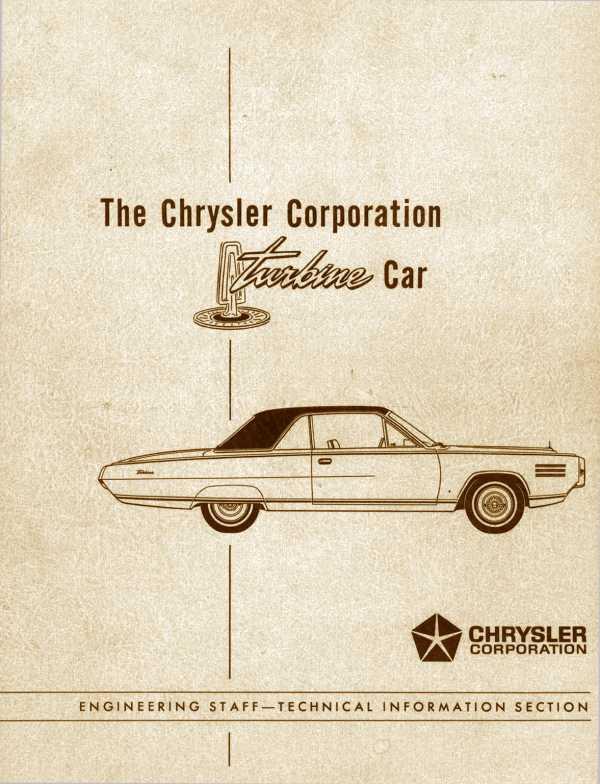 The consumer research side of all this involved loaning 50 turbine cars to over 200 families across the nation in a two year program to gather performance data and owner feedback. Btw, it was also the best advertising campaign Chrysler ever came up with. For each family selected to receive a car, Chrysler paid for everything except fuel. The loan agreement specified that the "owner" be present whenever the car was driven, that the car be kept clean for public presentation and the car would be returned after a three month period to Chrysler for reassignment to another family. 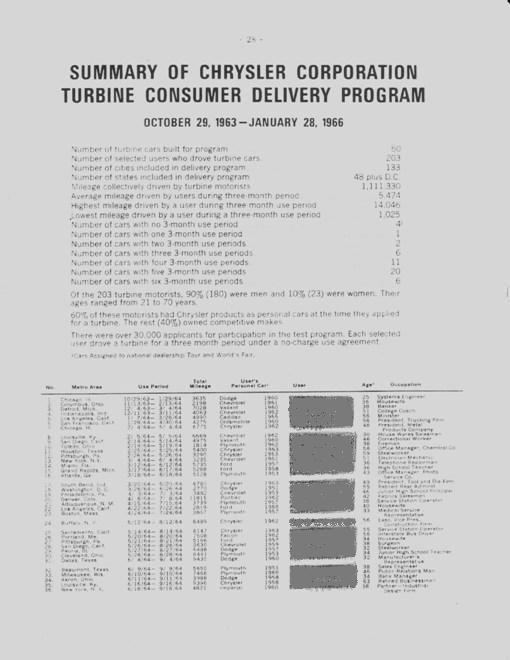 The detailed recordkeeping associated with this project has allowed me to identify the two families that received turbine cars in my hometown of Norfolk, Virginia. Family 124 received their car on 2/10/1965 to 5/10/1965 for a total of 5,583 miles driven. Family 169 received a turbine car from 6/8/1965 to 9/8/165 for a total of 5,548 miles total. From the dates listed, I believe it was the car of Family 169 that I saw driving past my house during the summer of 1965 almost daily. Yes, this is not just pretty pictures for me; I actually saw the Chrysler turbine car drive through my neighborhood on several occasions. Hey, it was Norfolk so of course I saw the turbine car around town too. One night, as my family was on the way home from visiting relatives, I saw the Chrysler turbine car parked outside a local night club for the moneyed crowd. Wow, how I wished I could have talked to a member of that lucky family. 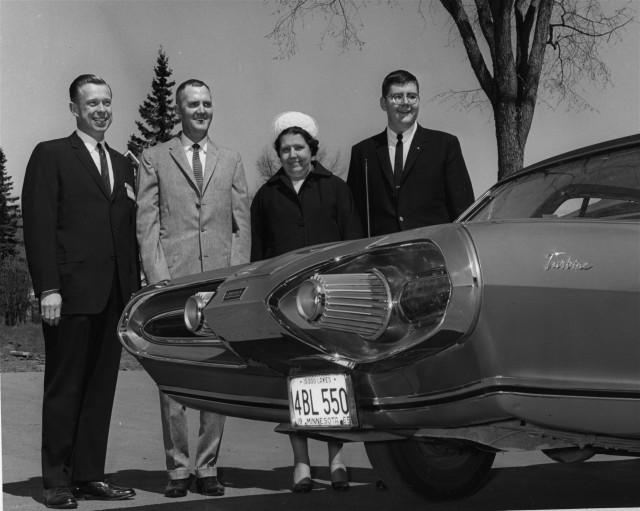 Here is a photo of Family 160. The Olson family of Duluth, Minn. They received their car from 5/13/1965 to 8/13/1965 and drove it far a total of 12,242 miles. Mark Olson has a website packed full of information on the Turbine car, the Chrysler consumer research program and the Turbine car traveling exhibits.
(http://www.turbinecar.com/introduction.htm)

So, now the verdict. Field reports were positive. Complaints were few, as were repairs. Problems were minor, mostly unassociated with the engine. Most drivers expressed interest in purchasing a turbine-powered car. 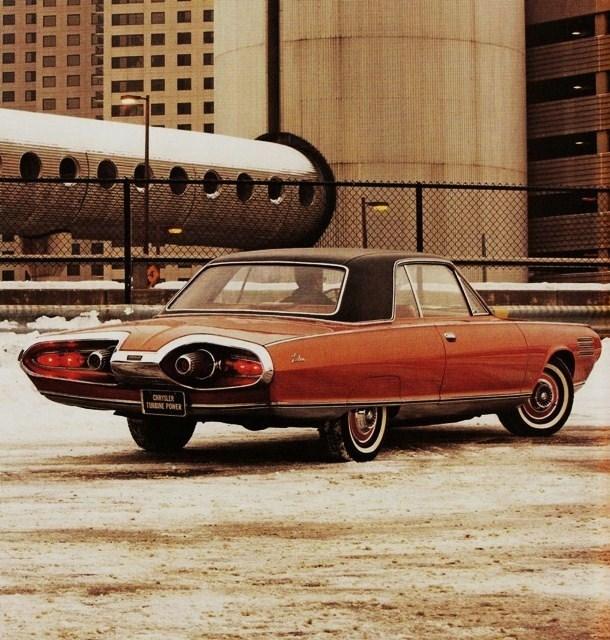 Great! So where are all the jet-powered cars of the 21st century?

See, something doesn't add up here. All the laboratory tests and track reports and consumer feedback say "go for it". Yet Chrysler apparently abandoned the turbine engine. After one of the best planned public demonstration/advertising campaigns in automotive history, No Jet Car!

The written reasons are logical; engine expensive to produce, excessive exhaust heat, excessive lag time from idle speed to full throttle acceleration, limited horsepower, higher than expected exhaust emissions. What surprised me were reports that when drivers took their foot off the accelerator, the car wanted to keep going! Once the turbine revved up to power, it didn't want to decelerate. Indeed, turbines don't really like to go slow and the turbine engine idled at 18,000 rpm. As a result, drivers kept standing on the brakes constantly. Turbine cars went through brakes more quickly than would've been considered normal and acceptable wear.

Problems noted but not insurmountable. There has to be more to the engine's cancellation than this. Something still doesn't add up. 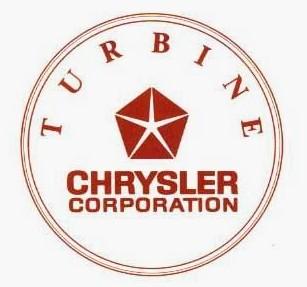 One clue is from the Allpar website. By 1979 Chrysler Corporation was on the verge of bankruptcy. In exchange for loan guarantees from the U.S. Government, Chrysler was forced to sell the Chrysler Defense division along with its M1 turbine-powered tank program. But that wasn't all! Chrysler was also forced to abandon all plans surrounding turbine engine passenger car production. One version of the 1980 "K" car program involved a 1981 Chrysler New Yorker Turbine car variant that was ready for production tool-up! All that was needed was funding. 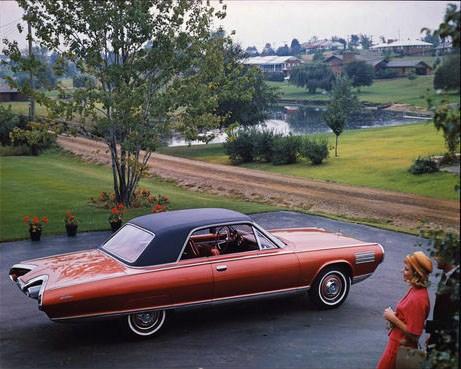 Can you believe it? We came that close to a regular production jet-powered car! The Feds killed it as "too risky". Hey, everything's risky. Risk underlines the entire car business. Playing it safe only leads to financial ruin.

But that's another story. 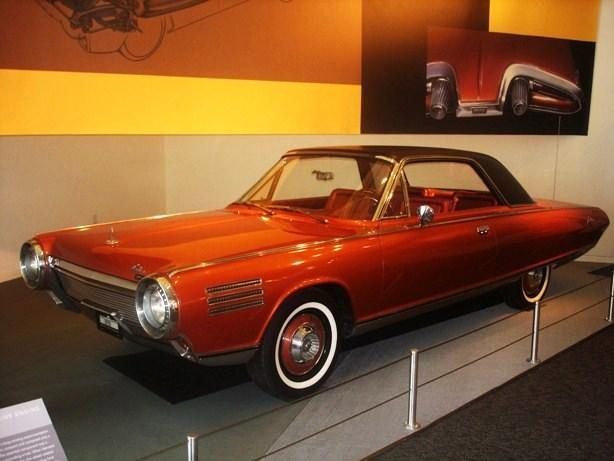 11
Quote O' Matic
Tigger and Rabbit: "Where's the propeller?'' ''Tigger, trains don't have propellers. Although it does seem to be missing its rudder. -Tigger Rabbit"
Added By: System
The New Adventures of Winnie the Pooh
An unhandled error has occurred. Reload Dismiss