One of the most fustrating games of the 90's.
By eddieizzle
On
Hey guys,

Eddie here and this is my very first article,it may not be all that great,but whatever :P lol. 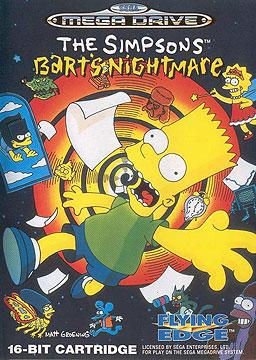 Bart's Nightmare is a 1992 video game developed by American company Sculptured Software based off the hit television show The Simpsons.

The game stars of with Bart Simpson doing a science project.As the night is progressing Bart begins to fall asleep on his desk while studying.His papers begin the fly away and Bart begins to chase them out the window.When he climbs out the window, Bart then begins to fall from the sky and falls right onto the concrete of Evergreen Terrace street.You are to find all the papers that were blow away from Bart's window. 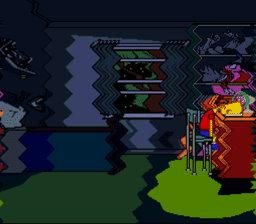 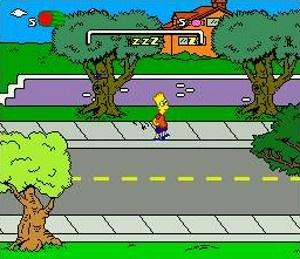 While wondering around the streets of Evergreen Terrance,you may find a couple of strange things that are wondering off as well,such as...

-Mailboxes that trip you, if the player jumps over one they will receive points, watermelons, or gum.

-Basketballs that trip you, if the player jumps over it it will turn into a skateboard, which if the player rides, they get free "Z"s.

-Old ladies that try to kiss the player, if they do they will take points away.

-Fairy Lisas that will turn the player into a frog.

-Jimbo, Dolph and Kearny will make the player walk with them, if they walk the player off screen the player loses the game. 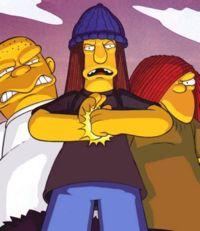 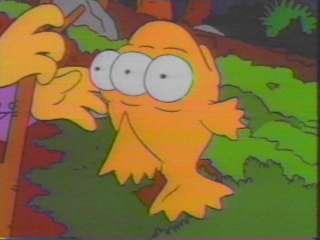 -The Statue of Jebediah Springfield's head will trip the player. 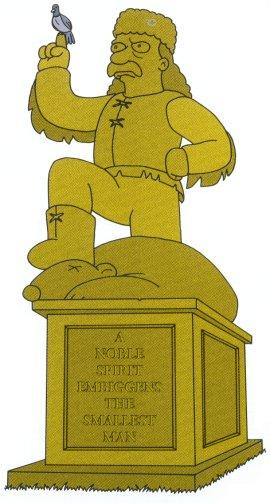 -School buses will run the player over.

-Brown blobs on the road will slow the player down.

-Principal Skinner holding a suit will give the player the suit and will make the player invincible.

Bart can collect his skateboard, which acts as a power-up and temporarily increases the player's speed. Jimbo and his gang would coerce Bart into strolling with them, to which Bart would lose control of his movements and have to move with them, even having to take damage. If Bart touched a flying saxophone, Lisa Simpson with pixie wings would sprinkle fairy dust on Jimbo and his gang and transform them into rats, freeing Bart. However, if Bart is by himself, the Lisa pixie would turn him into a frog, where the frog Bart could not attack. If Bart caught a kiss blown to him by an old lady, it would revert him to his human form. Bart would also have to use bubble gum to blow a bubble to repel enemies as well as collect floating Z's. An important trick would be to catch Z's at opposite ends of the game screen which served as "goal posts", thus extending the level of play in the game.

When a page is found in Windy World, the player must jump onto it, where Bart will shrink down on the page, and the player has to choose one out of a selection of two randomly chosen mini-games. The player must point Bart to one of the two color-coded doors to play a mini-game and retrieve a lost page of Bart's homework (if the player doesn't choose, Bart will automatically select the left-hand side door). The doors and games are:

-The green door: Bartzilla, where Bart must stomp through the streets of Springfield, eventually climbing the Springfield State Building and fighting "Homer Kong" and "Momthra." 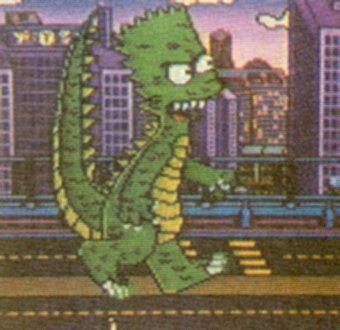 -The violet door: A journey into Bart's blood stream, where Bart must use an air pump to inflate and destroy germs. This mini-game has a cameo appearance from Smiling Joe Fission (a character from the first-season episode "Homer's Odyssey").

-The yellow door: Itchy and Scratchy, where Bart must avoid the manic duo, as well as various other household objects that become enemies (the oven shoots fire, the telephone explodes, Pyro-Vacuums etc.) This is the only mini-game divided in two; Bart must play one half first and the other half next.

-The blue door: Bartman, where Bart flies over Springfield as a superhero. Along the way he fights many bosses, including Sherri and Terri in a hot air balloon, Barney Gumble on a pink elephant, Waylon Smithers in a blimp (you face him twice), and eventually Mr. Burns in a biplane. Besides the enemies, Bart must avoid clouds of radioactive gas. Bart also receives soda bottles from Apu on a magic carpet in this level, which serve to raise his energy bar.

-The orange door: Indiana Bart, where Bart must navigate the maze-like "Temple of Maggie" -One of the most frustrating mini games ever to be played in a game!!


The mini-games can be played in any order; the pages awarded will be 1 through 8 depending on the order they were retrieved.

The game ends when Bart dies (thus ending his dream) by losing all of his Zs (Windy World will be covered in a white fog, suggesting Bart is about to wake up) and taking damage one more time, or if he accomplishes all the mini-games. The first shot is a pic of Bart asleep at his desk in his room; if not all pages are recovered, Bart's homework will end in a scrawl, but recovering all pages will have the words "THE END" written on Bart's paper. Depending on how many mini-games Bart finishes and how many points he gets, he is awarded a letter grade. Bart will hold it up for the player to see, and then the different endings are shown where the players sees the Simpson family's reactions to Bart's grade by having the paper affixed to the refrigerator, which is strikingly similar to the final scene in Bart Gets an F. An "F" grade, the worst ending, would have the entire family upset at him, but a slightly higher grade would cause at least Homer to be pleased with Bart's work. Lisa would be annoyed with Bart's work unless the player manages to get Bart an outstanding grade.


Overall,this game isn't really that bad for any Simpsons fan,but beware on how frustrating this game can be at times!