A look at 1999's Hydro Thunder, one of the most memorable arcade games of my childhood.
By softwaredreams
On 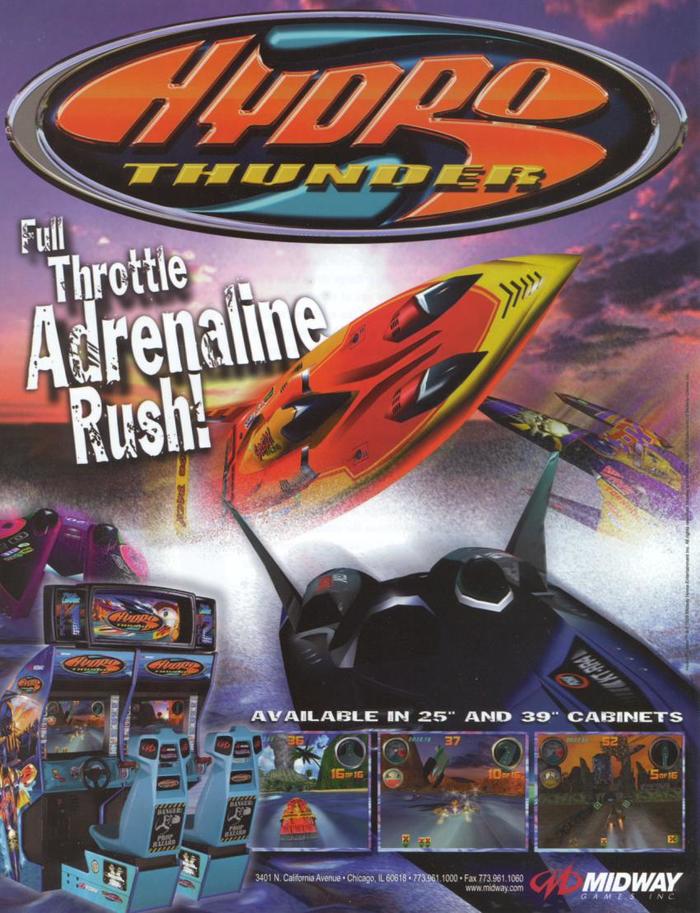 Racing arcade games always appealed me to the most as a kid. My imagination immersed me in the game as I sat in a plastic racing seat and controlled my car with a steering wheel, slamming gears on the plastic shift leaver. No racing game captured my attention more than Midway Games' Hydro Thunder. Rather than cars, Hydro Thunder was themed around racing futuristic speed boats. The eye catching teal colored cabinet and unique control scheme had a big impact on me. 18 years after its release Hydro Thunder is still one of my favorite racing games. This is a retrospective on the late 90's arcade classic. 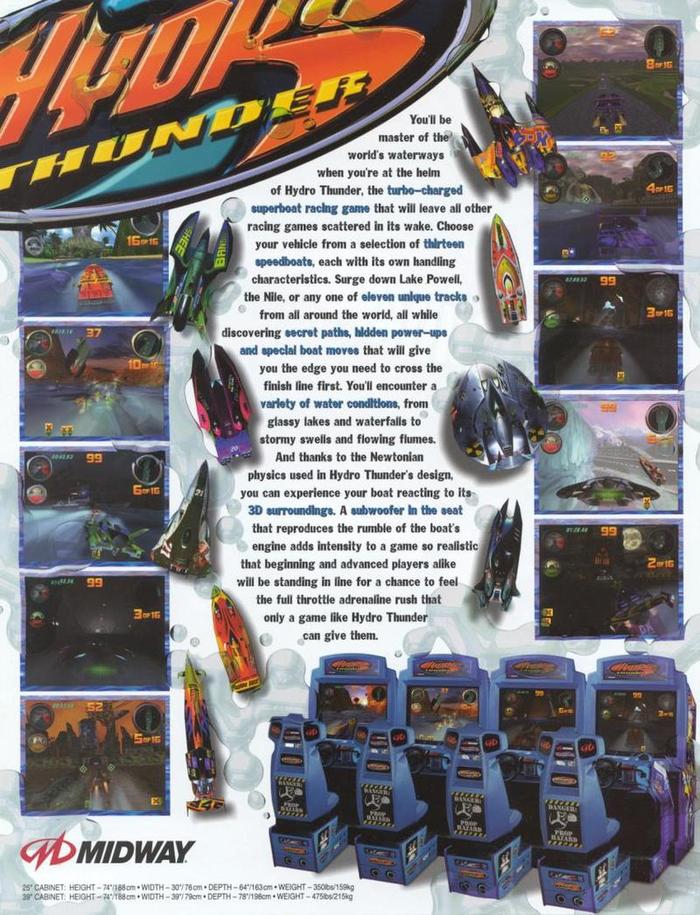 Hydro Thunder was developed and realesed by Midway Games in 1999. It used the Midway Quicksilver II arcade system board and an Intel Celeron CPU. The games sound came from a amplified stero and subwoofer setup, and the video display was a horizontally oriented, medium resolution raster, color CRT. Of course as a kid I had no idea what a CPU was, or even wondered what a cabinet's specs were. No, if it was fun and had cool vehicles it was deemed a good game in my eyes. 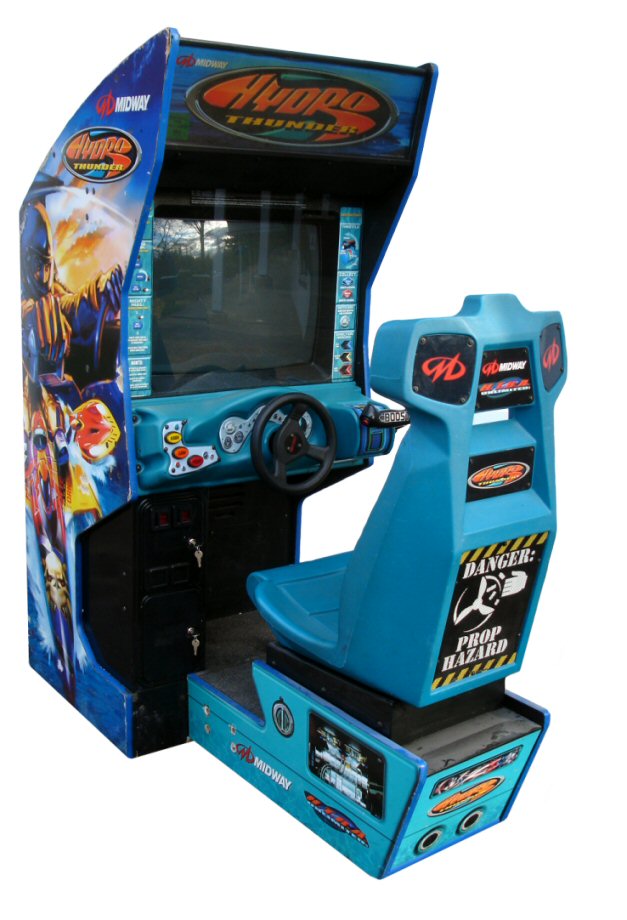 To me, one of Hydro Thunder's biggest draws was its cabinet design. All of the machines plastic was molded in a chill teal, which just so happens to be my favorite color. The classic example of the cabinet was a sit down style one like many racing games. It used the same seat as San Francisco Rush and the later Offroad Thunder and the steering wheel was taken from Cruis'n USA. Since Hydro Thunder featured watercraft, in place of pedals was a unique throttle stick designed to replicate the throttle control on a real life boat. The seat had a subwoofer inside it. Hydro Thunder used this to create immersion for the player, the feedback volume was set higher than the play volume to make the seat rumble and vibrate. I still rember the effect, it truly felt like you could feel the rumble of your boats engine and feel the waves hit the bottom of your hull. It was such an amazing play experience that augmented the gameplay to another level. Well, to kid me anyway. 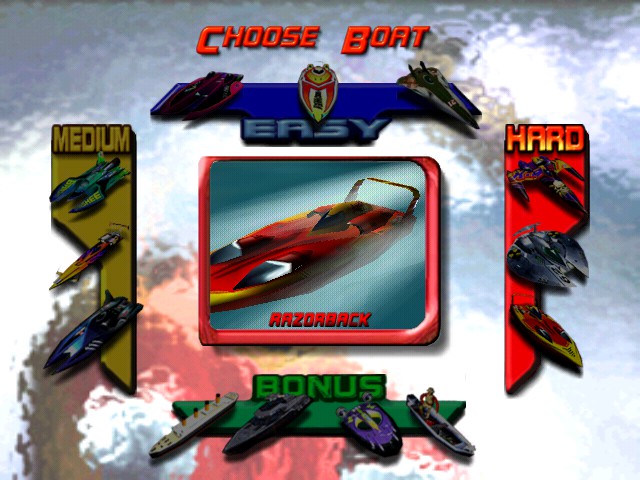 Hydro Thunder had creative vehicle designs. Some of the boats were visually inspired by real life racing powerboats of the time and others had a very sleek, super late 90's futuristic design. The boats were huge and had massive, roaring engines. Hydro Thunder uses a boost system via red and blue colored power ups. Collecting one would add fuel to your boost tank, which was unleashed with a satisfyingly clicky red button on the throttle stick. I vividly remember when you first pick up boost fuel, panels on your boat slide back and hidden turbine engines pop out. These mid-race transformations were the coolest thing ever to my kid mind. Hydro Thunder featured 9 boats total, broken down into easy, medium and hard difficulty with three boats per difficulty. Obviously, the higher the difficulty the faster and harder to control the boat is. There were also a few gag bonus boats you get with codes, but I never even knew they existed. 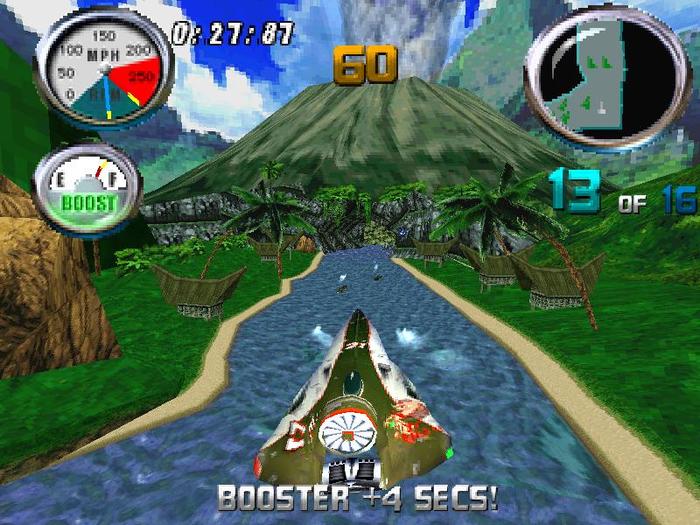 The gameplay of Hydro Thunder really isn't any different from Midways' other racing games of the era like RUSH and Cruis'n. Races are a mix between point to point and circuit races in a variety of locations. A timer ticks down throughout the race, passing through checkpoints placed along the track extend your time. The goal is to finish the race in first place before the timer hits zero, which is game over. Other than boost fuel pick ups there are no power ups are anything if that nature, victory is all about skill and shortcut knowledge. You have a few tricks to use, the Mighty Hull, performed by boosting into an opponent racer, sends them crashing into the air. There is also the Hydro Jump done by boosting and braking at the same time. It makes your boat jump, as the name implies, and if you do it off a ramp you'll catch major air. All the shortcuts in Hydro Thunder have to be reached by Hydro Jumping off specific ramps on the track. The Hydro Jump was always tricky for me, since it requires you to hit the brake messing up can just slow you down. 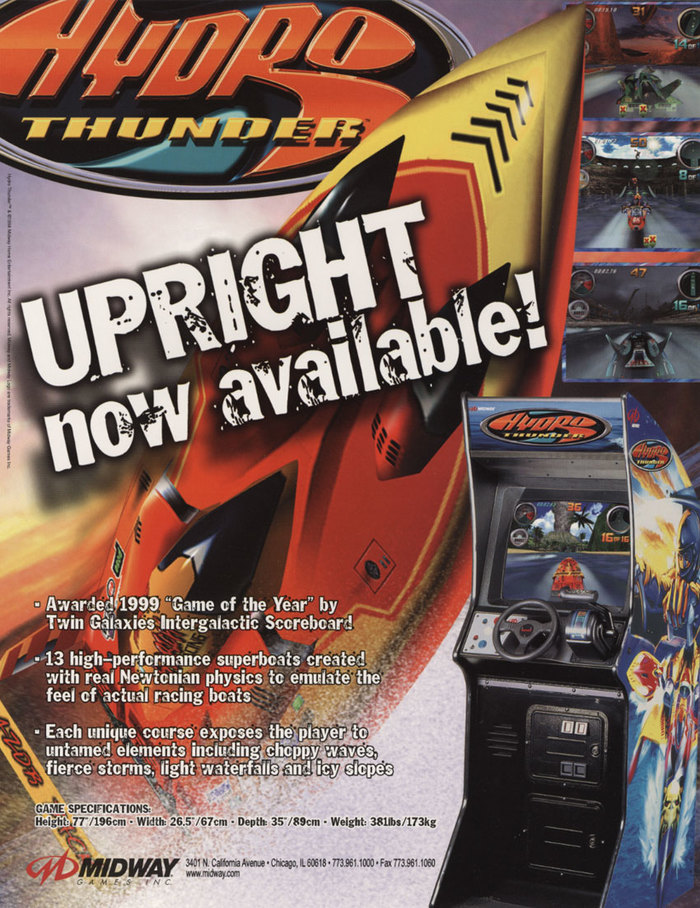 There were a few variants of Hydro Thunder cabinets. A vertical machine that lacked a seat was produced, which I imagine was cheaper to purchase for an arcade. There was also multiplayer Hydro Thunder that was two or four machines long. But out of them all, I personally like the solo sit down cabinet the best, as it ate the most of my quarters as a kid. 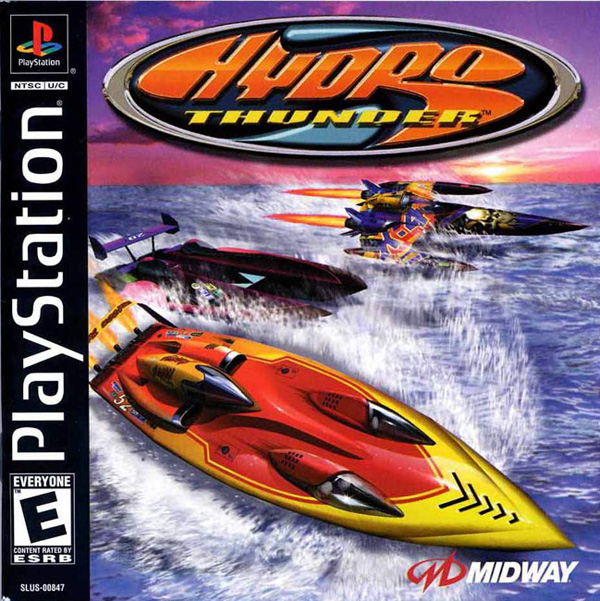 Hydro Thunder was well received when it was contemporary and had three home console ports on the Playstation, Dreamcast, and N64. Not a whole lot changed on the jump to home console other than various levels graphics upgrades depending on your console, and a few bonus tracks.

What else is there to say about Hydro Thunder? It was one of the most memorable arcade games of my childhood, and many others foundry remember it. Hydro Thunder still has its own small fanbase even today. This just goes to show that Hydro Thunder's fast gameplay and unique cabinet features made it a stand out of it's time, and what other game can you think of that has boat racing? Hydro Thunder still makes waves as one of the best arcade racers ever made.
7
Login To Vote!
More Articles From softwaredreams 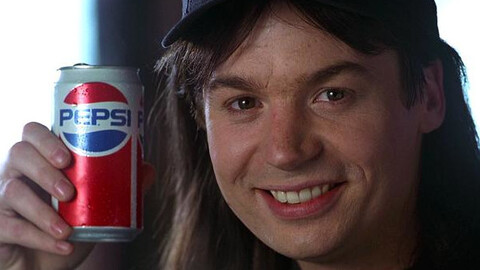 15
softwaredreams
Gotta Have It! Pepsi in the 90's
A look at one of the biggest soft drinks time throughout the 1990's

1
Quote O' Matic
Wisconsin Father (To Ford): "Excuse me. Could you tell us how to get to Mann's Chinese Theater?"
Ford: "Go back to Michigan, asswipe."
The Adventures of Ford Fairlane