Soar where no man has gone before!
By NotSoMightyMax
On 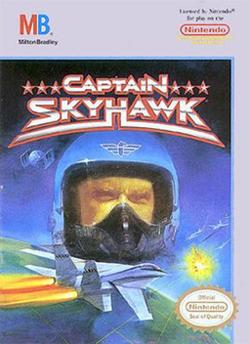 "No one noticed when they landed. And now it might be too late to stop them!"

What better opening line for a classic NES game then the cliche drenched back-of-the-box-writeup for Captain Skyhawk. It continues with more cliches and even though they may be tacky, it didn't matter. This was gripping drama!

"In remote corners of the globe, alien invaders are draining the Earth's energy and "feeding" it to their space station. When the power drain is complete, the aliens plan to vaporize the Earth with a deadly laser blast."

The stage is set, the pawns are in play and like a gleaming shimmer of hope
"Captain Skyhawk - the only person who can stop them!" climbs aboard his 'high-tech' F-14VTS fighter jet - fully equipped with its own arsenal of deadly weapons. 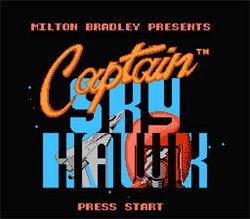 Right off the bat you notice something that stands out like a sore thumb in a video game. Milton Bradley? Wait a sec...aren't those the people that made MouseTrap and The Real Ghostbusters boardgames? You're right! It started in 1983 with Survival Run and Spitfire Attack for the Atari 2600. After mild success, Milton Bradley took a break from video games until 1989 when they started back up again. This time for the Nintendo Entertainment System. Of all the games Milton Bradley released, Captain Skyhawk is, without question, their crowning achievement. 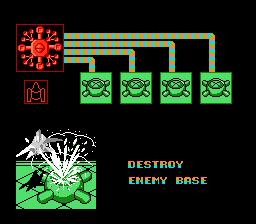 Your mission is simple...destroy the Enemy Base siphoning energy from the Earth. So off you go into the wild blue yonder in your hi-tech modified F-14VTS - a fictional version of the ever popular USAF F-14 Tomcat. 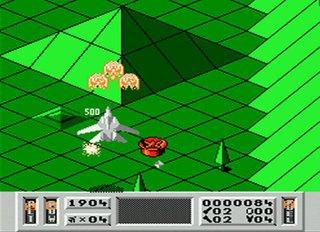 That red turbine looking thing reminds me of a monster from The Legend of Zelda.

Taking control of Captain Skyhawk, you start every mission taking off from a runway at the beginning of each level. From there you make your way through an isometric pseudo three-dimensional world shooting down enemy planes, tanks, ATVs and a red turbine...thing.
There are also small pyramids that open up and take pot-shots at you as you fly over head. Adding to the 3 dimensional effect you are able to raise and lower your altitude by pressing up and down on your controller respectively. In turn this also affects your airspeed.
One very unique and interesting feature I've always been wowed by is, if you fly straight over the tallest inanimate pyramids you take damage and are killed. Being the classic NES game that this is, you are only given 5 lives when you start and a total of 3 continues. (I wouldn't have it any other way)

At the end of your primary mission objective you must make your way across the open ocean to a jump-point that will send you off to your space station where you can dock to stock up on all the latest weapons. That sounds easy...but wait, there's more! Not only does Captain Skyhawk provide you with top-down isometric pseudo 3 dimensional graphics but it also offers a more realistic approach with a third-person stylized pseudo 3 dimensional fighting style. This is where Captain Skyhawk separates itself from the competition. You get to fight and fly in both styles. It has a very similar style to that of Konami's Top Gun. As each level of Air-to-Air combat takes place, your enemies become increasingly more difficult. In the beginning they merely shoot at you with Machine Guns. As you progress the Fighters flying at you from in front start to fire missiles at you. As the game hits the later levels the Fighters from behind you start to fire missiles at you. Eventually you're got missiles come at you from all angles and can make things somewhat tricky if you're not ready for it. The missiles from behind, I have found, are the more irritating of the two. Seeing as there is no warning, just a Fighter appearing behind you all of a sudden, if you're in mid maneuver and they fire a missile you're likely to get hit. One hit deaths carry over from the top-down mode of the game into this mode as well. 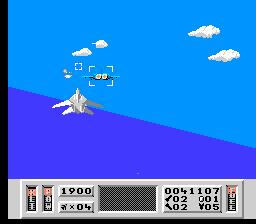 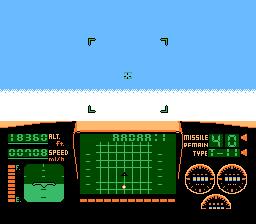 When you've fought off a set number of enemy fighter planes you jump off into space. Between the jump and landing at the space station you're filled in on how well you did in shooting down the enemy fighters. Your scores for the level are added up and your total score is shown to you. After all is said and done we get to probably my favorite feature of the whole game. Docking with the space station is as pseudo 3D as the rest of the game, but it really makes you feel like you're actually playing in a 3D environment. You must line up your F-14VTS with the opening slit of the docking bay on your space station. All the while your space station is spinning around and the slit is constantly moving with it and when you're lined up just right, you pull off a barrel roll as you fly in and land. 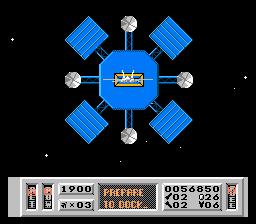 Perfectly lined up for entry

The space station is really nothing more then a re-arming point that allows you to purchase 2 types of Missiles, Bombs, and upgrade your Machine Gun. As you progress through the levels you collect credits to be used for purchasing these upgrades...from your own space station. This is kind of where the design was more for game design then functional reality. You gain enough credits to fully upgrade your Machine Gun and purchase all your Missiles and Bombs after about the third mission is completed. One thing I've never understood about the game is when you've fully upgraded your Machine Gun it still looks like you can upgrade it some more. This store is one of three down point of the whole game for me. 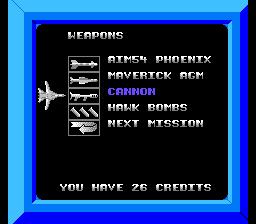 After 7 missions, you've made it to the end. The final mission. The mission to drive away the invading aliens for good and destroy their leader once and for all! Along with Mission 4, Mission 8 requires you to pick up a kidnapped scientist behind held in an Alien penitentiary of sorts. Looks kind of like the tri-force. 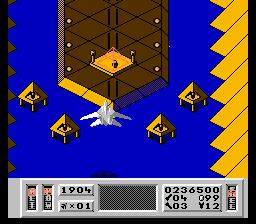 The whole point behind picking up these two scientists is that each of them has half of a secret weapon that is equipped to your jet just before you take on the final boss in order to send his alien ass back to where it came from. So after one final head to head with enemy Fighters the culmination of this valiant and heroic effort comes to its climax. The boss fight. 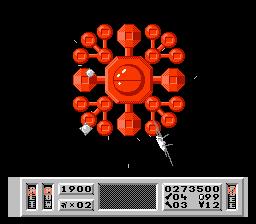 The fight itself doesn't possess all that great of a challenge. The sides fire missiles at you while you have to take out the eyes on the outside. After they've been destroyed the final eye opens up and is your prime target; unload on that sucker until he blows up. Herein lies the two and three down points of 'Captain Skyhawk'. The weapon you've spent all this time getting to the scientists and having the pieces installed is never used at all in combat. The third and final down point for me is that there is no ending to this game. All you get is a "Congratulations - Alien Invasion Destroyed" and then you're prompted to enter in your name at the high score screen. 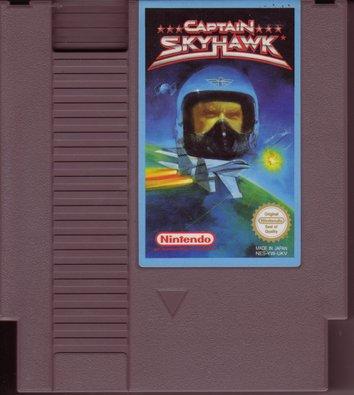 Good? Bad? Ugly? However you end up calling it, it'll always be a 10 in my heart.
So there you have an overview of one of my favorite games that defined an era in gaming. I can't stand here and tell you this was an amazing game by all standards, but everything it did have I enjoyed and gave me the fond memories of playing my NES when it was "the in thing." I mentioned it several times, and if you've played 'Captain Skyhawk' for yourself, you'll notice that there are quite a few references in style to Zelda. Coincidence - perhaps. Whatever it may have been, it just helped solidify the connection between NES games and a specific and special style that was unique to the NES.
This was my first kick-at-the-can for Articles so I stuck with something straight-forward. I hope it was entertaining and perhaps informative to the degree it could be.
Cheers!

I also hope I've appeased velcrohead by adding something more to this then the generic "video game boards thread topic" article he truly, truly hates.
13
Login To Vote!

Captain Skyhawk on Nintendo by MB