Explore the artifacts of 30 year Marvel Maniac
By Hoju_Koolander
On
Some of you may remember my Collector’s Remorse series from a few years back, wherein I shared a few items of my personal collection that I considered selling to pay for my soon to be born child. My Mean Gene’s Burgers t-shirt was even featured on wrestlecrap.com’s "Somebody Bought This” feature. Well, since the kid is almost 2 now and seeing as how we just paid the last hospital bill, it seemed like a perfect time to wrap up the trilogy. 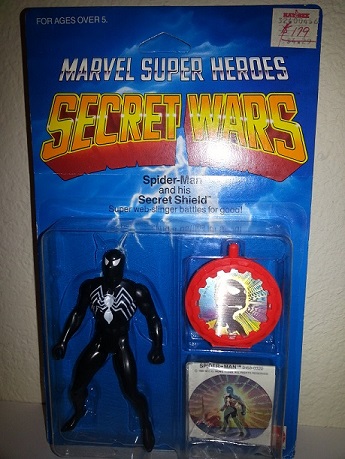 As you can tell from my avatar, Spider-Man in the black costume is my favorite look for the wall-crawler (with the 2099 version a close 2nd). Years back I decided to focus my collection on just the black costume figures and when you’re a completest like yours truly there’s no better place to start than the beginning. What you see above is the Marvel Super Heroes Secret Wars Black Costume Spider-Man action figure (what a mouthful) from 1984. 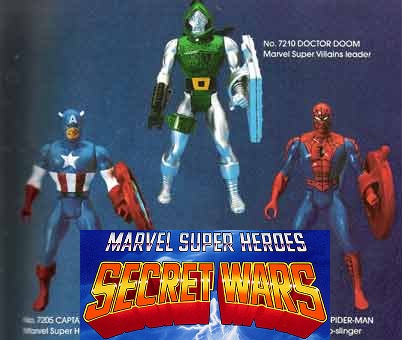 When I was young I owned the classic red & blue Spidey, Captain America and Doctor Doom figures without even knowing that the comics existed. I actually got all sorts of Secret Wars branded merchandise for my 3rd birthday, having never looked at the source material. All told, the 12 issues in the series don’t add up to much more than the main bad guy, The Beyonder forcing the heroes to fight the villains as if he was a kid playing with the toys. So not knowing the back story didn’t really matter, I had been watching Spider-Man and his Amazing Friends cartoon and that told me all I needed to know. 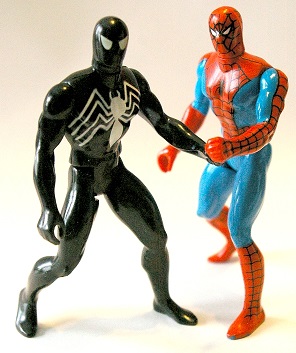 I could be wrong here (I know I am if you count Mego dolls), but I am pretty sure this is the first variant action figure ever produced. All they did was repaint the regular Spider-Man figure with the new alien costume design and charge another $4.29 for it ( I paid 20 times that on eBay), but what a repaint! The awesome part is how they re-create the scene from the comic on the back of the box, so that clueless kids like me could catch up on what they had missed. 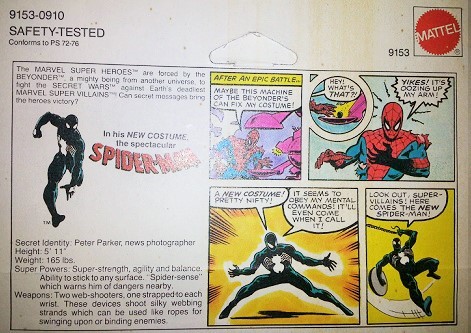 The simplicity of this figure really reflects the time it was produced in. Like He-Man or those huge, rubber WWF figures, there’s wasn’t a whole lot going on in terms of articulation or detail, but those lenticular shields used a similar effect often found on stickers and bookmarks that most kids got a kick out of. In the end, these were just fun creatures you could smash together. Speaking of creatures who like to SMASH things, check out this piece of nostalgia. 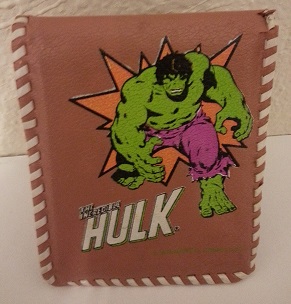 I have had this Hulk wallet as long as I can remember. The fact that is has remained in this good of condition is a Marvel Miracle, seeing as it is made out of flimsy vinyl with a leather-like texture. I chalk it up to the fact that the image of an angry Hulk on the front has likely scared away any mice that might have tried to chew on it. Also, the fact that it’s not even big enough to fit a dollar in without folding it up kept me from going all hipster to use it ironically as my everyday wallet. 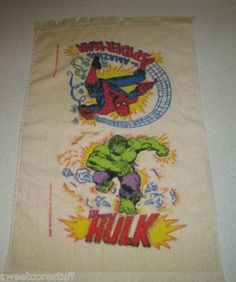 This actually had a companion piece growing up, a long since deteriorated beach towel featuring “Old Green Jeans” and everybody's favorite "Web-Head". I remember trying to dry myself off with when I was 5, only to realize that it had become nothing more than a semi-translucent rag with a big green stain that could at one time be identified as the Hulk. The “Jade Giant” had finally met his match in the punishing darkness of a Kenmore washing machine.

Next up, the Peter Pan Read and Hear storybook featuring the tale of Spider-Man and the Dragon Men. You remember these kinds of books. You put the cassette in your Fisher-Price tape player and then waited for the beep to turn the page. What’s interesting is that Superman and Wonder Woman were getting in on the read and hear action too. I think I made the right choice going with Spider-Man, since Wonder Woman’s story seems to be about her invasion of Aqauaman’s turf to fight sharks, while Superman has taken up a new hobby of abducting small children. 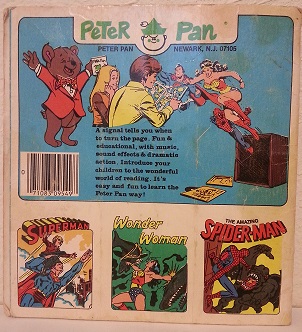 According to cassette tape, this was part of 2 book set, since side 2 reads “The Hulk At Bay”. I’m assuming this is not the story of Bruce Banner having dinner at Michal Bay’s house and Hulking out after a screening of the new Teenage Mutant Ninja Turtles movie, but anything is possible. I had quite a collection of these book and tape deals growing up, but this is the only survivor. Dragon-Men never say die, I guess. 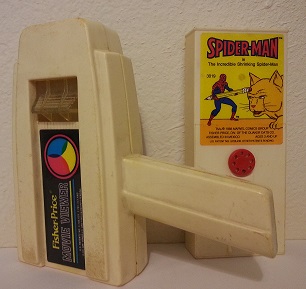 Now some TV junkie kids like yours truly could not be entertained by static pictures alone, no matter how many sound effects they shoved on a tape. Even View-Master was kind of rip-off when you realized how much "awesomer" it would be if those pictures were in motion. Luckily Fisher-Price figured that out and gave us the coolest of retro toys, the Movie Viewer. 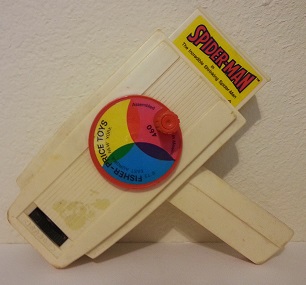 Shaped like a gun or a movie camera depending on the child’s predisposition to violence, this thing functioned like a personal projector with a film strip that beamed a movie right into your eye. Of course, the kid had to do their part by turning the wheel to make the pictures dance. I’m surprised I didn’t have forearms like Popeye with all the time I spent cranking the dial to watch “The Incredible Shrinking Spider-Man” cartridge.

In this adventure, which was adapted from an episode of the pre-Amazing Friends version of the Spider-Man cartoon, Spidey was fighting a dumpy, redhead in a welding mask that shot him with a shrink-ray, reducing him to the size of a mouse. Like you see in the graphic he had to fight a cat and overcome other obstacles of being pocket-sized, which pretty much every super-hero goes through eventually. 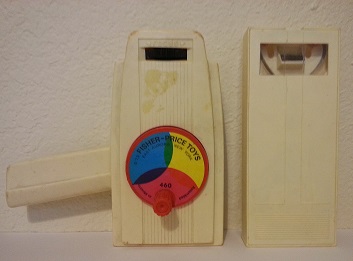 But the best part of the viewing experience was running the film back and forth to make him shrink and grow, shrink and grow, all the live long day. I just think this the coolest idea for a toy and will be a treasured part of playtime past for years to come. To close this out, I want to share with you an item I think will be truly baffling to anybody born passed the year 2000, the Thermos. 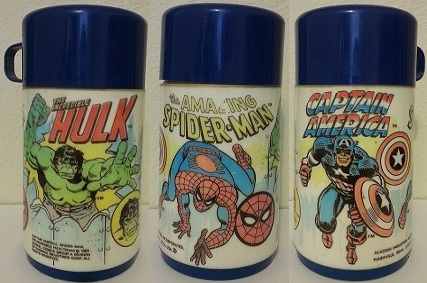 Originally part of my long lost Marvel Super Heroes metal lunchbox set, this thermos made by Aladdin was an essential part of Elementary school lunches from 1st to 3rd grade. There was no better way to show how cool you were on the playground than with a cartoon or TV show inspired lunchbox. I especially loved the texture of the raised images pressed into the metal, it was one step away from a 3-D experience with a ham sandwich inside. 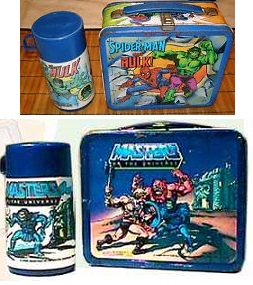 Usually filled with apple or grape juice, I loved the sensation of drinking from this weird, cylinder with graphics of my favorite heroes on them. The flip-up nozzle was so blocky and the beige coloration screams 1980’s to me. I eventually upgraded to a Masters of the Universe lunchbox, but this one was my first and the thermos endures for a reason, it's a solid piece of hardware! 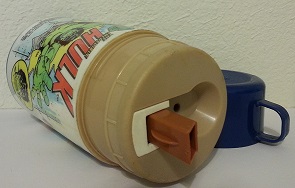 Well, that wraps up this installment of Collector's Remorse, though as you can see this stuff has a lot of sentimental value. One way I’ve managed to hang on to these collectables despite my wife’s gentle suggestions to “get rid of your crap” (Love you, dear) is that I have passed them on to my son for his playtime. Allow me to leave you with an image that bridges generations, here is my boy playing with a Secret Wars Wolverine figure and loving every minute of it. Just look at that face! 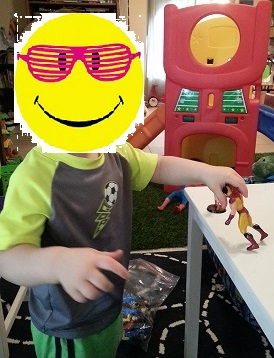