Revisiting my youth with the arcade machine I had while at university
By chimpsinties
On
OK guys and girls, this is my first article here so go easy. I've been reading this site for ages but never got round to posting my own thoughts and feelings.

Back in 2003 when I was in my final year of University (BSc in Computer Science Eeek!) I decided to relive a very fond area of my youth. That area is, Arcade machines. When I was younger back in the late 80's early 90's it was all about arcades. There were no XBox's, or PS3's. If you wanted great graphics and fast gameplay you had to either be very rich and mummy/daddy would buy you a NeoGeo console or you ploughed your hard earned paper round money into an arcade machine.

There were a couple of places you could find these in our small town. One was in an upstairs room at the taxi rank. This was great because if you were up there late on a Friday night when you were supposed to be having a sleep over at your friends, you weren't seen by your parents as they walked down the street (see below). What also made this one great was that one night, the guys had left the cash box unlocked so not only did we get quite a bit of money but we also got free games on that machine all night long and no-one noticed. The other was at the local chippy (fish and chip shop for all you yanks) but the problem with this is that you get busted when your folks walk by when you're supposed to be at your friends house having a sleepover and not down in town playing arcades late a night. The only other place that ever had arcades was the Fun Fair that came around once a year. They had a kind of trailer with about 20 games in which was pretty cool but like I said, limited to once a year and for only 2 days.

Back in those days, these machines took 10p a credit or sometimes 20p if it was a very new game. Even that seemed quite a price to pay and your weekly pocket money didn't last very long if you wanted to get really far in a game. None of this Â£1 a credit nonsense that they have today. How any kid can afford it I have no idea. I know I can hardly afford it these days and I've got a decent job now.

Anyway, I digress. We were talking about the arcade cabinet I had when I was at Uni, Right?

I bought it from EBay for about Â£100 with no game. I had to rent a van and travel about 50 miles to go and pick it up from a proper Aladins cave of treasure. This place must have been where old machines go to die. There were 100's. By the way, I'm not talking about a little MAME cabinet here. I'm talking a full size Jamma cabinet. This thing was like 7 feet tall with a 26" telly. It weighed an absolute tonne. Actually, while getting it into the house I was at the top and my friend had the bottom, I stumbled and fell with the machine landing on top of me. Luckily I landed in a flower bed and the soft soil cushioned my fall a bit. I was shouting for help from my friend but all he could do was cry with laughter. Finally he straitened up and came to help me but then went right past to go inside and get the camera, leaving me stranded and helpless but luckily not in a great deal of pain.

As you can see, it was no small puppy: 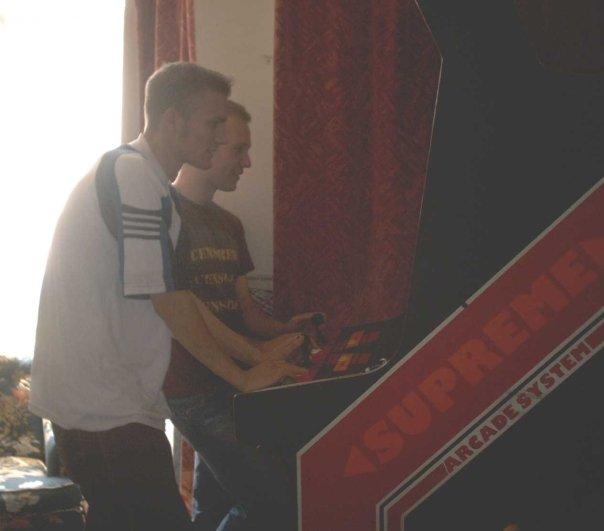 The cabinet had a JAMMA connector in it so any compatible game could be plugged in. They were huge circuit boards with all the graphics, sounds, memory chips on. Some of them were 2 or even 3 layers. You could pick them for from anywhere between Â£10-Â£50 depending on the popularity of the game.

Here is the JAMMA board for Double Dragon: 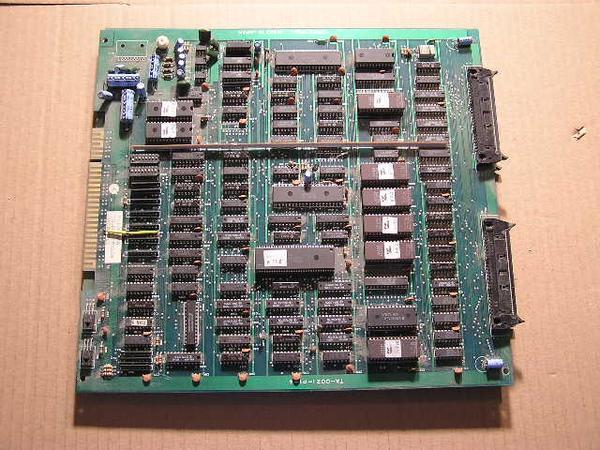 Having this in the house was great for wasting away the evenings and even better for parties but terrible for my degree. I really should have spent more time studying instead of trying to beat my housemate's high score on Puzzle Bobble.

Even though you could set any game to free play, I decided to keep it as a paying machine. No, I wasn't trying to make money out of my friends, I just loved the idea that you had to scramble around looking for another 10p when you died and the famous CONTINUE? 10...9...8... happened. There was always a Frey Bentos pie tin full of change sat on the machine and when it was empty we just cracked the machine open and filled it up again.
Anyway, enough about that, on to the games I owned. 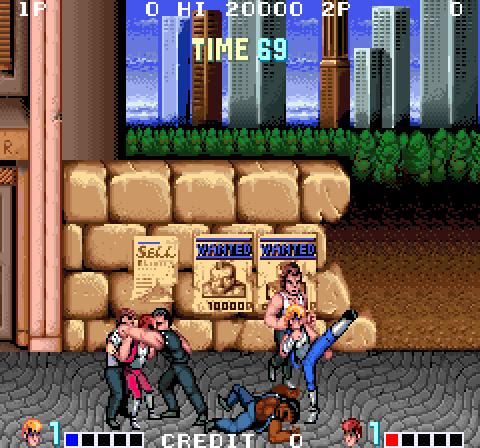 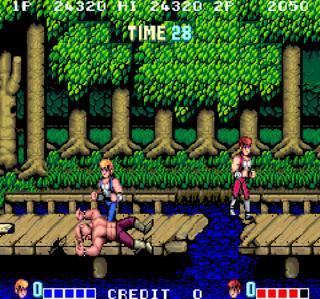 I used to play this game in the taxi rank back home and me and my friend once completed it with only one credit each. This was the first game I bought and I had to wait about a week for it to come in the post when the machine was already in the house but with no insides. When I first fired it up, me and my housemate started a game and just kept ploughing the 10p's in until we'd completed it. On the first go! This made me realise that part of the appeal of the old arcade games was about the risk of losing your money. Once you'd put that 10p in the slot it was all or nothing. This game hardly ever got played after it's initial outing only to show it off to guests every now and again. 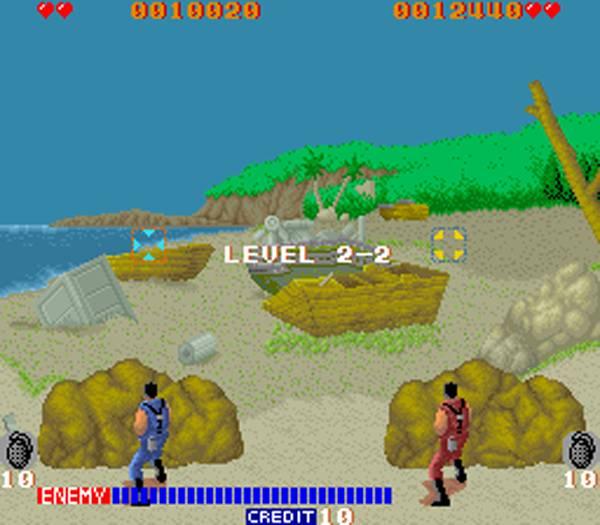 This was kind of like Operation Wolf (you remember the one with the Uzi) but with out the guns. You just used the sticks to control the target. I loved this game but you had to be really disciplined with your money or it was just too easy.

We also had a NEO-GEO console that plugged into the JAMMA slot so we could buy the proper NEO-GEO arcade games. These were much neater affairs and came in a massive big cartridge about the size of 2 VHS cassettes. 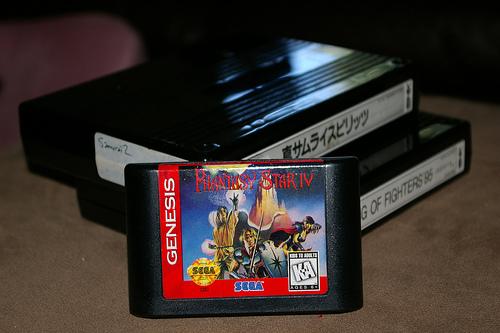 You can see some here next to a Genesis game. 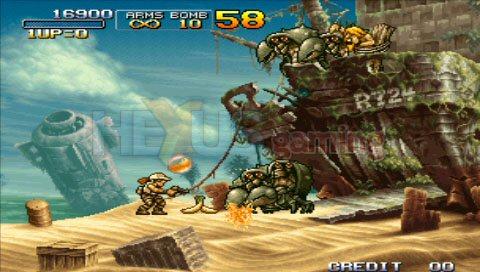 Again I used to like this game when I would play it in arcades as a kid because it used to seem so frantic, fast and fun with great graphics, now a days I guess it's just another side scroller. It's pretty easy with unlimited money so the challenge used to be to see how far you could get with just Â£1. 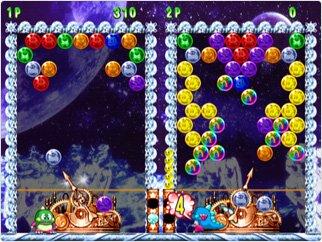 My house mate was totally crazy about this game. He used to play it all the time and to be fair he was bloody good at it. He had all the tricks worked out so he could get the maximum high scores by emptying a screen of bubbles with one precise shot. This was the game that spent most time hooked up and was great a parties because everyone can play it.

And finally the reason I bought the machine, Street Fighter II (1991) 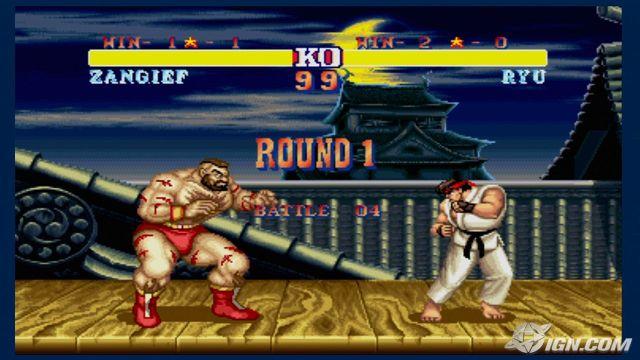 This game required 6 fire buttons and needed a special adapter to attach to the board. I didn't have that so I just ran some wires down and botched a plug of my own creation. You just can't beat playing a fighting game with real arcade joysticks and buttons. You just can't replicate that feel unless you have a huge cabinet attached to them so you can really give them some abuse.

I did have some others too I think there was a golf game and a kind of WWII flying game but it wasn't 1942 or anything exciting like that. Obviously they weren't worth remembering.

Just a couple of honourable mentions about games I really wanted to own but didn't. Most likely because I was a poor student and couldn't afford them or because they were quite popular and I couldn't find them at the time. 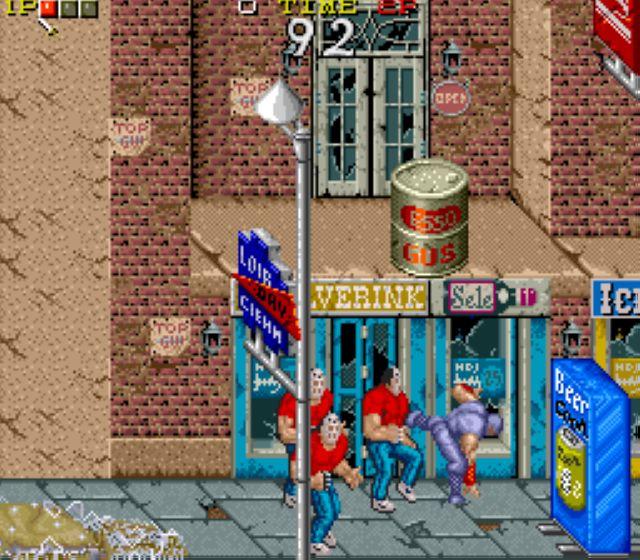 This was another one of those games that was fantastic in 1988 but looks a bit dated now. The ninja dude in this game didn't just punch or kick when you mashed the button, he let loose with a flurry of punches and kicks finishing the bad guys off with a kind back flip kick. You could also smash up the scenery to get food and weapons and hang off lamp posts to kick people. Pretty advanced stuff for its day. Incidentally, this was the game I was playing in the chippy when I was busted by my folks for being out in the town at 11pm on a Friday night when I was 10. Ooops! Sorry mum ;o)

And last but my no means least. My favourite arcade game of all time:
Golden Axe (1989) 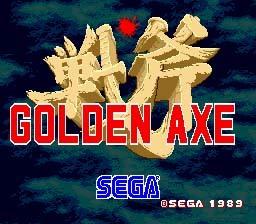 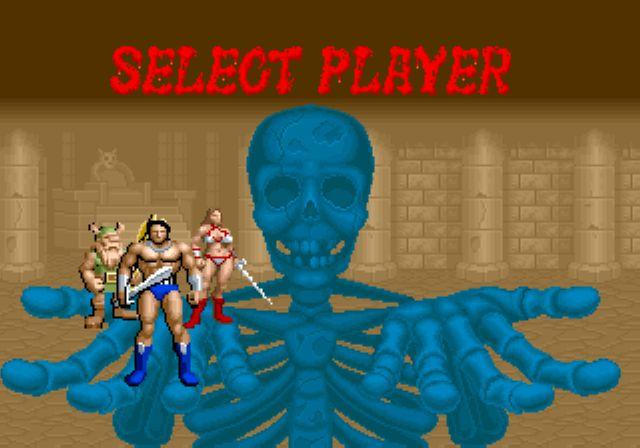 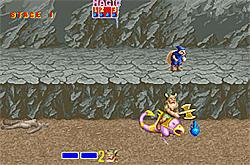 This game kicked ass so bad. I don't know what it was. Maybe it was the cool thwakking noise it made when you were beating down on a poor stunned enemy, maybe it was the magic potions you collected and threw at the bad guys. I just loved it but unfortunately never owned it on my own machine. There was always something very special about the arcade version of this game that non of the emulations seem to be able to being home. I can't quite put my finger on it, maybe it was the size of the sprites or the way they moved I don't know but none of them were as good as the original arcade version.

This brings my article to a close. I hope you've enjoyed my first attempts and it's been a proper trip down memory lane for me. I've got to admit, if I had the space I'd probably get another cabinet and stick a MAME box in it even though I think it's a bit of a cop out. At least that way you don't have to go about scouring EBay for the games.
18
Login To Vote!