The list of the best and scariest movie monsters
By Achilles
On
A Shadow appearing in different locations. A sudden move. The sound of the heartbeat.

Who doesn't remember and love the scary movie monsters and creatures that haunted our dreams when we were kids and/or teenagers. With modern theater unable to scare or create memorable villains and monsters, and bombarding us with dragons or zombies that are entirely generated by CGI (The Cave or Silent Hill), the horror genre lost its soul, with very few exceptions. Also, it's not fair to compare anything to the old classic masterpieces whihc are unmatched anyway, but its so good to sit down and re-watch some of the old monster/aliens/creatures movies, which are instant classics. Since my era was the 80's, I'll list some of my faves and ill try to make the list as complete as possible.

So here is the list of the most memorable creatures of the 80s, 90s and the new millenium in chronological order

Let me say that The Thing is one of my favorite movies of all time, pure masterpiece from a genius of horror, John Carpenter. Besides being an interesting film, The Thing is also a true gore fest but don't let that steer you thin-skinned wussies away -- the gore is masterful, beautiful (reminding one of H.R Giger's work in Alien) and methodically placed. Carpenter isn't about shock. He's about pushing his audience to the limit of their imagination. He knows that violence is a medium that works better in some projects than others. One of the most interesting aspect of the film is its avant-garde tone and subliminal sense of dread. Ennio Morricone's subtle, electronic score envelopes images of a bleak winter as harried men lose their minds and question their own existence.
The surrealistic imagery conjured by Rob Bottin to depict the transformation of a human being into a shape-changing thing from another world is nearly unimaginable and the most original portrayal of a beast/monster i've ever seen 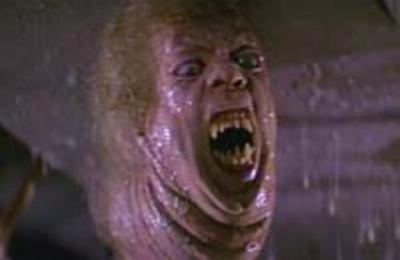 The story concerns a small town sheriff who must stop a rampaging alien warrior from killing the residents of Perry Hall. The movie follows the trail of a silver-tuxedo'd alien monster as he pollutes the colorful Baltimore 'burbs with: Tons of cheap gore, Laser guns and scream. Very cheezy movie, but everyone who likes Critters and late 70s/early 80s monsters from space movies, will love this one.

Three years after the disappearance of Sam Phillips, his young son Tony pines for daddy's return when mom Rachel takes up with another man. The fractured household is further upset when Sam mysteriously returns -and has a nasty habit of attacking local residents and seeping mysterious fluids from his wrist. Despite his father's menacing behavior, Tony continues to idolize him...even after he realizes dad might not even be human at all.
Not one of my favorite movies- I prefer the latter parts, but definetely a cult classic nowadays 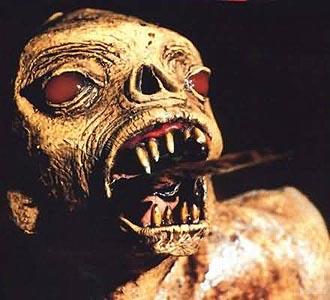 From acclaimed horror writer Clive Barker's Books of Blood comes a tale of devastating fright. Rawhead Rex is a demon, alive for millennia, trapped in the depths of hell, and waiting for release. He is held by an ancient seal, imprisoned for centuries in a barren field near the hamlet of Rathmore, Ireland. In time, this gruesome legacy has been forgotten, dismissed as an odd pre-Christian myth until Tom Garron decides to plow the field his ancestors knew better than to disturb. The seal is broken and an unspeakable evil is unleashedd - on a rampage of blood and lust.
From Clive Barker, who brought us Hellraiser, comes this great 80s horror movie. One scene that always stuck out was with a pregnant woman doing the dishes and as she glances out the window meets eye to eye with this 7ft demon. He than persues her into the house. Pretty scary stuff 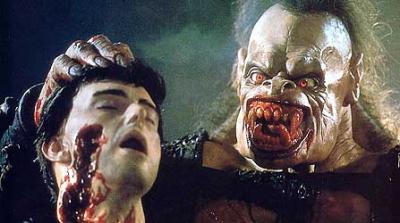 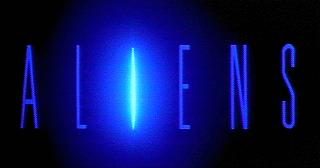 And here's another masterpiece. james Cameron never let me down, and Aliens is definetely one of the highlights of his movie work, and it helped to establish Cameron as a major action director.
Sigourney Weaver returns as Ripley, who awakens on Earth only to discover that she has been hibernating in space so long that everyone she knows is dead. Then she is talked into travelling (along with a squad of Marines) to a planet under assault by the same aliens that nearly killed her. Once she gets there, she finds a lost little girl who triggers her maternal instincts--and she discovers that the company has once again double-crossed her, in hopes of capturing one of the aliens to study as a military weapon. Directed and written by James Cameron, this is one of the most intensely exciting (not to mention intensely frightening) action films ever, with a large ensemble cast that includes Bill Paxton, Lance Henriksen, Paul Reiser, and Michael Biehn. Weaver defined the action woman in this film and walked away with an Oscar nomination for her trouble 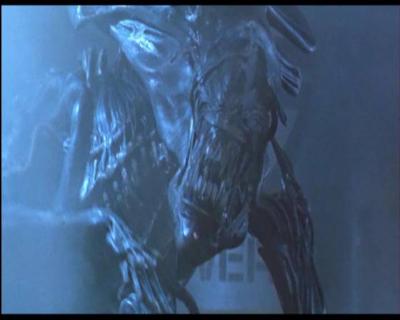 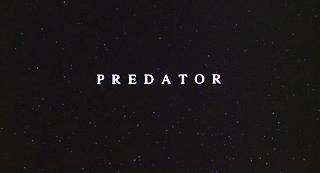 Dutch and his group of commandos are hired by the CIA to rescue downed airmen from guerillas in a Central American jungle. The mission goes well but as they return they find that something is hunting them. Nearly invisible, it blends in with the forest, taking trophies from the bodies of it's victims as it goes along. Occasionally seeing through it's eyes, the audience sees it is an intelligent alien hunter, hunting them for sport, killing them off one at a time.
Predator is definitely one of the best alien thrillers ever made. Predator is the classic action film. What makes it so unique is that the story starts off as a simple but exhilarating rescue mission; but then it suddenly switches gears and becomes a fight for survival for everyone involved. The genius of that! The cast is wonderful; Arnold as Dutch was very convincing and commanding, yet humbled and low-key in his performance. The only way you would know that he's the star is that his face is on the cover, he's the leader of the group, and he survives at the end. He was 'one of the crew' instead of a one-man wrecking machine like in so many of his other films; that was very nice to see. Carl Weathers turns in a good performance as Dillon, as does Bill Duke as Mac, Jesse Ventura as Blain and Sonny Landham as Billy. The whole cast worked very well together. 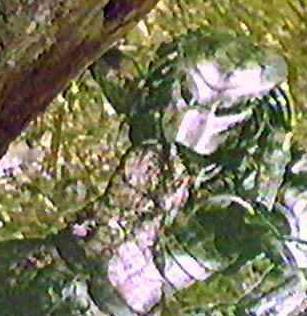 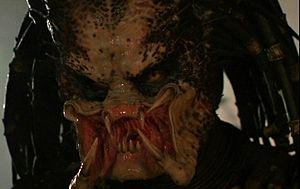 A group of city kids go into the country to relax. While there, one of them is involved in a biking accident that takes the life of the son of the local storekeeper. In a fit of rage, the storekeeper has a witch unleash an unstoppable demon called "Pumpkinhead" to kill the group. When he realizes he's gone too far, the storekeeper attempts to save the kids, but is continually afflicted by visions of peoples' deaths through the eyes of the monster. 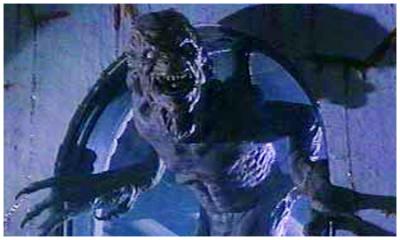 Featuring nonstop action, nerve-shattering suspense and awesome creaturesfrom the Oscar-winning special effects wizard Stan Winston who brought dinosaurs to life in Jurassic Park and The Lost World, this terrifying underwater adventure will scare you senseless! On the dark and forbidding ocean floor, the crew of a deep-sea mining rig discovers a sunken freighter that harbors a deadly secret: a genetic experiment gone horribly wrong. With a storm raging on the surface and no hope of rescue, the captain (Weller) and his team are propelled into a spine-tingling battle for survival against the ultimate foea hideous monster thatcannot die...and lives to kill!
Now, this is a winner. Leviathan, along with The Thing and Alien, are the most brilliant horror movies of all time. This movie is actually the same thing as The Thing - the only difference is that it all happens in the underwater base. Even the original poster of Leviathan is nearly identical as The Thing's poster. Great acting from Peter Weller and Richard Crenna, great music from no one other than Jerry Goldsmith and great special effects from Stan Winston, who designed Terminator, Alien Queen and T-Rex from Jurassic park, to name a few.

For comparison, here are posters from The Thing and Leviathan. Both movies are as similar as the posters. 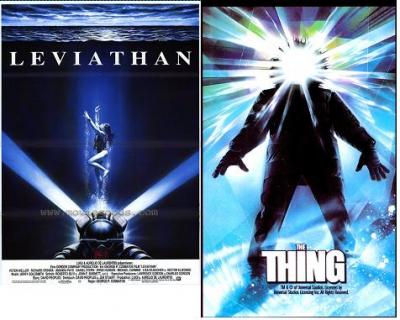 Rutger Hauer stars as a disgruntled cop after his dead partner's killer, who's a cannibal/alien. A simple sotryline/plot about a typical tough movie cop played by Rutger hauer, going after a murderer who police knows nothing about. The killer always rips his victims hearts and soon we learn that the Dna found on victims clearly says it is not humna... 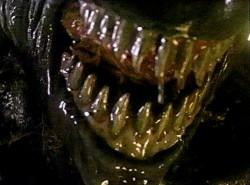 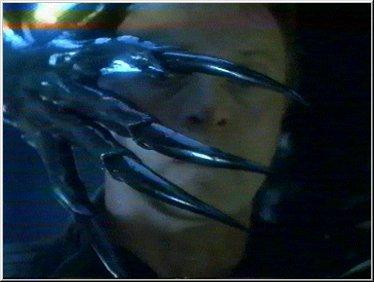 The nightmare isn't over, General Cain ordered The Hive to be reopened, and in doing so contaminated all of Raccoon City, a city of the dead, with Alice stuck right in the middle. Now, along with other surviors, Jill Valentine, Carlos Oliviera and his Captain, Nicholai, they must fight to survive, to escape the nightmare that has plaqed Raccoon City. But now there is a new threat: Matt Addison has fully mutated into a seemingly unstoppable creature, code named Nemesis, who will stop at nothing until everything around it is dead, but it also has another agenda...
It wasn't until Resident Evil 2: Apocalypse, that the theater came up with an interesting monster. Nemesis is the ultimate bad ass, which bonds the elements of the 80s monsters and modern villains/fighters. Doom heavily borrowed the ideas from Resident Evil movies, so it is not surprising that Doom resembles the Resident Evil series not only with the plot, but also with its monsters. Nonethless, i think Nemesis and the Doom creatures are the last interesting horror movie characters thus far 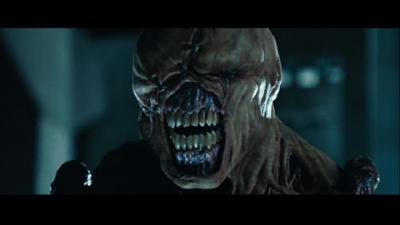