Greedy is waiting. Will you face him?
By invader
On
What makes Bosses so cool?

Is it their look? Their theme? Their voice? Or it may be all of those things put together. Whatever the case, Bosses are intimidating, but there's a difference between cool and memorable. Does anyone remember the bosses from the "Scooby Doo and the Cyber Chase" Game? Doubtful. But I'm positive that we remember the bosses from the "Metal Gear Solid" Series, "Mario" Series and "Crash Bandicoot" Series. Why do we remember them? Cause they made an impact on us, a thing that seperates the bland [Shogun Boss] from the fantastic [Psycho Mantis]. That's why I'm writing this, to tell you about the bosses that left a mark on me during my childhood. This is a series that I will be doing, so I hope you join me on this trip through Memory Lane. First up is a man that plans to, what else, take over everything. The only one standing in his way is a "superstar" of a hero... 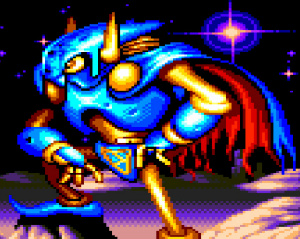 Man, that theme is awesome. Anyway, here we have Greedy, who kidnapped Ristar's Father, took over the minds of the planets' leaders in the Universe and plans on dominating while relaxing in his fortress. He's obviously a technical genius, considering all the robots he's created for his army. However, besides his brilliance with robotics, not much else is known about Greedy: Does he have a history with Ristar's Dad? Has he always been evil? Where did he come from? The answers to those questions are anyone's guess, but one thing is certain: his character design is fantastic. I know what some will think, "He's light blue and gold, that's a lame look!" and that may be their opinion, but I say he pulls it off very well. Oh, and any villain worth their salt wears a cape, and he is no exception.

Now, while we don't see him a lot except in the intro and final confrontation, his presence is felt throughout the game, considering all his mooks you face. While the final confrontation with him is challenging, it was originally going to be harder. There was going to be a level before the final one where you infiltrate his fortress and fight through the bowels of it to get to his throne room. For some reason however, this was scrapped from both the American and Japanese release. While tragic that we don't get to see more of his castle, his boss battle more than makes up for it. 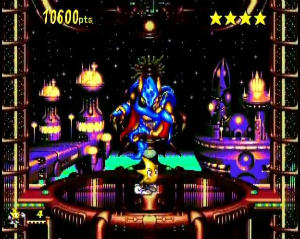 He will throw everything he's got at you: robot cannons and orbots, teleport while throwing lightning at you, and if you really become a problem he has the power to summon a black hole that will send you to everlasting darkness. Don't lose hope however, just score ten shots and his reign is over. He gets sucked into a black hole along with his minions and the day is saved. It seems he died, but the ending was only changed by the Americans.

In the Japanese ending, Greedy is seen with his army stuck on an asteroid, clearly signifying that this isn't the last of Kaiser Greedy. In the American, Ristar gets reunited with his dad and all is well. There never was a sequel to Ristar, despite the Japanese ending, so we'll never know if Greedy would've been victorious in Round Two. So, there was no sequel, but what I wouldn't mind seeing is a remake of it. With today's graphics and technology, it would be amazing. Look at it this way: Castle of Illusion got an HD Remake, why not this?

That's it for Greedy. Join me in my next article where I will be talking about a boss that seems to just Rezonate with energy...