#1 in a series about Wallace & Gromit
By Sabrina79
On
Plasticine Dreams, Volume 1: A Grand Day Out
By Sabrina Steyling

It's been two decades since the world was introduced to an absentminded inventor named Wallace and his clever canine companion, Gromit. In that time they've unwittingly found themselves involved in many crazy situations, all of which have touched the funny bones of people across the globe. To celebrate Wallace and Gromit and all of their wacky adventures, I'd like to introduce my new series called Plasticine Dreams - in honor of the material Wallace and Gromit are made of.

In this introductory volume we explore the duo's very first short film, A Grand Day Out. Released in 1990, the idea actually originated six years earlier when creator Nick Park was a student working on his graduation project at the National Film and Television School. The characters of Wallace and Gromit evolved from existing ones that Nick had already begun sketching and writing stories for; it was during a 3-week internship at Elstree Studios in London that Nick came up with the idea of a man building a rocket in his basement and flying to the moon to restock on cheese. Around this time Nick also met Peter Lord and David Sproxton, founders of Aardman Animation Studios. They offered Nick a job animating commercials in exchange for studio time plus additional supplies to finish his project. Nick accepted their offer, and by Christmas Eve A Grand Day Out was completed and broadcast on British television. 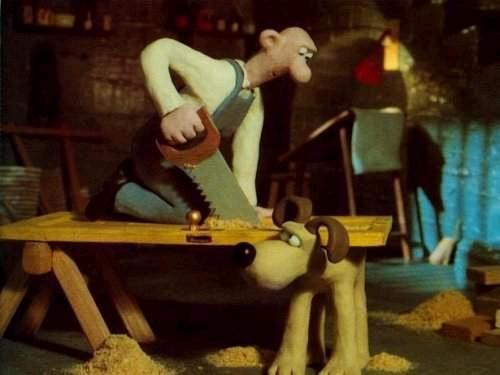 Building on Nick's original idea, A Grand Day Out tells the story of what happens to Wallace and Gromit when they decide to take a holiday to the moon after running out of cheese. Following a lot of sawing, drilling, hammering, painting, and soldering (my favorite part is when Gromit's drill gets jammed up and he goes flying), the two have built themselves an immense bright-orange rocket ship featuring a wallpapered interior with a massive control panel and a built-in toaster oven. Gromit mans the controls (good thing he's read Electronics For Dogs), while Wallace packs for the trip. It's not until they're both inside the rocket with the clock counting down and the fuse lit that Wallace realizes he's forgotten the crackers! He races back into the house and grabs several packages, making it back into the rocket with literally a second to spare. The basement begins to shudder and as Gromit releases the brake, a group of mice watching the proceedings don sunglasses to block out the light (this is one of my absolute favorite scenes!). 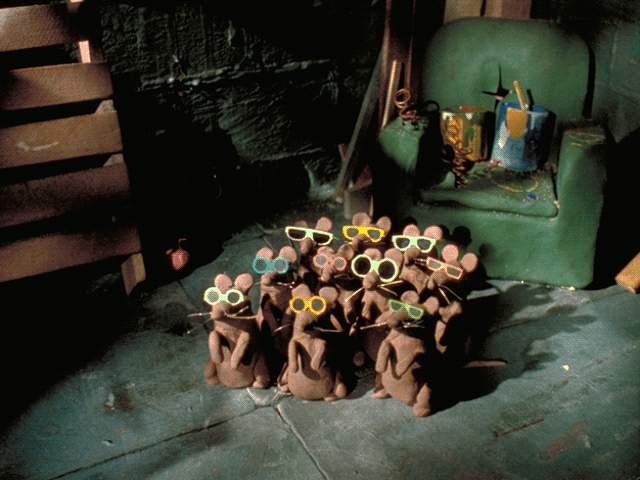 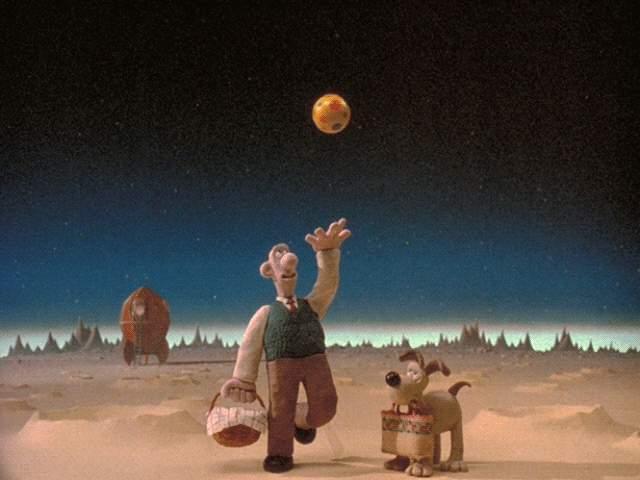 Following a relatively uneventful trip through space, the rocket reaches its destination. Stepping out of the rocket Wallace immediately demonstrates his lack of common sense as he kicks a ball into the air and is genuinely perplexed as to why it won't come down (And this guy's an inventor?!). Then the duo finds a spot and settles down for their picnic, enjoying some tea before Wallace cuts their very first slice of moon cheese. They each take a bite and confer. "Wensleydale?" Wallace asks. Gromit disagrees. "Stilton!" Gromit isn't convinced. Wallace is stumped. "I dunno, lad - it's like no cheese I've ever tasted!" 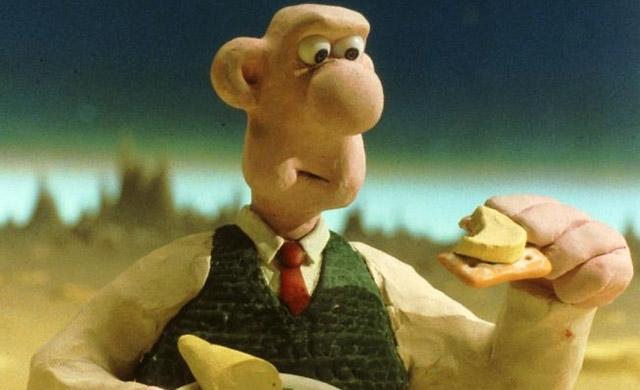 As they're walking toward another location, Wallace sees a disheveled pressure cooker (What?!). Wallace deposits a coin and yanks on the drawer but it's stuck. "Come on, stupid!" He smacks it and tries one of the knobs, which falls off. Wallace reattaches the knob and gives up, walking away with Gromit at his heels. Only after they've left does the pressure cooker come alive (I'd love to know whose idea this was): Two arms pop out of its sides, stretch, and adjust its antennae. Then the cooker takes out a telescope and surveys the area, shocked to see the picnic things lying nearby. The cooker confiscates some items as evidence, getting temporarily sidetracked by a ski magazine into a daydream of its own holiday. When the cooker notices the rocket, it takes out a pad of paper and proceeds to give Wallace and Gromit a parking ticket! Another peek through the telescope reveals that Wallace and Gromit have settled in another spot and are enjoying more moon cheese, which makes the cooker angry so it takes out its billy club. A dozing Gromit sees the cooker sneaking up behind Wallace and cringes as the billy club is raised, but the coin deposit expires before the cooker can actually hit Wallace. Of course then he stands up, whacking his head on the club. Calmly Wallace takes the club, slips another coin into the coin slot, and once again the duo walks away. The cooker is now even angrier than before. It sees Wallace and Gromit boarding their rocket and remembers the skiing magazine, which turns its anger into a desire to tag along home with them! Of course, when Wallace sees the cooker coming at them, he and Gromit hurry inside the rocket and prepare for liftoff. The cooker tries to climb the ladder but its wheels prevent it, so it cuts a hole in the side of the rocket with a can opener and climbs inside. Wallace then realizes that they've forgotten to light the fuse, but it doesn't matter because the cooker lights a match and KA-BOOM! Problem solved! Unfortunately the cooker gets thrown from the rocket, leaving it pitifully holding two scraps of metal from the rocket in its fists. Luckily, the cooker comes up with a brilliant idea, and soon it has fashioned itself its own pair of skis from the scraps. It pauses briefly to wave goodbye to Wallace and Gromit as it happily makes its way along the cheesy hills of the moon. 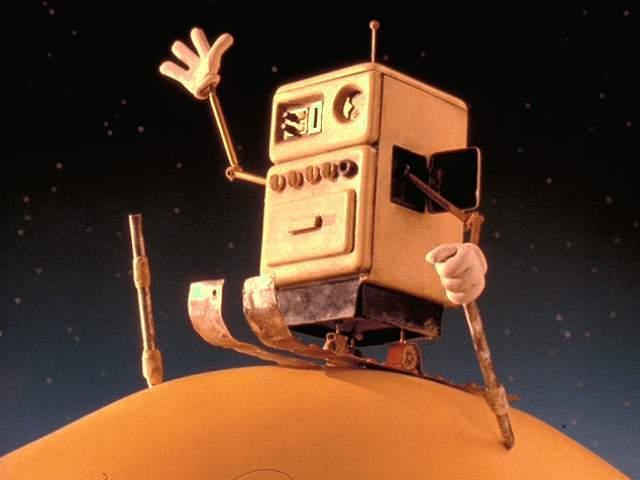 In the end, it was a win-win situation: Wallace able to get an ample supply of cheese for his fridge, and the pressure cooker's dream of a skiing holiday still managed to come true!

Be sure to tune in next time for the second installment of Plasticine Dreams where we try on Wallace and Gromit's second adventure, The Wrong Trousers!
9
Login To Vote!
More Articles From Sabrina79 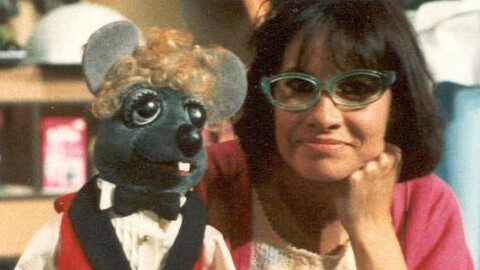 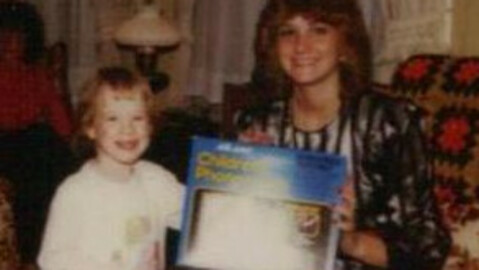