Big Animorphs Fan? Then Read This
By sanguanet_vibrella
On
* NOTE: THIS WAS DONE A FEW MONTHS AGO & POSTED ON MY MYSPACE BLOG*

RETRO BOOK REVIEW: VEGEMORPHS, THE FUNGUS AMONG US

It's official, I've decided to start doing my own personal articles about my childhood since my MYSPACE blog has been collecting a heck of a lot of dust.

Our childhood is what shapes us, molds us & basically turns us into upstanding citizens ready to face the world with a fresh perspective, but then again maybe that's taking it a TAD too far.

But in any case a childhood is as important to the development to child as milk is to building strong bones.

Today I'm doing a book review or rather a SUPER AWESOME FABULISTIC EXCELANTAY RETRO BOOK REVIEW of Vegemorphs: The Fungus Among Us.

Let me start off by saying that this book was produced mainly to cut into Scholastic's massive profits on the now legendary Animorphs series by K.A. Applegate & if you don't know what Animorphs is, I can't help you.

Do a search on it on Wikapedia or something.

It is SUPPOSEDLY written by a Mr. or Mrs. Leif E. Green ( fake laughter) which might turn the causal reader or super hardcore Animorphs fan quickly off to this book.

It is also published by Troll, who I think does all those Book Fair Pamplet Deals which is how I stumbled upon this book in yay of '98.

The book begins with a mock Animorphs opening with the whole " Oh hi I'm Jake, I can't tell you my last name or where I live, or what state I'm in because the Controlers are watching us. Boo-Hoo, Tobias is a falcon & he can never turn back into a human."

If you've read Animorphs before, you know excatly what I'm talking about, if you haven't I'm sorry if I ruined it for you.

The book is narrated by one of the kids, which is once again standard Animorphs fair, named Kyle or Kale as his code name suggests.

He's the leader of the Vegemorphs & a bit of a blabber mouth, which isn't a good thing considering that he's got a bunch bad guys on his tail like a guy who just stole 500 Big Macs from his local Micky D's without paying.

He makes it clear early on that he is indeed a geek which might help with his whole secret identiy crisis, if no one knows him, his secret is safe.

He has a few pals, just like Jake in Animorphs, who go by the code names of Carrot (CARY), Tomato (TOMMY), Radish (RANDI) & Olive (Olivia, Kyle's secret crush) & the presitgious Prince Brassica, whom we encounter latter on.

It starts with the gang hanging out at a bingo parlor thats inside a local mall with a bunch of old ladies, which is done mostly so a bunch of bullies won't throw apple cores at them.

And like how hanging out a bingo parlor is going to help your social status Kyle?

The bingo parlor in question is owned by a local farmer by the name of Withers whom Kyle's brother Bryce works for.

Withers is a bit of a stud when it comes to the gals so he basically created the bingo parlor to give the old hags something to do besides asking him for marriage proposals.

Funny thing about that bingo parlor though, you never win anything according to Kyle & what's the use in playing bingo if you aren't going to get some cheapo toy from Asia that might cause Lead Posioning?

It's starts getting late & the gang desides to leave by taking the short cut through farmer Withers' field. BAD IDEA

Kyle then goes into detail , as they walk through the field, about each person individually so the reader can get a sense of what they can bring to the table.

Randi- Into fashion. Has been given offers to model, which she turned down & is a deep thinker like Cary.

Olivia- Latino & gorgeous. Kyle's ideal woman. She fancys herself some plants. Her parents own a local green house where Olivia spends a lot of time talking to plants which might be something to see a shrink about.

Kyle doesn't really go into detail about Tommy though for some reason. Maybe Mr. Green thought that Tommy was so Awsomely Hip that he needed no introduction, or maybe Mr. Green got lazy or maybe he just forgot about Tommy. Making Tommy.................AN UNSOLVED MYSTERY. ( Creepy Music Plays)

Anywho Cary spies something but the others don't until it gets closer. It's a giantic flying mushroom that's headed straight for them.

" It's a Portabello Mushroom," Olivia explains in correction, " They make very good appetizers."

When the ship finally lands, after releasing some spores , the gang feels cleansed after all the coughing & wheeze. Until suddenly, up behind them appears..........a bunch of Broccoli? CORRECTION ALIEN BROCCOLI , theres a difference.

But don't worry, they're good. Though the 8 year old veggi hater might think that they're double crossers.

I wasn't born a veggi hater, I love veggis, except asparigus, brussel sprouts & coleslaw, though I did like it when I was younger.

The leader of the Alien Broccoli goes by the full name of Prince Brassica Oleracea Italica Cruciferae but he tells our heroes just to call him Prince Brassica, THANK GOD!

But the gang is still meserized by the fact that he's a talking stalk of broccoli.

But as Prince Brassica explains, " There are vegetables, then there are VEGETABLES. It's like comparing a doll or a department-store mannequin with a human being. they may look a lot alike, but they aren't the same."

" How can we tell the difference."Cary asks.

Prince Brassica goes on to explain that theres no right way to tell. The people of his kingdom, THE VEGETABLE KINGDOM, don't try to communicate with normal humans, but our heroes are about to be made unique enough to do so.
He also says that the people of the Veggi Kingdom live beneath the surface of farmer Whiters' because of the JERKKS.

With one simple touch, they can melt the people of the vegetable kingdom to a goopey blob & infect humans with all sorts of fugus related alliments like althete's foot.

Needless to say the gang is rather grossed out to say the least. But then Prince Brassica tells them of a magic liquid that can turn them into the much needed fighting force........SALAD DRESSING.

I kid you not!

Once Kyle is forced to retrive it from Prince Brassica's quarters, the gang is dosed in a mist of cool dressing, thus altering their genetic coding.

They now have the power to change into vegetables & fight the JERRKS with the power of vitamins & minerals. They can also make others turn into veggis too, but they have to talk about the most boring thing they can think of to get them to change.

But Prince Brassica warns them not remain a vegetable past the recomended cooking time.

And you know what happens when you go over the recommended cooking time don't you?

Which isn't good if you have a rabbit as a pet in your home.

Just as Brassica is disclosing vital info, the slave fungi, brainless lackies of FUN GUS, arrive out of the big flying portabello mushroom.

They can't hear & they can't see, but they can smell sweat better than anything.

They even crave it even.

It's what starts the infestation.

Then come the Trichopyton, which are also slave fungi as well. They cause little trouble, but if you get on their bad side, they'll multiply & attack & give you a horrible case of athlete's foot.

But these ones are mutated & can cause WAY more damage.

Trichopyton have been enslaved by Rubrum fungi which have also drastically mutated.

Then comes the grand finish, Fun Gus himself.

He waltzs off the platform with prestien grace & fluidity, if you can call it that.

Like I said before, he looks exactly like Prince Brassica, but taller, WAY TALLER & also dressed in a bad outfit.


After a disgusting belch, Fun Gus approaches Brassica & the gang does their best to hide so they don't get caught & mutilated by these strange beings.

Being the little wiener that he is, Brassica asks Fun Gus why he's being such a big bully.

Fun Gus chortles at their innocence, but informs them all that he is quite aware of all the revitialization they have done on previous planets that he has conquered.

Then he takes a swig of his celery tonic & morphs into a huge green blob as a horrid stench fills the air.

The Trichopyton begin their attack on Brassica's men & soon enough on Brassica himself.

In pain, Brassica tells Fun Gus that his day will come, when all the fungi will be conquered.

Then Brassica crawls into a hole in Farmer Whithers' field, maybe to die.

Not able to take anymore, our heroes take the risk & run for it.

But the fungus are faster.

But then Kyle sees something in the corner.

Something that's starring back at him dead on.

Will Kyle get out alive ? Will pigs actually fly ? Will you continue to care? & what of poor Prince Brassica?

All these questions & more will be anwsered shortly in part 2 of my Vegemorphs review. 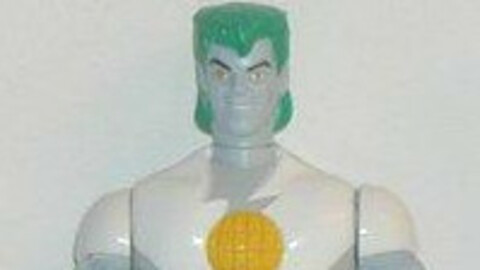 4
Quote O' Matic
Mort: "Well, at least I didn't get robbed. And what can I do for you two fine black men today?"
Added By: funguy10
Family Guy