Dark City vs The Matrix

Dark City came out a year before The Matrix, and had a very similar plotline.*spoilers*
By takineko
On
I remember watching the Matrix for the first time and thinking to myself, “I’ve seen this movie.. This is Dark City all over again!”. The movies were only a year apart but somehow, few people remember Dark City, and the Matrix had a lot of hype from the get-go. I watched Dark City for the first time in a long while, and came to the same conclusion as I had so long ago. Although the Matrix had far more special effects crammed into its two hour Trilogy starter, and stars Keanu Reeves, Dark City still wins me over as the better of the two. The similarities between these films are uncanny, I doubt anyone who’s seen both movies would have been oblivious to this. 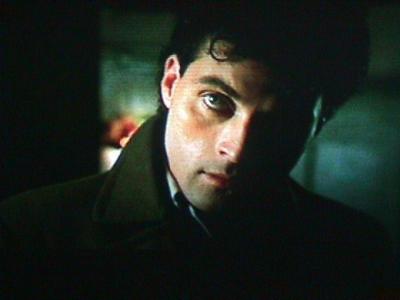 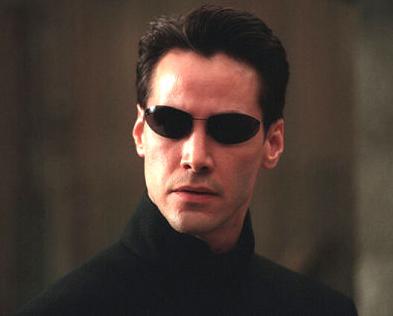 John Murdoch is something of a Neo character, however played by an arguably better actor. Both characters are discovering their world is not real, and have “awakened“ quite literally from this world. John's world is fabricated by the "strangers" (aliens) who walk around the city without really being noticed, save for their pasty skin, bald heads, and identical outfits. (They resemble the bad guy from “Who Framed Rodger Rabbit” in my eyes). Neo's world is fabricated by the AI androids/programs who can walk around the city without being noticed, save for their similar appearance, hair dos, and identical outfits. 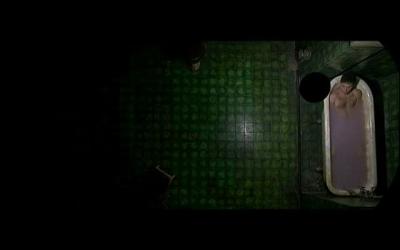 The “strangers” have strange names like Mister Book, Mister Sleep, Mister Hand, and Mister Wall. The Agents, or programs, have simple last names like Agent Smith, Agent Jones, and Agent Brown. Though they don’t seem to have first names. The “strangers” have a collective memory (Borgs without implants?), but for some reason speak to each other plainly. The Agents all have combined information and can communicate through their ear pieces. 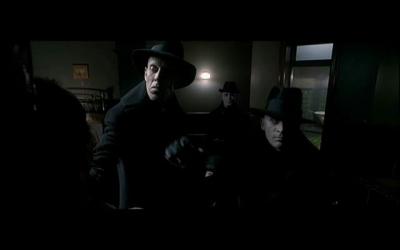 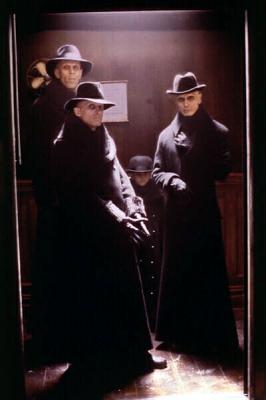 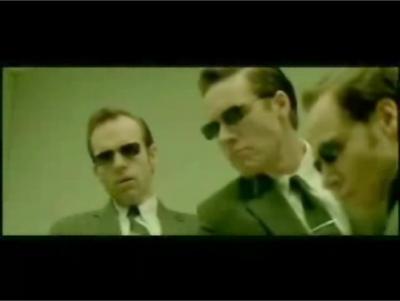 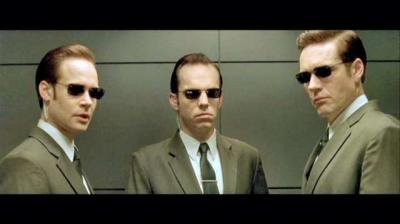 John develops the ability to Kyun (SP?), where he can manipulate reality at will just like the strangers. The “strangers” somehow use a machine when Kyuning, to help them re-arrange the city, but I’m pretty sure the machine just supplies them with the raw material to manipulate and make things out of. Neo has the ability to change and control the Matrix almost just like the agents. I say almost because I’ve never seen him take over someone’s body like they do.

The “strangers” need to use the humans to survive. They are a dying race and somehow dead humans make excellent vessels for them--Which explains their pasty appearance. But for some reason, they need to figure out what the human soul is for themselves. They want to share our soul, but this isn’t exactly explained, maybe they think it will make them live forever? The “strangers” keep the humans in Dark City to experiment on them. Dark City is a rusty labyrinth of old style almost metallic buildings set against a sunless sky. I don’t even think there are any stars shining either, probably due to light pollution. (Dark City has a very Tim Burton’s “Batman” feel to it).The people in this city are unaware that there is no daylight, because every 24 hours they are put to sleep and injected with different memories, personalities, and lives. The buildings are changed and transformed during this time in an effort for the “strangers” to study what makes a person an individual. Where is the human soul? Are humans just the sum of their memories? 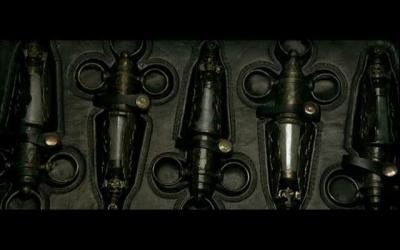 Doctor Schreber mixes and matches various collected memories and puts them in syringes. 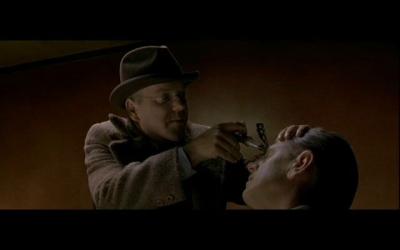 Schreber even administers the injections as everyone is asleep. 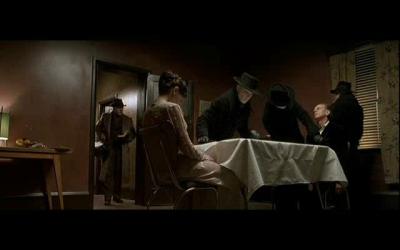 The Strangers themselves organize things in the new homes as the building structures reform around them.

In the Matrix, the androids, sentinels and robots need to use humans to survive. They need an energy source, and somehow human life energy is just perfect for them. They keep the humans in the Matrix so that they will live out their lives unaware while putting off this energy. The Matrix is designed to be like earth long before AI was invented. There is happiness, sadness, death and life, and all the complex things there should be. It’s designed to be so real you can’t even suspect you’re sleeping, so you can’t fight the oppression of the AI. 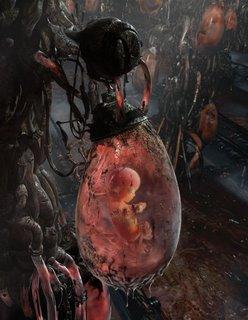 I wonder what happens if a woman gets an abortion, I mean the baby isn’t even inside her. 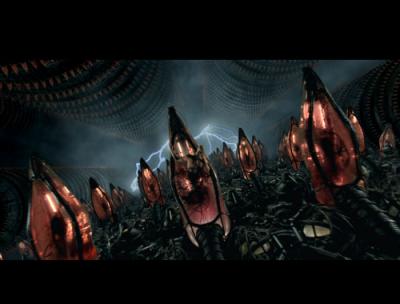 These people think they're stuck in traffic.. close enough. 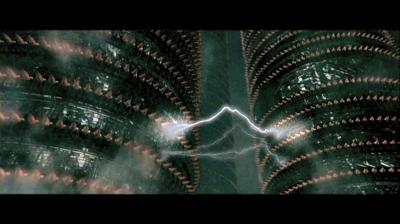 I'm no expert, but I think the lightning is purposeful.

In the Matrix trilogy, Agent Smith tries to consume Neo, and later takes over a human body in order to hunt him down. Becoming somewhat more human himself, but no less evil and freaky. In Dark City, Mister Wall is injected with Murdoch’s memories in hopes of being able to hunt him down. But seeing as how Murdoch didn’t receive all of those memories, and he isn’t the person they were going to create him as, its not so helpful. But it does make Mister Wall a psycho who enjoys killing hookers. 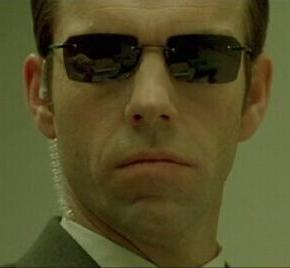 Agent Smith wonders why you won't be shot.

Mister Hand wonders why you wont sleep.
At the end of Dark City, John Murdoch has a showdown with the “strangers“, the head “stranger” in particular-- while flying in the sky with buildings exploding and debris flying all over. In the last film of The Matrix trilogy, Neo has a showdown with Agent smith, among many of him, flying in the sky as it rains.

Strangers attempt to inject Murdoch with themselves to share his soul-- instead the Doctor injects him with a life long lesson on how to Kyu as well as the strangers. Showdown time. 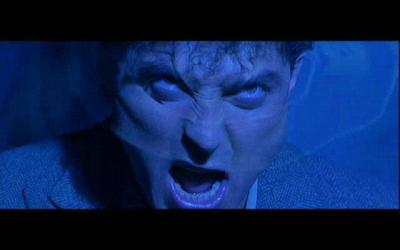 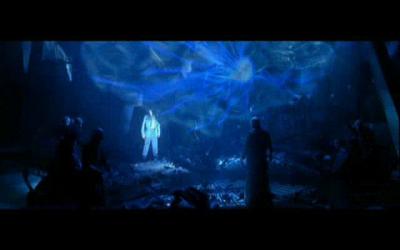 Showdown against Mister Book, leader of the Strangers 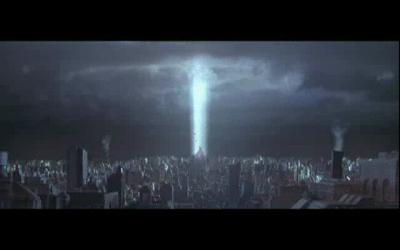 Murdoch manages to knock around many Strangers, but the Kyuning fight between he and Mister Book causes the ground above to open up and debris is flying everywhere. 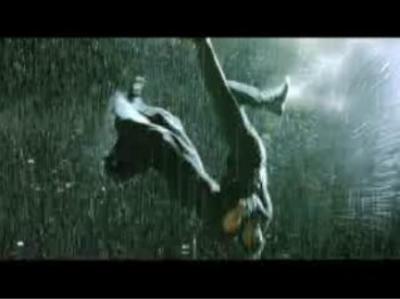 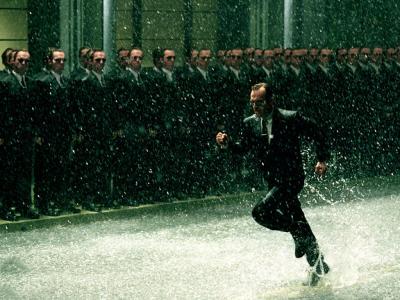 I wonder why Smith decided to take him on one at a time.. what’s the point of having zillions of you? 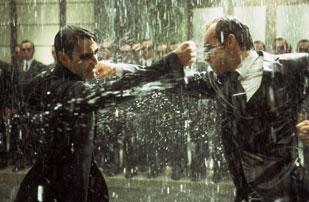 On a random note, anyone else find this scene to be Dragon Ball Z esque?

The battle is more similar than the images suggest, I found it difficult to find images of Murdoch's showdown with Mister Book in the sky. But take my word for it, it's similar.

Why Dark City is superior

Kyuning is much cooler than anything Neo has done with his abilities to change the Matrix. Murdoch can create buildings, an ocean, the sun and sky, from just his will. And Murdoch’s world is real, it isn’t a program, so he is using this ability on an actual plain. Then again, some people just plain love martial arts, so maybe Neo is for you. 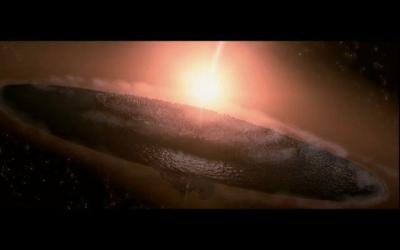 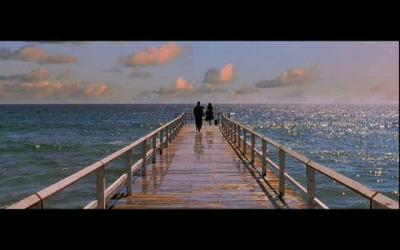 Murdoch’s implanted history was to be a murderer, Neo never has to deal with anything from his past, or deal with his loved ones or say--- Morpheus thinking he's a psycho killer of some kind. Plus the idea that your history is all fabricated in your head, is quite different then, oh I’ve been playing in a virtual world all this time. In the Matrix, your memories are still yours, you are still you, just the things around you were all fake. Murdoch struggles with the idea that he might be a killer, crazy, and he doesn’t have a group of rebels to help him. The closest thing he has to Morpheous, is a Doctor who the “Strangers” use to fabricate memories, and Walenski-- a cop who went off his rocker because he woke up a while back and realized everyone keeps getting changed around, but he can’t find a way out of the city so he steps in front of a train. Not exactly the wise man offering a trip down the rabbit hole for further enlightenment. 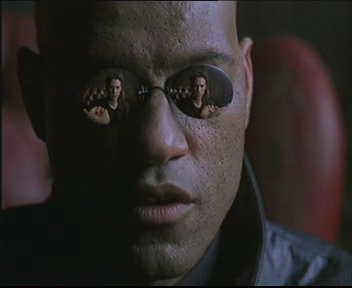 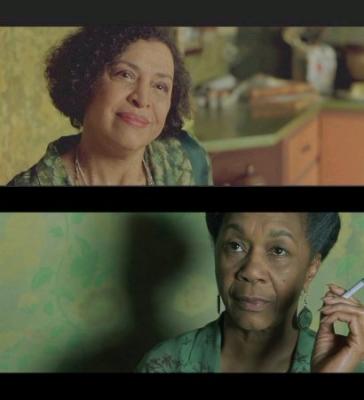 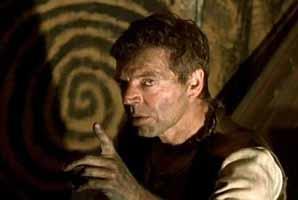 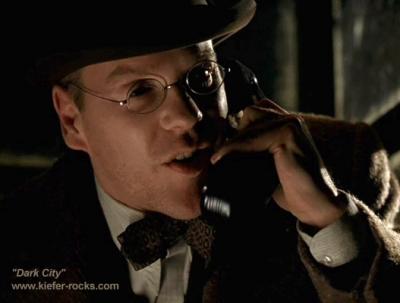 There is no real world to escape to for Murdoch. Not even a Sodom and Gomorrah, dirty dancing underground hang out with many people to help in the rebellion. He's got no where else to go, no time to sit and think things out, he's always on the run from cops and loved ones thinking he's a murderer and “strangers” trying to kill him.

Neo dies at the end. The AI are taken care of, and now the rebels face the struggle of making the world hospitable with all of the freed people who were used to having a normal life. Murdoch takes out the “strangers“, recreates Dark City, as he see's fit-- fixes things. Makes his own paradise for everyone there. Oh yeah, did I mention he lives? (Its not that I’m so anti Matrix or anything I loved the first one, but the rest.. "eh")

Overall I found the idea that your life long memories are actually brand new, intriguing. And the fact that structures you knew your whole life, actually just popped out of the ground hours ago. I like the thought that you can over come who you were in the past life they implanted you with. That just because you were abused as a kid, or killed someone, doesn’t mean you’re going to keep doing it, doesn’t mean you are that person.

I'm sure after seeing both movies, there will still be many who prefer The Matrix, but Dark City to me, will always be deeper, darker, and more uniquely written. I even enjoy the characters more. Neo becomes more and more aware of how powerful he can be, but as Murdoch comes to grips with his abilities and his world, his performance just seems so much more believable. Neo didn't wander around the Matrix learning for himself it wasn't real (which would have been awesome), and Murdoch never learns Kung Fu, but I think in the end he came out of it with much more. A better story.
6
Login To Vote!
More Articles From takineko