Remember the REAL Sabrina, apparently we do!
By Fangarius
On
Responding to Celeste's Why Do I Have to Sit Through This?, this new RetroJunk Fangarian Perspective begins with something which classic remakes keep sorely forgetting in their creation: If it ain't broke, DON'T fix it!

Case in point with my first article, Sabrina the Teen-Age Witch. Usually nowadays when you hear about this character you usually envision Melissa Joan Hart, or perhaps the slightly-bemusing, but disappointing cartoon, DIC Productions put out.

But before getting into comparisons, devolving this into another new vs. classic article, why don't we instead go a little deeper into Sabrina's past on how she came to be, and what perhaps went from greatness into something less-than-great with the series. 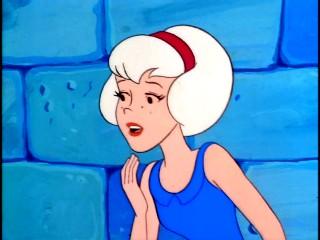 Originating from Archie Comics, Sabrina first began as a one-shot character in Archie's MadHouse Comics, which (if you didn't guess from the title) was their answer to Gaines' Mad Comics. 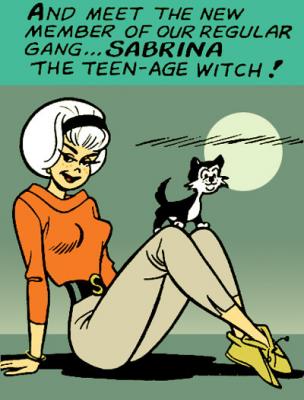 Basically the story behind Sabrina sounded almost as a modernized version of how witches behaved in the 20th Century. Here, you notice Sabrina lacks having her Aunts, Hilda and Zelda, but does have Salem. Here, you note, Salem is just Sabrina's familiar and not an articulate cat. 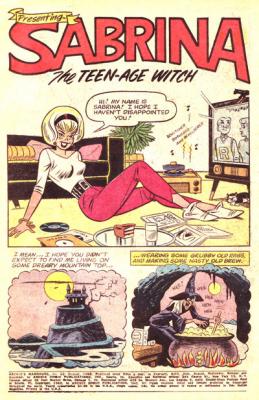 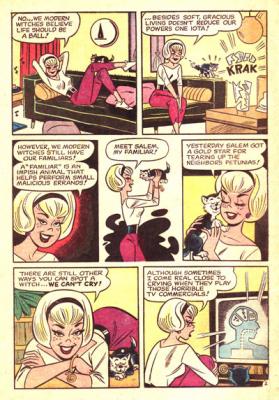 Because Sabrina was a one-shot character, you note Dan DeCarlo utilized classic mythos about witches for her. For instance, Sabrina admits witches can't cry (though later this was thrown out in future issues), nor can they fall in love (Law of Aphrodite), lest they lose their powers.

As time marched on, with shows like Night Gallery and DC's House of Mystery gaining popularity, Archie Comics subtly changed the format of Madhouse Comics where Sabrina became sort of a Rod Serling or Elvira to haunted tales, which introduced Aunt Hilda, Zelda and the rest of her family (though in name only here).

And just like the Mistress of the Dark herself, sometimes Sabrina found herself within these tales of intrigue and mystery.

Also Sabrina would come and visit the Madhouse Monsters.

(Little Side note: Hal Sutherland claimed it was the Madhouse Monsters which were the inspiration for the Groovie Ghoolies, thus explaining why Sabrina usually cameoed in their series, and they sometimes crossed over to her show.)

Eventually getting her own stories in Archie's TV Laugh-Out 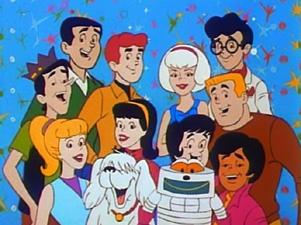 , Sabrina not only ended up getting her own comic in 1971, but Filmation decided on giving the Teenage Witch her own animated series.

Now about that time, Archie Comics had to reinvent Sabrina's character slightly because due to the Comics Code Authority, they realized Sabrina being a horror-comic icon wasn't going to cut it.

Instead the writers decided on creating a new world for Sabrina which was sort of a split between two other exist Witchly series out there.

The revamped Sabrina possessed two characteristics: one, naturally (or supernaturally, as the case may be) was from Bewitched. 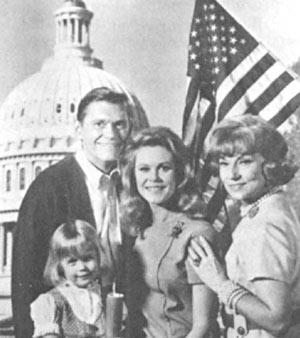 Mainly because, as we know from the modern version of Sabrina, basically she couldn't reveal herself as a witch to others. Although the oddity here was Hilda and Zelda were decked in their witchly attire, cooked with cauldrons and their house was a bit like something from The Munsters, nobody really noticed.

The other gimmick here with Sabrina was, she had become a Teen Age version of another classic witch, Wendy, the Good Little Witch. 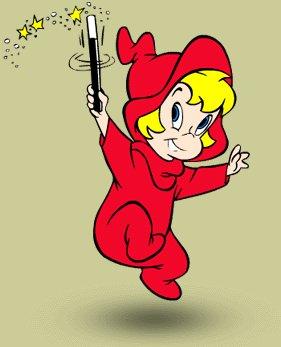 Now before you gag and turn away from this article, let me explain.

Apparently in the Seventies, teenagers, whether they had powers or not, were always going against the tried and true. In Sabrina's case, as with Wendy, she never fancied using her powers for wickedness, but instead--much to Hilda and Zelda's chagrin--she preferred secretly helping others. Naturally, this behaviour got poor Sabrina flack from Della, the Head Witch as well as the Witches' Council and Mystic Spirits, who wanted Sabrina to act more witchly than teen agerly.

Now at this point, I want to make it clear, Sabrina's family never officially had a last name. There's always been arguments about the name 'Spellman' being an Archie Comics creation or the sitcom/film's denotation. Also, Della was originally the Head Witch, whereas as with Bewitched, the Witches' Council was usually heard and NOT seen. In fact, usually it was Della who called the shots.

But let's explore the aunts. 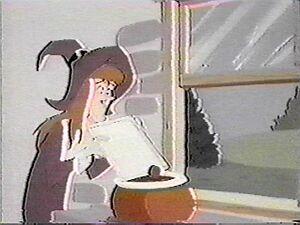 Aunt Hilda's personality reminded me of Granny from The Beverly Hillbillies. She was always the fiesty one, and was practically the head of the household. Basically she knew more about witches and their worlds, and isn't particularly fond of Harvey, Sabrina's mortal boyfriend (sort of like how Endora feels about Darrin) nor Sabrina performing 'good deeds' with her witchcraft.

Hilda was always getting into trouble through one way or another, either with her bold attitude or her mischievous nature. Ironically it was usually Sabrina who had to show her the error of Hilda's ways. Either that, or Hilda had to learn the hard way.

For instance(in the comic), Hilda discovers through mortal's complacent use of machines, she can extort them by magically reversing the dials and machines back. Sabrina, who feels Hilda shouldn't be doing that, gives her a taste of her own medicine by reversing the clock making it yesterday. Thus eliminating the 5-pound roast Hilda conned out of butcher earlier.

Ironically what balanced out Hilda's personality was that of Sabrina's Aunt Zelda. 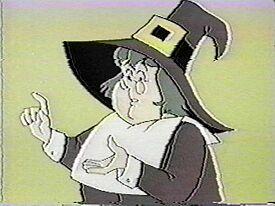 Unlike the sitcom, Zelda was more like Aunt Clara. Usually, she'd help Sabrina out behind Hilda's back, with disastrous results. And she didn't mind Harvey as Hilda did. In fact, in one episode Zelda uncharacteristically faces off with Hilda when her sister decides on ruining Sabrina's date with Harvey, after their niece blows off a sacred outing with her aunts.

Zelda was also the brewmaker of the family, always making potions and concoctions which never worked right, but in the end getting the same result afterwards. 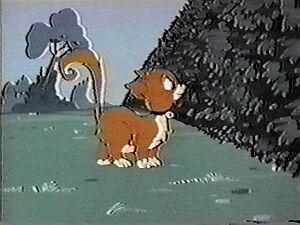 In the original series, Salem was Sabrina's familiar. But he wasn't a warlock transformed into a cat, but just a magical cat. Here, however, he was an orange tabby short-hair as opposed to the black cat we know of today. Though Salem never talked, he could perform magic much to Hot Dog and the local canines' chagrin.
Cousin Ambrose rounded out the family (regrettably I couldn't locate a pic for him, sorry). He was sort of the on-again/off-again relation, but with an inventive streak. Basically he dealt with suping up brooms, trying new ways for using brew (once even attempted using it as a gas substitute, long before the Weasleys had their flying car!) and just there to help Sabrina out whenever Hilda and Della kept ragging on his niece for not acting like a proper 'witch.'

Now for awhile, the series kept this formula going, which I liked because it also had Archie and the gang in it as well, and you had wonder why no one acknowledged the strange goings on whenever Sabrina was around.

But as with all good things, Sabrina's formula started becoming a bit on the cliched side, and it wasn't until an Archie Comics writer and artist altered Sabrina's format once again.

Bob Bolling, who was better known for penning and illustrating the Little Archie adventures, began heading the reigns for the Sabrina series.

But here, he dropped the typical 'Wendy' genre, for something a bit more adventurous. Instead, Della had become a Paranormal Crusader for the universe than its tormentor. (Apparently Sabrina's modernized attitudes had gotten through to her and the Council.) 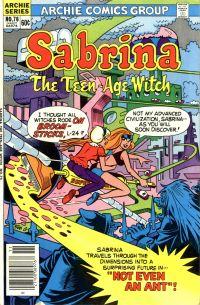 Here Sabrina went on fantastic adventures, usually dealing with conservation (going into the Future, discovering all nature has literally gone extinct), or with mad scientists (Prof. Pither) wanting to take over the world.

Though the format made Sabrina far more interesting than before, the series flopped and ended in 1983. Although Archie Comics reprinted her adventures in digests, anthologies and other collaborations, Sabrina remained pretty much in limbo until 1996, when Showtime decided on producing a film with Melissa Joan Hart about the character.

Naturally, afterwards, ABC picked up the sitcom which followed. 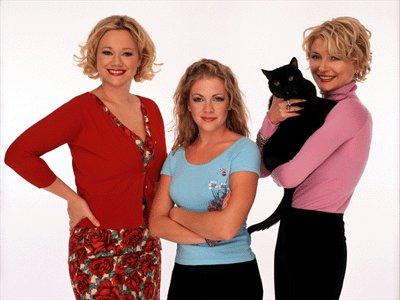 In all honestly, I never had qualms with the Melissa Joan Hart version because the sitcom did cast Caroline Rhea as Hilda, who did a bang up job of the character, because it was a bit closer to what the original Hilda was like.

Zelda being a bit more intelligent was allowable. And overall, it kept up with what the original series intended for Sabrina, leaning more towards the Bewitched formula over the Wendy one.

(Bit of trivia here: Alice Ghostley, who was Esmeralda on 'Bewitched,' also played as Sabrina's great-grandmother on an episode.)

Anyway, the series was such a hit, DIC Enterprises announced they were going to do an animated series, and Archie Comics revived the comic, giving Sabrina a new look for the Ninties as well as her sitcom. 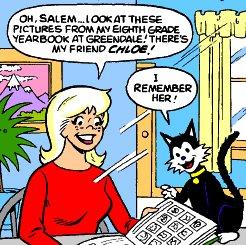 Consequently, many of us true Sabrina fans thought, 'Wow, they're going to bring back the classic Sabrina on television which we knew from the Seventies, but with a modern touch.'

But instead of getting this, or a reasonable facsimile: 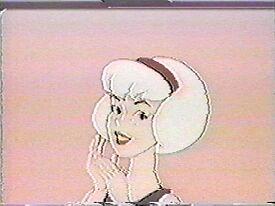 We ended up getting this: 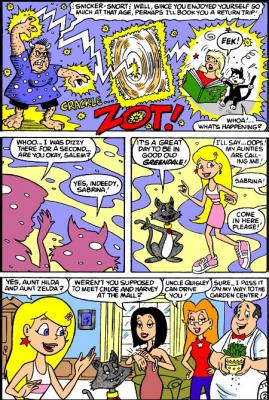 And although Archie Comics attempted explaining the reason for this (and angered she-troll's revenge), it wasn't exactly the Sabrina we were hoping for. Now my theory about this was, perhaps they feared ABC might've caused some flak if they had gone the 'animated sitcom' route. Or perhaps Caroline Rhea and Beth Broderick just didn't want to lend their voices to the project.

Whatever the case was, just as with the 'new' George of the Jungle or Shaggy and Scooby-Doo, Sabrina the Animated Series was anything but the true Sabrina.

At the time as well, I also blame the whole kiddification stint which begat in the late-80s, when Jim Henson spawned forth The Muppet Babies and everyone attempted cashing in on the craze. Because what may work for some, doesn't necessarily work for others.

In fact, I wouldn't have minded an animated series where Sabrina ends up in the Other Realm, where her and other relations have adventures which the series only touched upon. To me, that would've been a better animated series than having poor Sabrina de-aged to her middle-school years and stuck with her adolescent aunts and 'Uncle Quigley.'

Fortunately, before the Manga Sabrina hit, Archie Comics neatly wrote out Uncle Quigley, and had Enchantra save Sabrina from her badly animated fate. Regrettably, this didn't stop Sabrina from going manga, but at least her manga adventures possesses a Bob Bolling genre to it rather than doing something goofy, like having Sabrina fight Mecha or dealing with a cursed, gender-changing teen.

Personally, I guess it depends on your own personal taste and perspective. As for me, I'm going to check out some of the Classic Sabrina on YouTube, as well as awating the DVD collection coming out in April.

Until then, guys, hope to see you soon on another Fangarian Perspective.
23
Login To Vote!