A look at the film's evolution
By Keiichi77
On 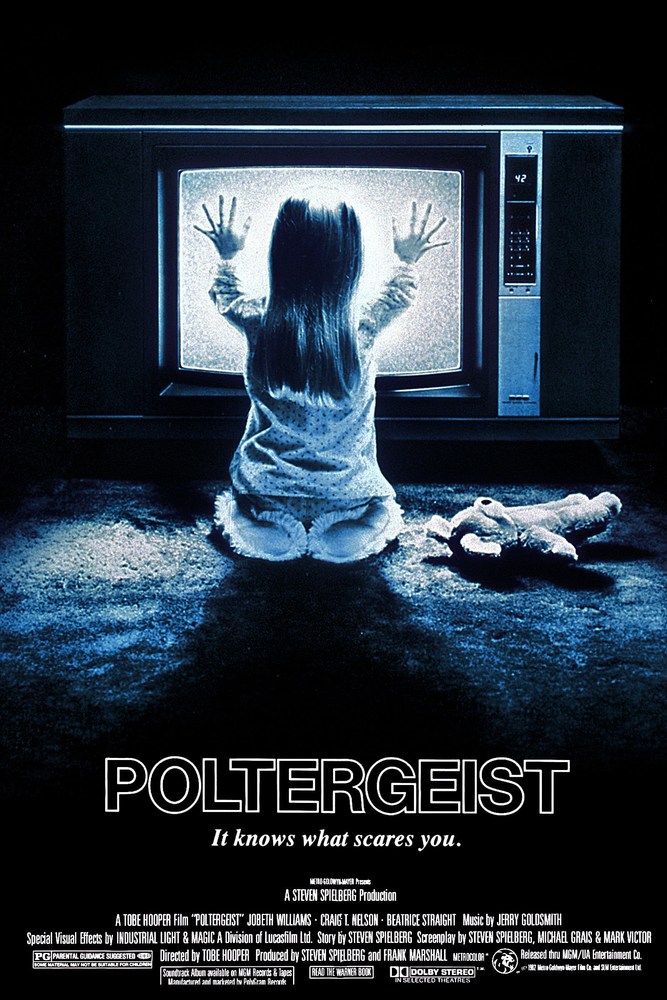 Similar to when I looked back at the original script of Gremlins, I thought I would look back at another retro movie important to my childhood. One thing you should know about me is that I am a huge fan of 1982's Poltergeist. It's probably my favorite horror film, although a lot of that has to do with nostalgic value, I will admit. It's not a perfect film, but the combination of humor and horror just works so well, and I love the characters and dialogue. The nostalgia value has to do with the fact that it was the first horror movie my parents allowed me to watch when it was on TV one night back when I was 10 years old. I remember being so thrilled by the film, and excitedly sharing what I had watched the night before with my friends at school the next day. 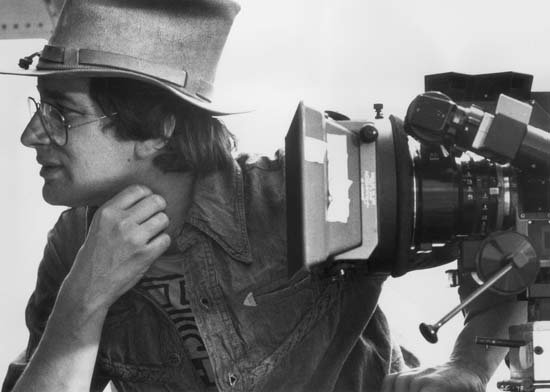 Spielberg, back in the day.
So, recently, I came upon a very early draft that Steven Spielberg wrote himself. This is back when he was attached to direct the film, before E.T. came along. Of course, there's the whole debate of who really directed Poltergeist. There has long been a debate as to who directed the film, even though it is credited to Tobe Hooper (best known for The Texas Chainsaw Massacre.) Many of the people involved with the movie say Spielberg was always present on the set, giving directions to Hooper or other actors. Whenever I watch the movie, I can't help but feel it has Spielberg's fingerprints all over it. The storytelling, style of suspense and sense of humor are very much in his style, and it's impossible for me not to think of this as a Spielberg effort. No offense to Mr. Hooper, who I'm sure contributed greatly, but I think if you really look closely at it, it's clear whose movie it is.
But I digress. This draft is not so much a script, as it is a collection of ideas for what would become the film written in kind of a synopsis form. At the time, the film went by the title "Night Time", perhaps a play on the title "Night Skies", Spielberg's aborted horror film about aliens which apparently was the main source of inspiration for the idea behind Poltergeist. It is dated March 31st, 1980 - 2 years before the film hit theaters on June 4th, 1982.

The most interesting thing about reading this early take on the idea is, naturally, the differences between it and the final film. The Freelings are still the family at the center of the haunting, although most of their names are different at this point, and they have four children instead of three like in the final version. It's also interesting to note that although youngest daughter Carol Ann is in the script, she doesn't seem to be the main focus of this early version. She does not get abducted by the spirits, nor do the spirits focus on her. In fact, there is no abduction at all. In this early stage, the ghosts are really just tormenting the whole family in different ways. The background behind the spirits is different, as well. In this draft, the spirits were actually the ghosts of 19th Century Pioneers that were massacred by Native Americans on the land the house is built upon. 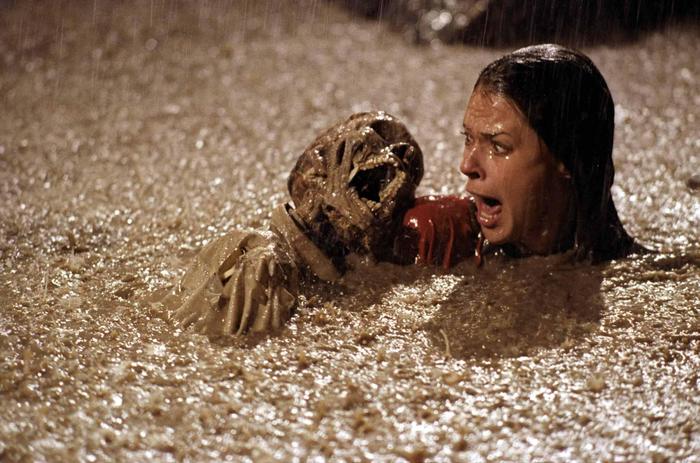 One of the plot points in this draft is that the Freelings' 14-year-old daughter, Angel, finds an old record while cleaning out the garage. It's a record of early Pioneer songs. The girl becomes obsessed with the record, and plays it constantly. Eventually, the record starts playing by itself, even when the daughter is not around. The ghosts still do enter the house through a TV signal, although everyone is asleep when it happens. Carol Ann does not notice it, as like I said, she has no connection with the spirits in this version. After the ghosts enter the home, various subtle paranormal activity starts to happen, such as food disappearing (the kids are blamed for this), and the furniture moving around. The Freelings also have a huge aviary in their back yard, where they keep a wide variety of birds. One morning, the family wakes up to find all the birds flying freely outside. The parents blame the kids at first for forgetting to lock the cage, but then they notice that someone or something has impossibly bent and twisted the bars open, allowing the birds to escape.

Other incidents dreamed up by Spielberg here is the mother (named Nora here) hearing someone swimming in the pool outside, and calling for whoever is out there to get ready for dinner. When there is no response, she goes outside, only to see the water being disturbed as if someone is swimming about, even though no one is in the pool. In another scene, the daughter Angel is getting ready for bed, when she sees a lump under her covers, making it look like someone is lying underneath. Thinking it is Carol Ann playing a joke on her, she pulls back the covers, only to naturally reveal that no one is there. 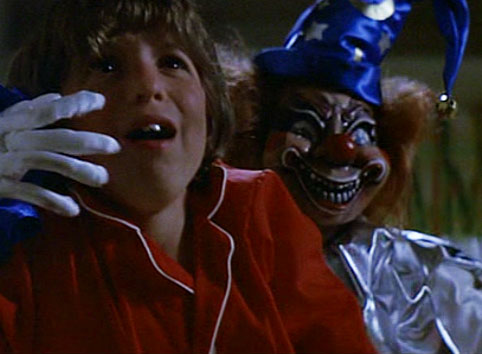 There is an extended sequence in this draft that never made it, which is too bad, because parts of it are kind of clever. It's a lengthy sequence centered around a night when the parents, as well as the older teenage kids, are going out for date nights, and leaving the two youngest kids alone with a babysitter. The night starts out on a bad note, with the father cutting himself while shaving because the previously mentioned record suddenly starts playing at full blasting volume, startling him. He gets angry, and breaks the record, which in turn angers Angel. Upset, she goes into her bedroom to prepare for her date. She begins to put on her lipstick, but when she looks in the mirror, a different person is looking back at her, putting lipstick on.

Wanting to get out of the house, Angel leaves with her older brother, as they are going with a group of friends to a movie. The parents leave when the 15-year-old babysitter arrives. Later that night, the babysitter has put the kids to bed, and they want her to tell them a story. She begins to tell a ghost story, but she is constantly upstaged by the actual hauntings going on around the house, which either accompany her story acting out what she is describing, or try to one up her by doing something even scarier than she can dream up. The babysitter becomes frightened, and runs out of the house, leaving the two youngest kids alone. When the Freelings come home, the two children are sitting on the steps, waiting, and tell what happened.

These events, and others such as Carol Ann being briefly possessed by a spirit while at the breakfast table and talking in a completely different voice, convince the Freelings to contact some paranormal researchers to investigate the house. While this is happening, they check into a hotel. That night, the parents try to make love, but the husband is possessed while in the middle of it, and starts making love much more harshly than the wife is used to. With all of the paranormal researchers and strange activity going on around the Freeling home, the neighbors start to get nervous. This brings about one of the more interesting aspects of this early version, in that the entire neighborhood becomes aware of what's going on inside the Freeling house, and band together to get them to move out, thinking that if the family leaves, all the strange activity will stop. Even more, as time passes, the hauntings are not just in the Freeling home, but also their neighbors, as they start hearing screams in the middle of the night in their homes. Everyone blames the Freelings for the paranormal activity spreading, and the entire family is shunned at work and school. It gets to the point that the Freelings have to have the police protect them from violent threats from the neighborhood. 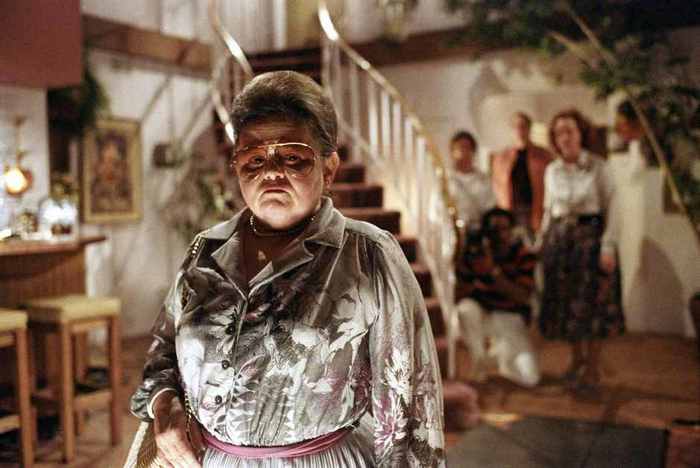 All the attention of what's happening in the neighborhood brings about the character of Tangina, who in this draft is an old lady who works for the National Enquirer. She is described by Spielberg as the "comic relief", but as someone who has tremendous psychic ability, and can actually speak to the spirits within the Freeling home. A lot of the ghost hunters and psychics who have been flooding the Freeling home have been fakes, but Tangina is the real deal, and she is the one who talks to the ghosts through the television, not Carol Ann.

The strange thing about this draft is that there is no real ending, although Spielberg does theorize upon what could be a final scene. He describes the final scene as the entire neighborhood being abandoned, while "ghost fires" (a flame-like entity that will suddenly appear and devastate anything nearby, but not spread to the rest of the home) flare up in all the homes, while TVs within every abandoned home implode by themselves. 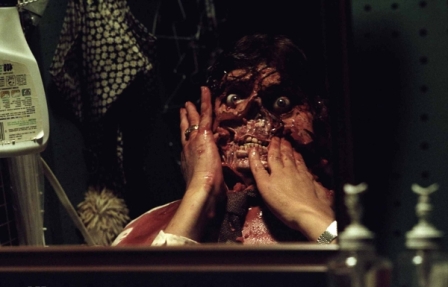 In a later addition, dated July 31st 1980, Spielberg seems to be toying with the idea of increasing Carol Ann's role in the story, and even giving her psychic abilities. He describes one scene where an angry mob of neighbors is outside the Freeling home, throwing stuff at the house, and demanding that the family leave. The family is cowering in the kitchen, sobbing and uncertain what to do. It's at that point that Carol Ann slowly stands up and walks to the window, looking out at the angry neighbors. With a content and calm look on her face, she looks up at the sky, and suddenly a storm of rocks and stones begins to fall from the sky, down on the angry mob. The mob disperses in fear, and while the Freelings stare at their daughter in shock, she simply giggles at them. Further updates, dated in early August, begins to suggest a stronger connection between Carol Ann and the spirits, and mentions that they are specifically following her, so the final approach of the film is slowly taking shape.

With each addition that Spielberg makes, we can see the movie taking shape. It really is a fascinating to read and see his ideas advance. As for my personal thoughts, there are some good ideas and bad ideas - Stuff I'm glad was dropped, and stuff I wish had made it into the final film. I like the idea of the haunting affecting the whole neighborhood, not just one home. Another element that I kind of like in later additions is having Nora, the mother, kind of becoming frightened of Carol Ann, since the ghosts seem to be built around her, and she starts acting strangely. She eventually begins to resent the child, which obviously horrifies her as a mother. 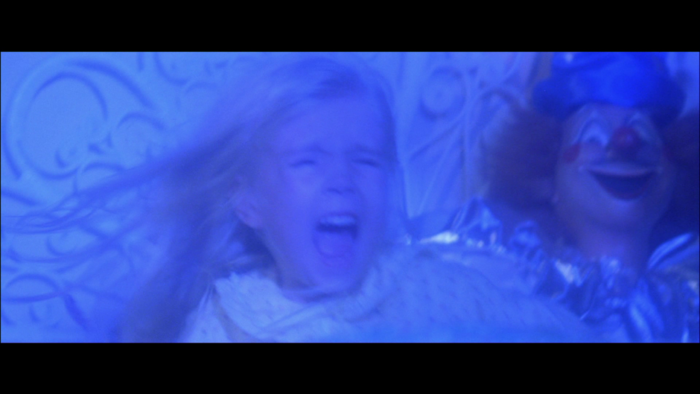 Really, the original Poltergeist remains a treasured favorite of mine, and this is a great way to see how it took shape. It's kind of a time capsule into Spielberg's original plan for the story.
12
Login To Vote!
More Articles From Keiichi77

8
Keiichi77
5 Movies That Changed from Script to Screen
Would you recognize them in their original form?
An unhandled error has occurred. Reload Dismiss