I was born in 1979 so the 80's and early 90's were where most of my best childhood memories come from. Although there are countless things to talk about like, cartoons, movies and games, the one thing that was most important to me as a child was the WWF Wrestling (now WWE).
I loved wrestling and could not get enough of it. I was seriously obsessed! I watched the shows every weekend and always had the latest magazine on hand to read about the most recent feuds. I even got to see wrestling live few times with my Grandfather at the Glenns Falls Civic Center in NY. Let's just say I was totally into saying my prayers and eating my vitamins brother! I was a total addict! I have not seen many (if any articles here relating to this topic so I hope it hits home with at least some of you!)


Now I know what you are all going to say- wrestling is fake! Yes, I realize this so thier is no need to point this out yet again! Over the last ten years or so wrestling has gone from an industry that hides it's secrets to one that reveals everything and is now more based on entertainment and shock value rather than promoting itself as a real sport.

***Keep in mind that as a youngster in the 80's, wrestling was very real to myself and my friends and insider secrets were not yet common knowledge.

So for this article I will betalking about Wrestlers from the WWF era:

For those of you that have watched wrestling over the years- you will undoubtedly recognize the difference!

For this article, I would like to look at five great wrestlers that were never "household names" but were very memorable for me in the context of my childhood. In future article I will look at other wrestlers of notable mention but for now I'm going to stick with some that not everyone may know but deserve mention.

Mr. Perfect was awesome. He was an egotistical conceded jerk but wickedly entertaining. I remember he used to do promos where he would do something very hard, but accomplish it perfectly. (Like knocking down a 7-10 split in bowling) He would then look into the camera and smuggly say, "now that's Perfect".
This guy was never the strongest wrestler but always hung in there by using technique over power. He was a technical wrestler and his finishing move, the perfect plex, was really cool to see. His arrogance made you want to hate him but it also made you want to keep watching.
Sadly to say, Mr. Perfect (Curt Henning) died in 1993 of acute cocaine intoxication. 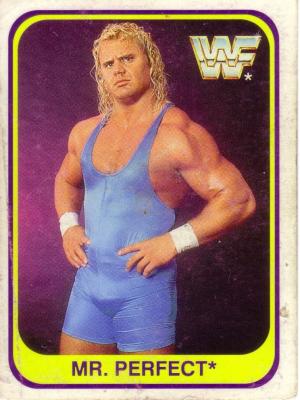 The BBM was a huge guy and his story was that he was a former prison guard. He came to the ring with a nightstick and would use it to beat his opponent senseless whenever he had the opportunity.
The one memory of the BBM that really makes him stick out in my mind is when he fought Hulk Hogan in a steel cage match on Saturday Night's Main event in 1988. This show aired at like 10pm or11pm so at 9 years old, I normally was not allowed to watch. This however turned out to be my lucky night. I begged and begged and eventually my mom gave in and let me stay up to watch. Needless to say, it was awesome!
In the early 1990's my aunt went out to dinner with my uncle and got lucky enough to meet the Big Boss Man in person. My aunt explained to him how big of a fan I was and he graciously signed an autograph for me.
Although the BBM went through multiple stages of being a good guy and bad guy, his in ring persona and promos helped him to stand above the pack.

Sadly, the Big Boss Man (Ray Taylor)died of a heart attack in 1994. 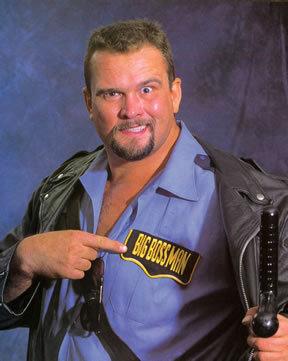 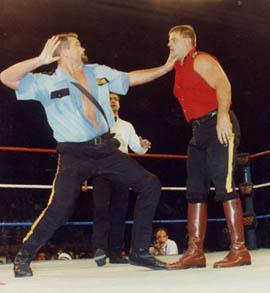 Ravishing Rick Rude (RRR) was the 80's version of a Chip and Dales dancer turned wrestler. His whole story line was that he was in awesome shape and had a physique that no women could resist. During his ring entrance he would strut to the center of the ring, pose for a few moments and bring a women from the audience into the ring for a kiss. He was one of, if not the most conceited wrestlers of the time.
The reason I remember Rick Rude so well is his famous "Pose Down" with the Ultimate Warrior. This took place at the Royal Rumble in 1989 and they each took turns showing off their physiques by performing various bodybuilding poses. The contest winner was to be determined by the audience and at the time, Rick Rude was a heel while the Warrior was a fan favorite. As can be expected, the audience awarded the victory to the Warrior. Needless to say, the Ravishing one, felt cheated and ended up beating the Ultimate Warrior senseless with a flex bar- ah memories! Following this event, the two ended up fueding for the next few years and I distinctly remember them going back and forth at different pay per views.
Ravishing Rick Rude died suddenly of heart failure in 1999. The cause was rumored to be of a mix of drugs to include anabolic steroids but this is not the official cause of death. 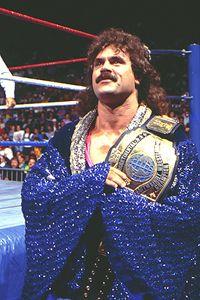 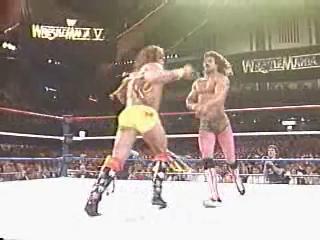 It's pretty easy to describe the Honky Tonk Mans' ring persona. He would come to the ring dressed like Elvis Presley. He would sing Elvis inspired songs in the ring prior to matches and many of his moves were based on Elvis songs, such as his "shake rattle and role" finishing move.

Most people remember the Honky Tonk man from his record setting loss to the Ultimate Warrior during the inaugural Summer Slam event in 1988. In this match the Honky Tonk Man last the Intercontinental belt to the Warrior in a record setting 29 seconds. This is still the shortest match concerning a major championship in WWF/WWE history. Prior to losing the belt, the Honky Tonk Man held the title for a still unmatched 64 straight weeks.
I remeber Honky Tonk Man for another reason though. Following high school (1997) I joined the Army on active duty. This was long after Honky Tonk Man had disappeared from the ranks of the WWF. During my training in Oklahoma, a wrestling organization (I don't remember the name) did a special show for the troops at the base. I was lucky enough to go and to my surprise, the headliner was none other than the Honky Tonk Man! I had a chance to meet him, get an autograph and have a picture taken. Although I was an adult at the time, it was still a thrill to have the chance to meet a person that as a child, I placed on a pedestal. 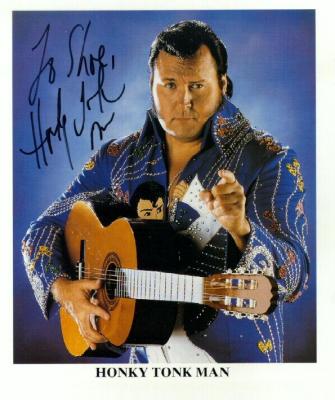 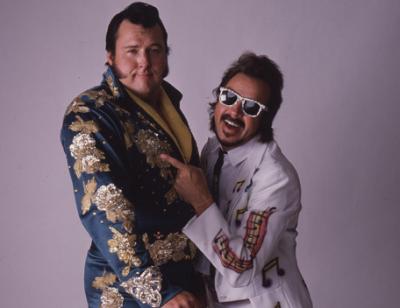 I'm fairly sure that most people would recognize the name Brutus "the Barber" Beefcake. He as a wrestler with a boisterous personality and he was known for cutting the hair of his opponents in the ring after beating them.
My friends and I loved the Barber! We would wait patiently for his matches so we could watch him cut the hair of one of the latest bad guys and when he did, it was well worth it! Brutus was closely aligned with Hulk Hogan (they came into wrestling together and were friends in grade school) and his personality and charisma made him stand out with the fans.
Many people don't know this but Brutus the Barber Beefcake was slated to be the next in line after Hulk Hogan to carry the WWF into the future. With an aging Hulk Hogan carrying the company torch, Vince McMahon (owner WWF) was looking for his next superstar to bring the company into the 1990's.
At the time, their was another up and coming wrestler, the Ultimate Warrior, that was also making a huge impact with WWF audiences. As the sole decision maker, Vince McMahon was trying to decide who to push into the spotlight, Beefcake or the Warrior.
Due to very untimely injuries to Beefcake in the late 1980's, McMahon's choice was made much easier and the Ultimate Warrior was given the green light to rise to prominence. The Warrior went on to be a huge hit and household name evening beating the legendary Hulk Hogan at Wrestlemania 6.
If it were not for the series of unfortunate injuries suffered by Brutus "the Barber" (including a face crushing parasailing accident in 1990) their is a good chance Brutus would have been the face of the WWE as we know it today but fate was not in his corner.

Edward Leslie also known as Brutus Beefcake now lives in Massachusetts and does some wrestling on the independent circuit and is a member of the Christian Wrestling Group. 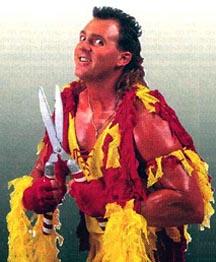 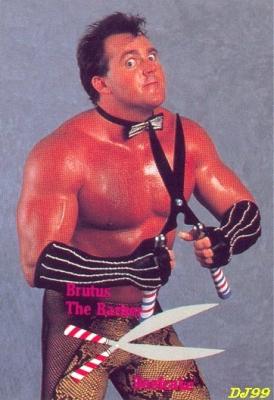 That is the end of my article and I hope you all enjoyed it! In the near future I will be putting together a Volume II of great forgotten wrestlers of the 80's as well as a special "tag-team" edition. I look forward to reading all of your comments!!!!!

38
Quote O' Matic
Tom: "The hospital let you folks out on many field trips? -Tom"
Roseanne and Tom: Behind the Scenes